A deaf black woman was pulled over and handcuffed by police in North Las Vegas on April 7, as officers requested that her distressed 11-year-old twin daughters interpret for them.

NORTH LAS VEGAS, Nev. - Video showing the dramatic detainment of a Black deaf woman as police ask her crying children to interpret for her is going viral after the woman documented the entire incident during a Facebook live on April 7 in North Las Vegas.

Andrea Hollingsworth was waiting in her car with her two 11-year-old twins in the backseat after moving out of her ex-friend’s home, according to a North Las Vegas police report.

Hollingsworth, who is deaf and cannot read lips, had returned to her former friend’s home to retrieve $200 she had originally paid for rent but felt was owed back since she moved out of the home, police said. 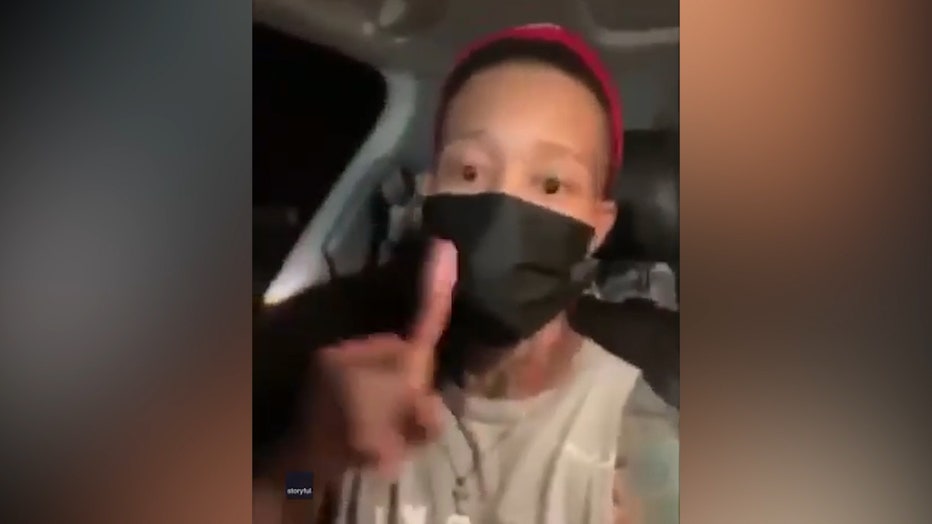 While Hollingsworth waited in her car, officers were dispatched by Hollingsworth's ex-friend, identified as Latina Jones, who claimed she was being stalked and harassed by Hollingworth and feared for her safety.

Officers arrived at the scene at about 10:40 p.m. and confronted Hollingsworth in her car.

Hollingsworth began to stream live to Facebook, appearing to be confused and signing to the recording device. The officer at the scene attempted to communicate with her why he was there, however, Hollingsworth is deaf so the officer had to ask her two daughters to translate for him.

According to the U.S. Department of Justice’s guide for law enforcement officers, when dealing with deaf citizens or those who are hard of hearing, family members should never be used to interpret unless it is an emergency.

In the video, the officer asks Hollingworth to get out of the vehicle, however, Hollingsworth is unable to understand or hear the officer.

The officer, after asking several times for Hollingsworth to get out of her car, can be seen pulling her out by her arm.

Hollingsworth is told several times to sit down on the curb but does not seem to understand the officer’s command, despite her daughters translating in American sign language, according to the police report.

Video only allows viewers to hear the commotion as the officer eventually appears to force Hollingsworth to sit down, which is followed by screams and cries from her two daughters.

Hollingsworth's recording device then falls to the ground and is looking up toward her chin and the officers as they tell Hollingsworth’s daughters to translate that she needs to put her hands behind her back.

Then, all of a sudden, Hollingsworth appears to lunge forward and a scuffle ensues as her children continue to scream in the background.

Officers at the scene reported attempting to get Hollingsworth to sit down on the curb multiple times before they resorted to putting her in handcuffs for her behavior.

While Hollingsworth was detained by officers, her daughters spoke to another officer at the scene explaining why they were waiting inside the car, after which the video ends.

Officers determined no crime was committed and this was a civil dispute and let Hollingsworth go, the police reported concluded. Hollingsworth did not report any injuries.

Hollingsworth’s Facebook live has garnered over 75,000 views as of April 19 and thousands of comments, many of which reprimand the way officers handled the entire situation. Some commenters even said the officers who had Hollingsworth’s daughters interpret for them was uncalled for and unprofessional.

"We take all concerns from the community very seriously and have investigated the circumstances surrounding the video. Officers initially responded to a call from a woman who reported she was afraid to return to her home due to harassment by a former roommate, who was waiting in a vehicle for several hours outside of her home. The driver, who indicated she was deaf, initially refused to comply with requests and was briefly detained until police completed their investigation. No charges were filed in the case," according to an emailed statement from the North Las Vegas police department.

Pro Bono ASL, an organization of hearing and deaf ASL interpreters, has organized a fundraiser for Hollingsworth and her children.

RELATED: Daunte Wright's funeral to be held April 22 in Minneapolis

"The horrible events that occurred are in direct violation of the Americans with Disabilities Act," Pro Bono ASL wrote in a description, citing the U.S. Department of Justice’s guide for law enforcement officers. "Children should never be forced into interpreting for their parents, especially in such high stakes situations."