LEALMAN (FOX 13) - What looked to be a house fire turned into an explosives investigation Wednesday morning.

Lealman fire officials say the fire was contained to the detached garage of the house on 77th Way N. The roof had collapsed by the time firefighters got there, but everyone was able to get out of the home safely.

When they started their fire investigation, they say they found homemade explosives inside the garage.  The Pinellas County Sheriff's Office was called in to help with the investigation.

They believe the blaze started as some sort of a domestic situation.  They are still looking for one of the residents, identified as Roy Bates.

Lealman fire officials say they believe Bates started the fire intentionally while his wife was inside the home. Deputies say he will face domestic violence charges.

Neighbors describe Bates as a disabled veteran who had several frivolous disputes with neighbors. They say the police have been called repeatedly for Bates' violent behavior.

"Monday she knocked on my door, borrowed my phone, explained Roy had gotten out of his Baker Act, or whatever, early, showed up took the car, took her phone, took her keys and locked her in the bedroom," said Gillingham.

Bates does have an arrest record, including an arrest in 2015 for disorderly conduct toward a neighbor. 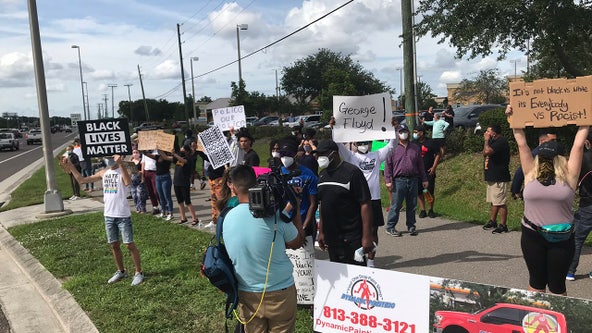