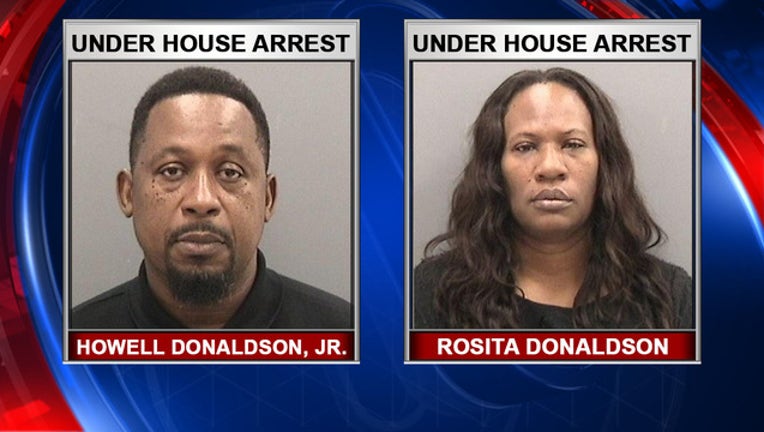 TAMPA, Fla. - The parents of the accused Seminole Heights shooter have officially been placed under house arrest after choosing not to cooperate with an investigation into their son.

Howell Donaldson, Jr. and his wife Rosita had until Wednesday evening to report to the Hillsborough County Sheriff’s Office to be placed on the county’s GPS monitoring system. The Donaldsons were found in civil contempt of court on Friday for refusing to answer state prosecutor’s questions about their son, Howell Donaldson III.

On Wednesday morning, both were booked into jail, but were quickly released to fulfill their house arrest, which could be for a maximum of five months and 29 days, or until they decide to cooperate with the State Attorney’s Office’s investigation into their son.

They were told by Hillsborough County Judge Mark Wolfe they can’t leave their home unless it’s for work, church or doctor appointments.

On Friday, both were scheduled to appear in court at 9 a.m., but didn’t show up. However, they appeared after a judge ordered their attorneys to bring them.

State Attorney Andrew Warren said during Friday morning's proceedings, it was not the prosecution’s intent to have the Donaldsons end up in jail.

"That’s why we were willing to bend over backward," Warren explained. "We offered to limit our questions only to information we didn't want sprung on us at trial. If they had some information that was going to exculpate the defendant. We weren't ever going to ask them for anything incriminating."

The Donaldson's attorney Ralph Fernandez said the parents know the consequences, but what’s happening with his clients has not happened any other in the country.

"This is a bad day situation developing out of Tampa, Florida when you compel somebody to testify against their own child," said Fernandez.