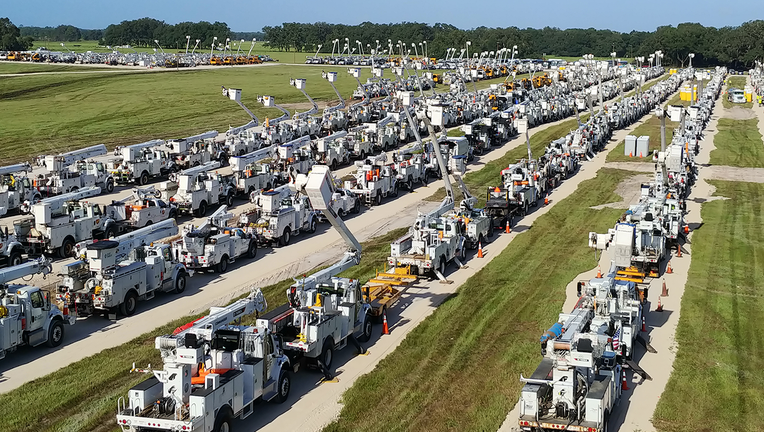 Duke Energy shared this photo of power crews preparing for a possible hit by Hurricane Dorian in September of 2019.

TALLAHASSEE, Fla. - Duke Energy Florida customers next month will start seeing extra charges on their bills to cover the utility’s costs of preparing for Hurricane Dorian, a mega-storm that threatened to smash into the state in September before turning away.

The Florida Public Service Commission on Tuesday approved a proposal that will allow Duke to collect $171.3 million from customers to cover costs related to Hurricane Dorian and the much-smaller Tropical Storm Nestor, which caused damage in the Panhandle.

The extra charges are slated to last for a year and will translate to an extra $5.34 a month for residential customers who use 1,000 kilowatt hours of electricity each month, a common industry benchmark. While Duke will start recouping the money next month, the Public Service Commission in the future will analyze the utility’s costs from the two storms, which could lead to refunds if the utility collects too much.

The commission approved Duke’s proposal with little discussion during a brief meeting Tuesday.

“Florida utilities had to mobilize a significant workforce to prepare for possible storm damage and be positioned to restore power as quickly as possible following Hurricane Dorian and Tropical Storm Nestor,” commission Chairman Gary Clark said in a prepared statement after the meeting. “We will continue to scrutinize storm costs to minimize the impact on customer bills and ensure that Florida remains the leader in disaster preparation and post-storm restoration.”

Regulators in the past have regularly allowed utilities to recoup storm costs from customers, and the issue is addressed in a 2017 rate agreement reached by Duke. The utility, which has about 1.8 million customers in Florida, said it had to mobilize 7,800 employees and contractors to be able to restore power if Hurricane Dorian hit the state, as had been initially predicted. 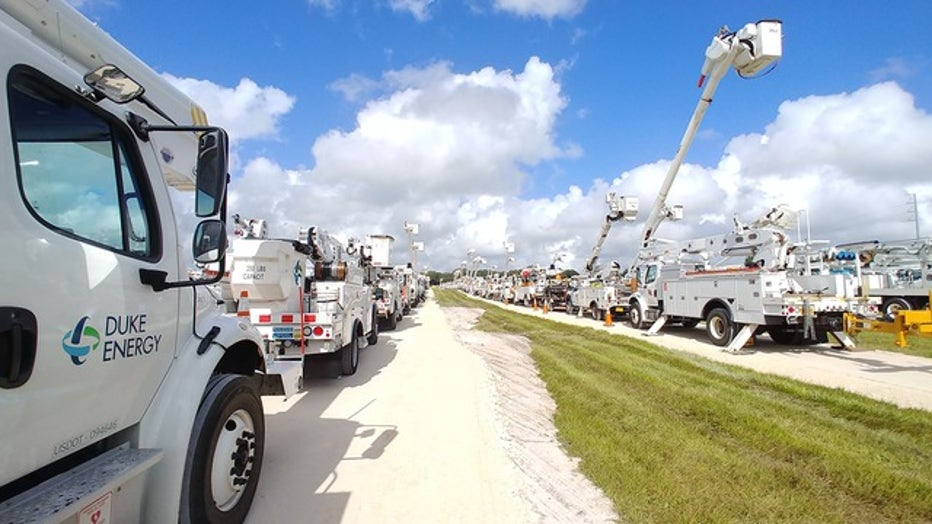 Duke Energy shared this photo of power crews preparing for a possible hit by Hurricane Dorian in September of 2019.

Patricia Christensen, an attorney with the state Office of Public Counsel, which represents consumers in utility issues, said the 2017 Duke rate settlement allows the utility to collect the costs, subject to the analysis in a future hearing. But she said the office also has concerns about the issue, as Hurricane Dorian and Tropical Storm Nestor “had little to no impact on Florida.”

“We recognize that Hurricane Dorian was a Category 5 hurricane that was expected to hit Florida and impact multiple utility territories, and it was prudent to engage in some level of pre-storm preparedness,” she said. “But we believe that as a matter of policy, the commission needs to look at, what is the appropriate level of the pre-storm preparation and how much of those costs should be borne by the utility customers.”

Florida Power & Light during an October earnings report said that its preliminary estimate of Dorian costs totaled $274 million. But FPL is not increasing customers’ bills, instead using an amortization method for the costs.

FPL last month touted that no additional costs would be added to customers’ monthly bills.

But the Office of Public Counsel has objected to the way FPL has handled the issue, with Christensen saying, in part, that it means FPL customers will likely not get a full hearing to scrutinize the utility’s storm costs.