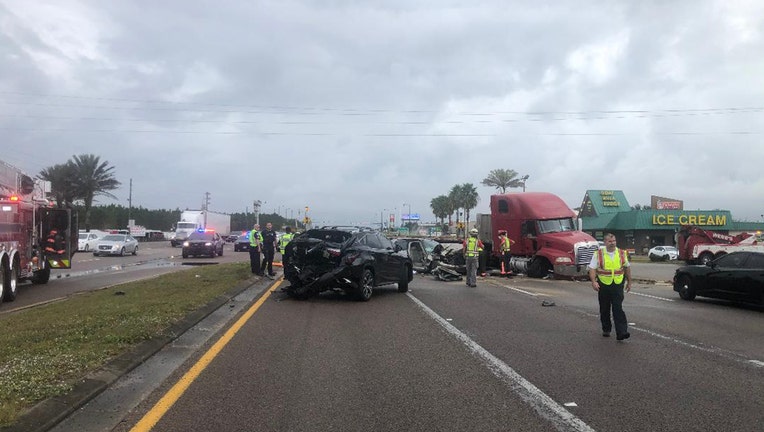 DAVENPORT, Fla. - Multiple vehicles were involved in a crash that closed the southbound lanes U.S. Highway 27 in Davenport, and claimed the life of a passenger.

The collision occurred at South Boulevard West, closing that intersection, in front Webb's Candy Shop. According to the Florida Highway Patrol, the crash involved four vehicles, including a semi-truck.

Investigators said, according to preliminary information, a 45-year-old driver from Lakeland was heading east in a Peterbilt truck on South Boulevard West approaching U.S. 27. They said he failed to remain at a stop sign and drove into the intersection.

Troopers said the driver entered the path of a semi-truck, driven by a 27-year-old man from Davenport, who was heading south on U.S. 27. The truck driver swerved to avoid a crash and lost control of the semi-truck.

The semi-truck collided into the rear of 2016 Lexus SUV driven by a 29-year-old woman from Clermont. The female driver was also heading south on U.S. 27, but was in the left turn lane to turn onto South Boulevard West.

The semi-truck continued traveling into the northbound lanes of U.S. 27 and into the path of a 2004 Cadillac vehicle, crashing into the front of the car.

Every other driver, expect for the driver of the Peterbilt truck, had minor injuries.

Haines City police said U.S. 27 will remain closed from Bates Road to North Patterson Road until further notice. They are asking people to avoid the area.

There is no word yet on when lanes will reopen. Troopers said it’s possible charges will be filed.