Two agents appeared to go inside the camper during their visit to the home Thursday.

NORTH PORT, Fla. - FBI agents returned to the home of Brian Laundrie on Thursday, but did not stay long. There was no official word from the agency on why they were there.

It was not long after 1 p.m. when the two agents pulled up to the North Port home, where Laundrie’s parents also live. The agents went inside with a "large paper bag," FOX News reported, and they took a closer look inside the family’s parked camper.

The agents left about 30 minutes later.

An attorney for the family downplayed the FBI’s visit.

"The FBI is at the Laundrie home today to collect some personal items belonging to Brian that will assist the canines in their search for Brian," Steven Bertolino told FOX 13 News. "There is nothing more to this."

Polk County Sheriff Grady Judd responds to a question about the search for Brian Laundrie, which is not in his local jurisdiction: 'We would never have let him out of our custody.'

Laundrie, 23, is the only person of interest in Gabby Petito’s disappearance, and is wanted on fraud charges connected with the case.

Laundrie and Petito were on a cross-country van trip until he abruptly returned to Florida with their van, but without Petito. Her body was later found out west.

Laundrie’s parents reported him missing over two weeks ago, telling police that he headed to a preserve near their home without his wallet or phone. A weeklong manhunt at the swampy preserve failed to find him.

During their brief stop, the FBI agents appeared to take an interest in the family’s camper, which is parked in the driveway outside the home. The family took Brian camping at Fort De Soto after he returned from the van trip, but according to their attorney, Brian left the campsite with his family. 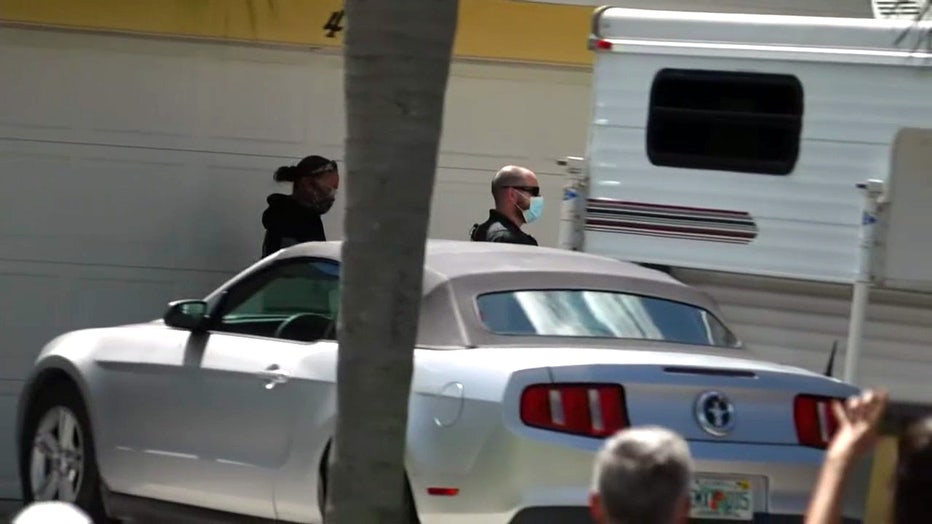 Agents look over the family's camper.