Video provided by the Florida Department of Law Enforcement shows portions of the morning officers executed a search warrant at the home of a former state employee.

TALLAHASSEE, Fla. - The Florida Department of Law Enforcement released body camera video from December 7, the day officers executed a search warrant at the home of Rebekah Jones, a former Florida Department of Health employee who is accused of improperly accessing an internal messaging system at the agency. No charges have been filed.

In a statement, FDLE complained officers' actions at Jones' home -- part of which were shown by a video posted on Twitter by Jones -- have been "vilified over the past few days."

Jones was the data scientist behind the Florida Department of Health COVID-19 dashboard, but was removed from her job in May due to "insubordination." Afterward, Jones launched her own website which closely resembled the state's COVID-19 dashboard. At the time, Jones said she believed she was fired for refusing to alter state data for the website.

According to the search warrant, officers were investigating a message sent to about 1,750 state employees through a system used to "coordinate the state's health and medical resources, capabilities, and capacities."

The message sent through the system said, "it's time to speak up before another 17,000 people are dead. You know this is wrong. You don't have to be part of this. Be a hero. Speak out before it's too late."

The search warrant said that all users of the messaging system who are assigned to the group that received the Nov. 10 message share the same username and password, however, the state says its investigation found that the IP address used to log in using the shared username and password was connected to Jones' address.

In a Dec. 7 statement, FDLE Commissioner Rick Swearingen said agents announced themselves to Jones by phone and at the door "for 20 minutes" before Jones opened the door.

"After several attempts, Ms. Jones allowed agents inside.  Agents entered the home in accordance with normal protocols and seized several devices that will be forensically analyzed. At no time were weapons pointed at anyone in the home. Any evidence will be referred to the State Attorney for prosecution as appropriate," Swearingen's statement said.

In a tweet, Jones said police officers seized "hardware and tech" from her home and pointed guns at her and her children. 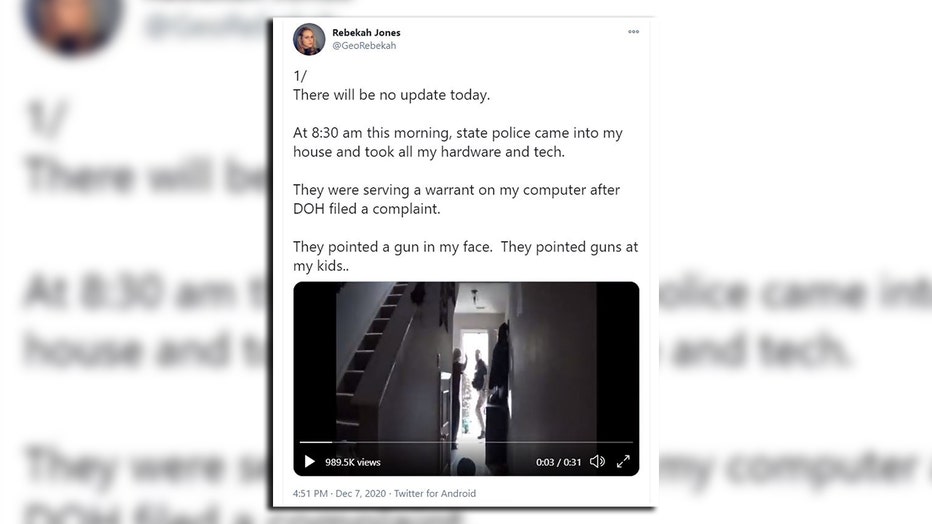 FDLE says its body camera video shows Jones brought the situation upon herself.

"As this video will demonstrate, any risk or danger to Ms. Jones or her family was the result of her actions," an FDLE statement said. "Because of inaccurate and incomplete statements given by certain individuals, the body camera video taken from outside the home is being made available. FDLE is comfortable with the release of this video because it will not interfere with the cybercrime investigation."

Several portions of the audio are redacted and some of the video is blurred.

The body camera begins at 8:25 a.m. when a female Tallahassee officer and a male FDLE agent first knock on the door. For the next 8-9 minutes, the agent and the officer knock on the door and discuss whether there is a dog inside the home. During that time, the male officer appears to walk to the back of the home, which FDLE says he did in its statement.

At 8:33 a.m., the agent says he thinks he saw someone inside, but it's not clear where this occurred. The officer then continues to knock on the front door and announce her presence as police. 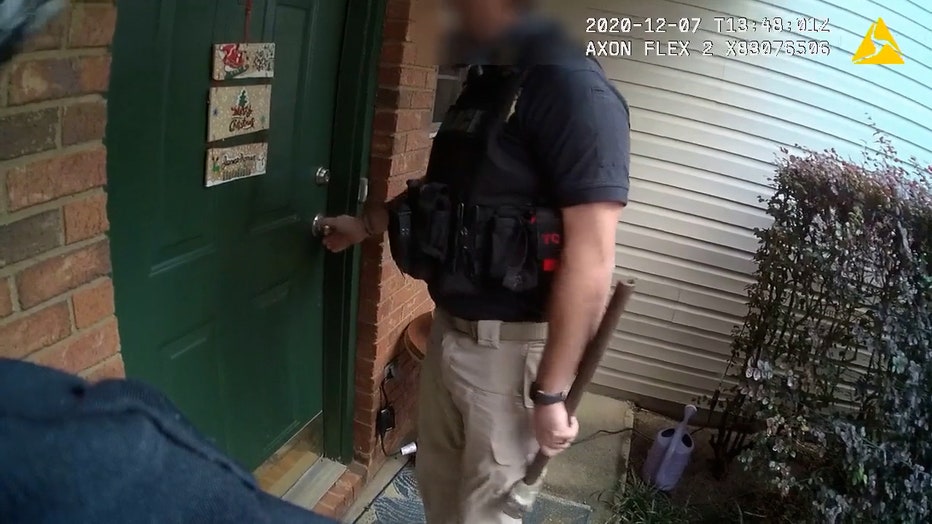 The male agent turns the handle to open the front door once, but it was locked.

At 8:36 a.m., the female officer returns to her vehicle. It is unclear what the male agent is doing during this time and it appears another officer has appeared on the scene at an unknown time.

At 8:38 the female officer walks over to a vehicle parked nearby on the roadway. Then the male agent walks over to say he thought he could hear a child inside.

Jones' residence appears to be a townhome or condo, without separation between units.

At about 8:40, the agent seems to be speaking to someone through the door, but no sounds are audible on the body camera video.

The officer begins trying to call Jones' number. The voicemail message is audible on the body camera video and can be heard picking up before the phone rings.

By 8:45, two more officers or agents have appeared on the scene. One of them is holding a sledgehammer. At 8:47 he begins banging on the door and yelling "police, search warrant, open the door." 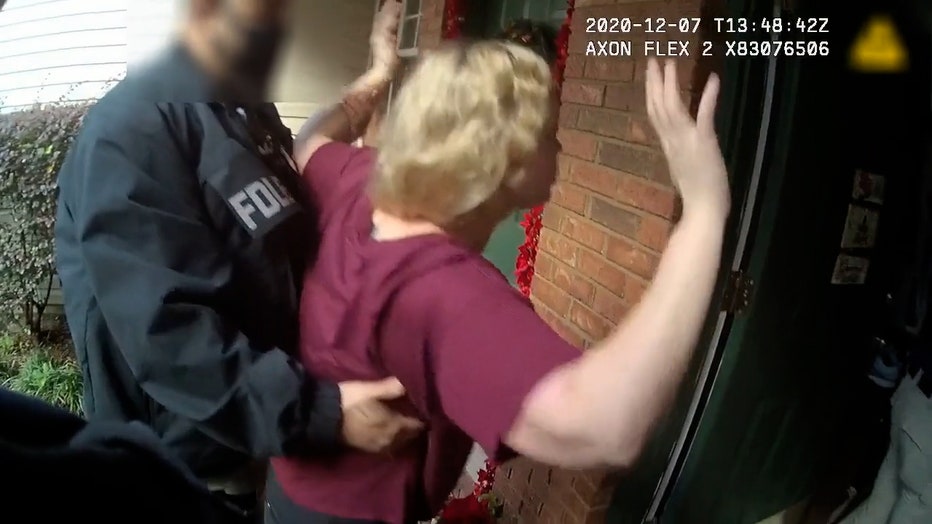 At that time, Jones can be heard from inside and opens the door in under a minute.

The body camera video from FDLE does not show what happened inside the home. Video recorded by Jones and posted on Twitter shows a portion of what happened. 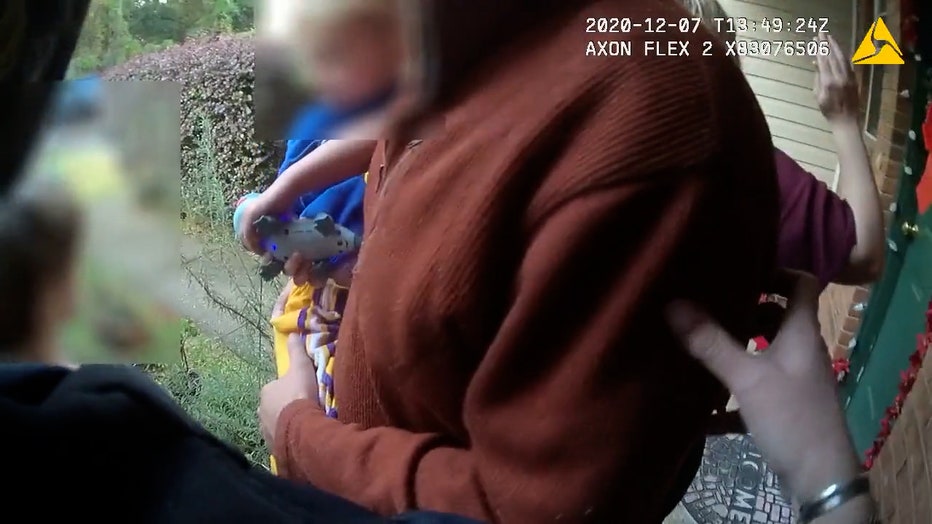 In the video, a woman, presumably Jones, opens a locked door and a man wearing a black vest pulls her outside by the arm. Another man wearing a vest comes through the doorway and pulls out a gun.

Another man comes in with his gun drawn and points it upward toward a staircase.

Jones: You want the children down?
Officer: Call them all down.

At least five officers with guns and wearing vests can be seen entering the home.

As another officer speaks inaudibly to Jones, other officers can be heard yelling up the stairs.

Officer: Police. Come down now, search warrant!
Jones: He just pointed a gun at my children!

In another tweet, Jones said officers took her phone and the computer she uses "to post the [COVID-19] case numbers in Florida, and school cases for the entire country."

She said the officers also "took evidence of corruption at the state level."