FISHHAWK, Fla. - Two homes in the Tampa Bay area suffered heavy damage after fires broke out on the Fourth of July, and firefighters say fireworks are likely to blame.

Hillsborough County Fire Rescue responded to a report of a fire around 9:45 p.m. Monday at a home on Soratrace Street in Fishhawk. The homeowner told dispatchers the fire started in their garage and was spreading throughout their home.

Firefighters said heavy smoke and flames were going through the roof of the garage and central part of the house. Crews initiated a defensive attack to keep the fire from spreading to other homes.

RELATED: Riverview boy, 11, back home after lightning strike knocks him out of boat

The homeowner told firefighters he had disposed of used fireworks in a cardboard box in the garage, believing they were no longer lit, but did not extinguish them with water. Investigators believe the heat of the fireworks started the fire in the box, which rapidly spread throughout the garage and the home.

"They started smelling smoke, saw a haze and it wasn't until he went to the garage that the garage, by the time he got there, was fully involved," said Rob Herrin, a spokesperson for Hillsborough Fire Rescue. "Don't just assume because time went by that everything is cool enough now for you to put them in your garage, in a garbage can or anywhere near a structure. You have to dilute it with water."

The owner was able to rescue two of his three dogs, but the third was still missing. 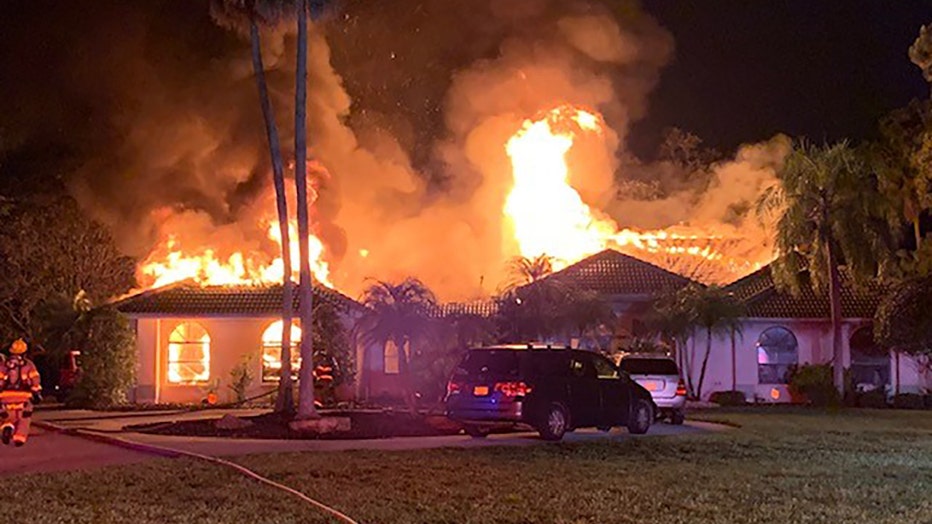 About 30 minutes later, firefighters in Sarasota County responded to another fire at a home in the 5000 block of Ashley Parkway at approximately 10:15 p.m.

The fire was extinguished around midnight and all residents were reported safe, but one firefighter was injured while battling the blaze. Firefighters said fireworks may have caused the fire.

No serious injuries were reported as a result of any of the house fires.