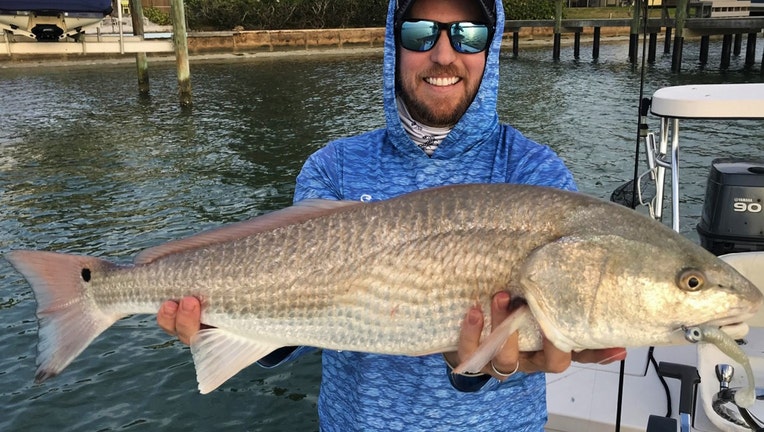 We are unfortunately closed due to the COVID-19 issues around our area, and we will remain closed through April. Tentatively planning and hoping to ppen up Friday, May 1 but time will tell.

However, we still have some great fishing report information from our area to share with you guys.

Snook action continues to heat up as summer approaches with lots of snook moving into the passes and onto the beaches. However, we still have plenty of fish up in the bay being cooperative on the flats too. Most of the bigger adult fish are the ones who migrate to the passes and beaches and, ultimately, near shore to spawn while the smaller schoolies stay back up in the bays and on the flats.

The best snook fishing in the passes happens at night at the start and end of the outgoing tides, but incoming works well too. The early morning hours are just as good as the night if the tide is right as well.

During the day, the best action is around the beaches and on the flats. Soft plastic paddle tails and flairhawk style jigs are great artificial lure options for snook. Live white bait, finger mullet or grass grunts also called pigfish are awesome live bait options.

Redfish action has been hot this past week around the docks, oyster bars and other structures. We are seeing quite a few around residential docks still even as the water warms up a bit, typically this is more of a cooler water hangout for the redfish. The flats have held lots of redfish this past week too, but they like to find those ambush points to feed on passing baits.

Trout action has been great at night throughout the area on the dock lights and bridge lights, but around the passes where water is moving has them feeding heavily. During the day the grass flat edges, potholes and cuts are great places to find feeding trout.

There is still some large trout being caught throughout the area despite the warmer weather, but they are starting to thin out.
Mackerel action is great around the mouth of the bay, the passes and right along the beaches. Plenty of fish feeding on bait fish schools throughout the area. They love the faster-moving baits especially if they have some flash to them as you retrieve them quickly along the edges of the bait schools or structures the mackerel have the bait pinned up against.

Look for diving seabirds to find the mackerel feeding heavily below. It is a great time to go get some good eating mackerel to take back home.

Flounder bite has improved this past week. Seeing some nice ones towards the tail end of the outgoing tides in our passes. However, throughout the area adjacent to the flats on the sandy bottom and around bridges, docks, and seawalls you can find these guys waiting to ambush baits right on or near the bottom. Flounder love the slow-moving soft plastics for artificials, or the small pinfish, mud minnows or live shrimp for live bait.

Jack crevalle are not the highest food quality fish, but they are tons of fun to catch and they are easy to find this time of year on occasion. These guys are nicknamed ‘canal tuna’ because once you hook-up, they take you on quite the ride. Pound for pound probably one of the hardest fighting fish you can catch inshore, and do not get me started on accidentally hooking a big boy offshore.

These fish travel in massive schools around the flats and along the shorelines of our area about this time of year searching to devour any bait schools they come across in piranha-type form. You can literally hear it before you see it on most occasions and the birds will help you find them too.

Look for massive splashes on the surface well above and beyond what you’d see when the bait is being pushed to the surface by mackerel. These guys go wild thrashing and flopping about at the surface as they tear apart bait populations.

You can literally throw ANY lure you have rigged into the mess and just hold on tight, but make sure you have your drag backed down because they will break your line, your rod, or your hook in a hurry with their frantic and blood pumping runs!

Mangrove snapper are starting to pick up around the bay area as the water warms and we're seeing a little increase in their average size around the bridges, docks, jetties and passes. These guys love when the water warms, and they get in massive schools and love to eat just about anything small passing by the structure.

Small hooks, light tackle, and minimal weight and a small piece of shrimp is a great way to target them. However, many are caught right now while targeting trout and redfish around the residential dock lines.

Hogfish action is still going okay near shore, but it has definitely slowed a bit lately as the water is clearing up and warming up too. They get more leader-shy, less aggressive and they see more divers swimming down and shooting their buddies this time of year.

You can still catch them all through the year from around 30-40ft up to around 70-90ft of water fairly consistently, but the best action is around October until early April depending on the cold fronts and weather. Lighter tackle is important this time of year to get them to cooperate.

When we start fishing again around 20lb is going to get you the best opportunity for bites while 30lb would be the max you would attempt for hogfish. During cooler months, typically 30-40lb is what we use for these fish on our leader strength. Around 3-4ot hooks is still best with the lightest possible weights for the most premium natural presentation.

Offshore they get bigger for sure, but the lane snapper fishing is best near shore. Mangroves are biting well too around this depth range of 60-100ft.

Red grouper action is going well around the deepest near shore waters, but they are bigger and more plentiful a little deeper offshore. However, we're seeing some good numbers and action inside the 100ft mark as shallow as around 70ft of water on squid strips, live pinfish, big threadfins and the occasional buck tail large soft plastic. Hard-bottom potholes and swiss cheese is the best places to hunt these red groupers where you see the bait shows up in the water column.

Cobia are showing up more and more around the area near shore and offshore. These guys love to eat a tail-hooked pinfish that you flip out there to them on a pitch rod you have rigged and ready in a rod holder while bottom fishing. Never forget your pitch rods when near shore or offshore fishing but spring and fall it's even more important as pelagic action is typically at its peak.

Tuna action is going well near shore around the deeper parts. However, they can be sporadic and tough to find super consistently but those cruise ships sitting in 60-100ft have been a great place to start off the Egmont key channel. These guys love the rapala xrap magnum trolling plugs in the more natural color patterns, but you can catch them vertical jigging or flat lining the tail hooked pinfish or threadfin too.

For cobia and tuna, around 40-50lb floro leader with around a 4-5ot single circle hook is my favorite set up for the flat line/pitch rod. Many use the kingfish stinger rig for all flat line or pitch rod set ups but for the cobia and tuna a floro leader is best, but you're playing a dangerous game if a kingfish grabs it because it won’t stand up often to their toothy mouths.

Kingfish and mackerel are still thick near shore too, but we are approaching that time of year when they start to dwindle. Each front prolongs their stay a bit longer but as the fronts get further apart and weaker and weaker the water will continue to warm and the kingfish will move north out of the area, or west to deeper water where they can find the right temperatures to chill out for the hottest part of our summer before they run back by us to head south for the winter.

We're hoping to re-open May first with some 39-hour action!

Triggerfish are getting ready to close for harvest starting May 2, making end-of-day on May 1 the last time to land them for 2020, unless the season gets extended due to lack of quota being landed.

This is a discussion I have heard among the private rec and charter for hire fleet often as of late with all that’s going on in the world, but unfortunately I am here to say that it will most likely NOT be extended. Due to the virus, the dockside intercepts and other integral parts of fishery surveys for the state and fed fisheries managers have ceased. That ,coupled with the fact the season was set based on projections of landings, there is likely no possible way that the federal mangers will extend the gray triggerfish season this year.

Hopefully, it will just mean more fish stay in the water and we get a stronger spawn for more fish down the road in the next stock assessment.

Triggerfish are the biggest in deeper waters around 150-250ft of water, but you can catch them even near shore as shallow as 60-80ft of water.

However, with their newly increased minimum size limit of fifteen inches to the fork you need almost a seventeen inch over all sized fish to be able to keep it which is a large triggerfish. Typically you're going to get these guys in 120+ foot of water on small strips of squid or chunks of threadfin on your snapper set ups.

Mangrove snapper action has been going very well offshore with some truly large mangroves coming up around 120-180ft of water mixed in with big vermillions and the occasional yellow tail snapper too. Using the lighter tackle is a great option this time of year since gag grouper and red snapper are both closed. Around 30-40lb test and 5-6ot hooks would be my go-to set up for mangroves with double-snelled hooks and a chunk of threadfin for bait.

Amberjack season is right around the corner! Jacks open up for the month of May only for a short period and we're looking forward to going deep around 150-300ft to target these big fish on wrecks, springs and huge ledges or peaks once May rolls in.
Big baits in the 1-3lb range and massive reels with 40-50lbs of drag or more and 100-120lb test and 10-12 ot hooks are the set ups I would look towards to land me a massive 70-100lb amberjack during this short season.

They will also be open August, September, and October too but they bite best in cooler months so early May is going to be the best time to target the jacks.

Red grouper fishing around 100-140ft of water has been great this time of year on the backside of their spawn they are fat and hungry. However, now they are starting to thin up and move around a bit more. The biggest fish are around 120-180ft on the big potholes and smaller ledges and flat hard bottom with the bait shows.

Pelagic action  tuna, kingfish and the occasional sailfish still going well offshore too. Never forget the flat-line like mentioned in the near shore section while offshore fishing this time of year.

For more information from Hubbard’s Marina, head over to their website.