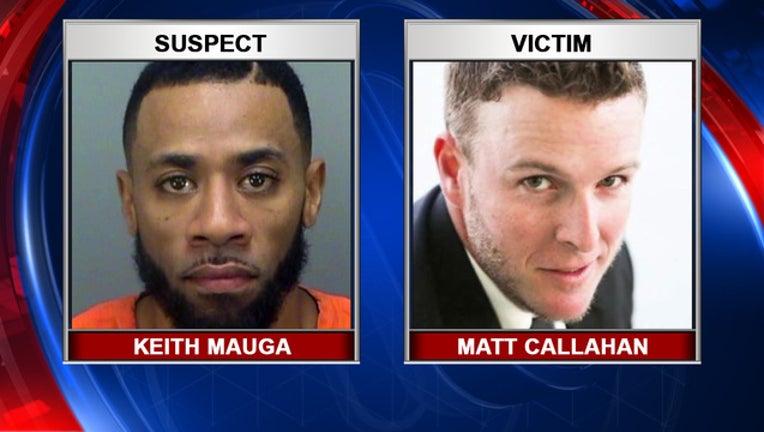 TAMPA (FOX 13) - The father of Tampa mural artist Matt Callahan, who died earlier this year from a head injury, is speaking out about an update in the investigation of his son’s death.

“I was convinced all along of Mr. Mauga’s guilt, and what he did,” Mike Callahan said.

Keith Mauga hasn't been convicted, but Tampa police say they are planning to charge the 34-year-old man in the death of Tampa muralist Matt Callahan. Police found the 40-year-old in a median on Gandy Boulevard in the early hours of April 3.

Callahan says witnesses claim Matt and Mauga had argued the night of his death over a pool game.

“The police did a very thorough investigation, interviewed a lot of witnesses, and there's a lot of videotape of what happened,” Callahan said. “And ultimately it turned out there were a lot of witnesses who were eyewitnesses to the event.”

Steve Hegarty with Tampa police confirmed the update in the case.

"Mr. Mauga's actions resulted in Mr. Callahan's death, so we have a warrant for Mr. Mauga’s arrest,” Hegarty said.

Serving the warrant requires a trip to prison, because Mauga is already locked up -- at Moore Haven in Glades County.

“It turns out he’s already in prison, for another incident, where he punched someone and they were seriously injured,” Hegarty continued.

That incident was an attack on Joshua Maville in July of 2017.

“Mauga sucker-punched him as the result of a perceived slight, and Mr. Maville was in a coma as a result but recovered.”

The outcome wasn't the same for Matt Callahan, the well-known muralist, husband and father.

“My son was married to his wife of nine years, they have a 5-year-old, a grandson of mine, and you know, Mr. Mauga took away the father of their child, and took away her spouse,” Callahan said. “And took away a pretty renowned artist in the community and around the country."