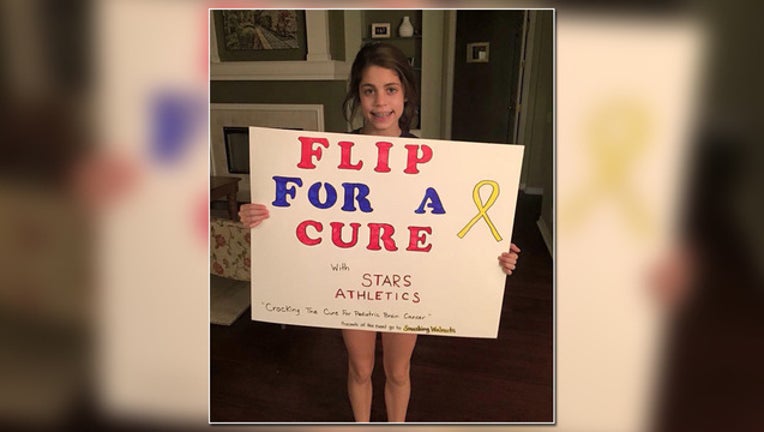 (Courtesy: Flip for a Cure for Smashing Walnuts on Facebook.)

TAMPA (FOX 13) - “#FlipForACure”. It’s a social media challenge launched by a young Bay area cheerleader to bring attention to pediatric brain cancer and raise funds for the cause.

Sydney Gad, 12, says she set out on this mission after she watched a peer, 10-year-old Gabriella Miller, lose her battle with brain cancer.

“A girl in my brother's 4th grade class was diagnosed with brain cancer recently. I want to live in a world where brain cancer can be cured. I want to be the one who raises enough money so doctors can do more research,” she wrote in a caption on social media.

The caption appears alongside a video that tells Gabriella’s whole story. It explains how Gabriella fought her hardest to beat her disease, but sadly passed away in October of 2013.

Now, Sydney is challenging people to help change the outcome for children with cancer in the future by "flipping" to find a cure.

The competitive tumbler already hosted a #FlipForACure event at the Florida State Fairgrounds last Sunday- where she did 165 flips and raised $6,000 for childhood brain cancer research- but her efforts don’t stop there.

Online, she’s challenging others to record themselves doing a flip, cartwheel, or roll of their own. Then she’s urging them to make a donation to Gabriella’s cause- the Smashing Walnuts Organization – and then challenge someone else to keep it going.

Scroll down for videos!

Sydney already reached Miguel and Holly from Hot 101.5’s ‘The Miguel Show’, who accepted her challenge, recorded themselves cartwheeling, and passed it on to FOX 13’s own Taylor Katz.

The ball is now rolling. Can you #keep it going and #FlipForACure?

Click here for more information on Flip for a Cure, and here for a direct link to Sydney's online fundraiser.

See some #FlipForACure examples below: