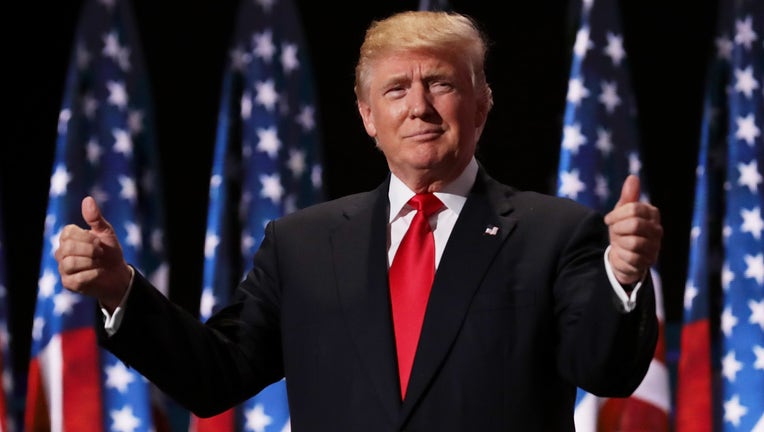 Donald Trump gives two thumbs up to the crowd during the evening session on the fourth day of the Republican National Convention on July 21, 2016 at the Quicken Loans Arena in Cleveland, Ohio. Republican presidential candidate Donald Trump received t

WASHINGTON - Several states are vying to host President Donald Trump when he accepts his party’s nomination later this year, after Trump officially pulled the plug on North Carolina because of the state's concerns over the coronavirus.

Nashville, Tennessee, and several cities in Florida are among those said to be in the running. Also being considered are venues in Nevada, Georgia, Texas, Louisiana and Arizona.

Trump announced Tuesday night that he would no longer be holding this summer's Republican National Convention in Charlotte because the state refused to give in to his demands and guarantee that the event be held without public health restrictions due to the pandemic.

Under existing contractual obligations, some of the convention's official business will likely still have to take place in the city, according to a Republican National Committee official who was not authorized to discuss the matter publicly and spoke on condition of anonymity. But Trump has made clear that he will not be accepting the nomination in Charlotte and will be holding his made-for-TV event somewhere else.

“Due to the directive from the governor that our convention cannot go on as planned as required by our rules, the celebration of the president’s acceptance of the Republican nomination will be held in another city," RNC national press secretary Mandi Merritt said in a statement Wednesday, adding that: "Should the governor allow more than 10 people in a room, we still hope to conduct the official business of the convention in Charlotte.”

Tennessee Gov. Bill Lee, a Republican, has called his capital “the best place in America to have a convention" and said GOP officials will be coming to scout Nashville on Thursday.

One Republican official said city officials had been holding off from aggressively pursuing the convention site until they had “guarantees” that North Carolina had officially been given the boot. They noted that Nashville had put in a bid to host the convention two years ago, but that concert and NHL playoff conflicts — now no longer issues — had made it a bad fit at the time.

Meanwhile, Florida's Republican Party said its state is ready to roll out the red carpet for the delegates who will formally nominate Trump.

During a news conference in Orlando, Gov. Ron DeSantis, a Republican, said he has spoken with RNC officials about holding the convention in Florida and volunteered several cities, including Orlando, Jacksonville and Miami.

“We would like to have it,” DeSantis said, adding that the event could be held with mitigation measures like face masks and testing, depending on how prevalent the virus is at the time.

“So this is almost three months out, I think we’re probably going to be able to pull it off,” he said. He also criticized North Carolina's governor turning down $100 million in business.

The chair of Florida’s Republican Party, Joe Gruters, said Florida would be a natural fit for a convention because of the ready availability of hotel rooms and facilities, as well as having a governor who is a strong ally of the president. “We are in the president’s home state,” he said.

Related: DeSantis says conventions for both political parties would be welcome in Florida

“We have the wherewithal to put things together in short order," Gruters said. “We’re actively doing what we need to do to make sure Florida is on the top of their list."

In addition to Nashville, Orlando and Jacksonville, RNC officials confirmed that venues in Georgia and the cities of Las Vegas, Dallas, New Orleans and Phoenix are also under consideration, and that party officials will likely visit several possible sites in the coming days.

Georgia Gov. Brian P. Kemp, a Republican, tweeted Tuesday night in response to Trump's announcement, “Hope you have Georgia on your mind, @realDonaldTrump!”

Other states, meanwhile, appeared already to be out of the running. West Virginia Gov. Jim Justice, another Republican who had expressed interest in hosting the event, said that Trump had called him personally on Wednesday to tell him it was unlikely to happen his state.

“I knew it was a giant long shot and everything, but I wanted West Virginia to be on the radar,” said Justice, an ally of the president who has sought to play up his connection with Trump as he seeks reelection.