Florida's struggling citrus industry continues to see a decline in the crop for the current growing season, with the harvest on track for the lowest yield since before World War II.

TAMPA, Fla. - Florida's struggling citrus industry is approaching the end of its growing season with the lowest production since 1940.

The U.S. Department of Agriculture's latest report estimates Florida growers will fill 44 million boxes of oranges, grapefruit, and specialty crops this season – that's down more than 22% from the previous season. 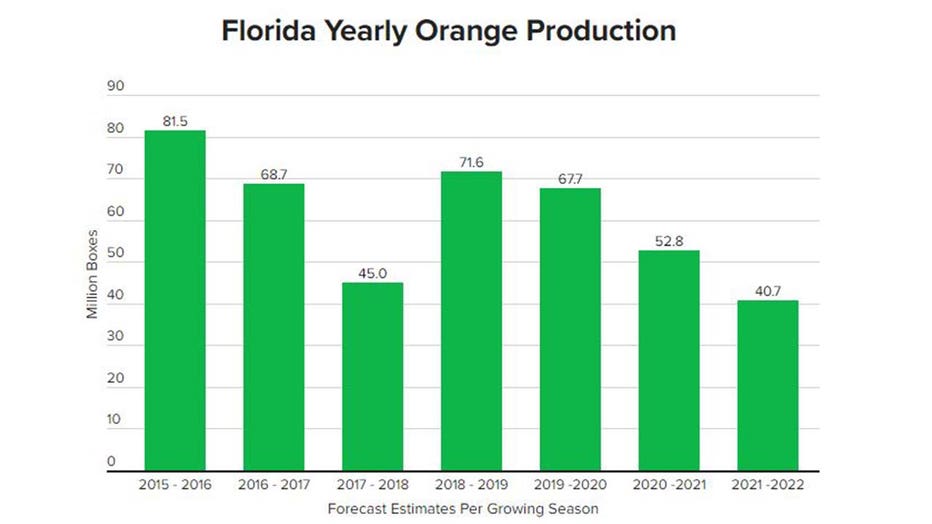 Oranges make up the vast majority of the estimate – 40 million boxes – while grapefruit production is estimated at three million. Specialty crops are at 750,000. The industry has been on a downward trend from two decades because of issues such as residential and commercial development, foreign imports, and citrus greening.

"Even though production is down from the prior season, this forecast is an encouraging sign for Florida citrus growers as we mark two consecutive months where the orange production forecast has increased slightly. Our producers have faced many challenges over the past decade, including the continued impact of citrus greening and severe weather events," Florida Agriculture Commissioner Nikki Fried said in a statement.

While impactful weather events have to been limited to a handful of freezes and Hurricane Irma of 2017, experts say citrus greening has shown no signs of slowing down.

According to the University of Florida, an Asian bug discovered in the states back in 1998 is now thriving and spreading a harmful disease amongst citrus crops.

Industry experts say once a plant becomes infected, its nutrient flow will slow and eventually impair its ability to produce fruit.

There is no cure for citrus greening, meaning that a tree with the disease will deteriorate until it dies.

A Florida woman's collection of citrus labels traces the industry through the years.

READ: Citrus labels tell the tale of Florida's past

The 2020-2021 season ended with 52.8 million industry-standard 90-pound boxes filled with oranges. Another 4.1 million boxes contained grapefruit and 890,000 boxes were filled by specialty crops, which are mostly tangerines and tangelos.

Two decades ago, the industry produced 230 million boxes of oranges and had all citrus production at 287.2 million boxes

FOX Weather contributed to this report