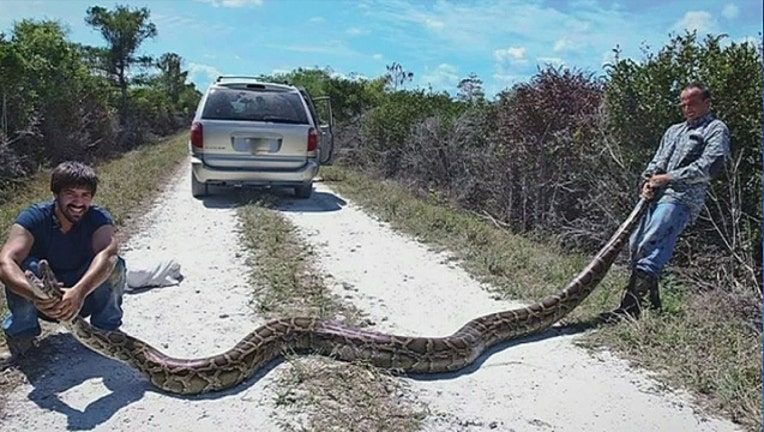 Florida doubled its ranks of python hunters last week as the state steps up efforts to tame the invasive species that has long devastated the balance of the natural food chain in the Everglades.

The hunters are part of the state’s Python Elimination Program that has so far removed more than 2,500 Burmese pythons since it began in March 2017, the South Florida Water Management District (SWMD) announced Thursday.

More than 1,000 aspiring hunters hoping to get the chance to remove the invasive serpent from the Everglades applied to the 25 new openings, according to the South Florida Sun-Sentinel. The district was looking for people with experience and familiarity with the Everglades for an hourly rate of $8.65.

The hunters are also awarded bounties based on the length of the pythons, the SWMD says on its website. An extra $50 is given for each python measuring up to 4 feet, plus $25 for each additional foot. Hunters can further collect a $200 bonus for each python found guarding a nest of eggs.

Native to Southeast Asia, the Burmese python is one of the largest snakes in the world and is considered an invasive species. It began appearing in the Everglades more than 20 years ago when the reptiles were imported as pets, the U.S. Department of Agriculture states on its website.

The apex predator's insatiable appetite has resulted in the severe decline in mammal populations in the Everglades, including endangered species. The snakes feed on animals like birds and rabbits, and take away those food sources from native wildlife like panthers, bobcats and alligators, the SWMD said.

Statistics kept by the SWMD show that the vast majority of pythons removed have been under 4 feet in length, totaling 787. Other eliminated snakes include over 500 between 7 and 8 feet, and 37 serpents between 14 and 17 feet. Only three pythons have been recorded over 17 feet.

A similar program the Florida Fish and Wildlife Conservation Commission operates has removed 839 snakes, bringing the state’s total to over 3,000 eliminated pythons to date, SWMD said.

The SWMD board also voted Thursday to triple the program's funding to $750,000, the Sun-Sentinel reported.

"This is for all of us who love the Everglades. We're putting our money where our mouth is and taking the fight to these invasive pythons, now in a bigger way and across much more habitat," said SFWMD Governing Board Chairman Chauncey Goss.

"Gov. [Ron] DeSantis loves the Everglades and directed us to leave no stone unturned to eradicate this predator that threatens native Everglades species,” he said. “That is exactly what we are going to do with our partners at FWC and Everglades National Park."

Gov. DeSantis last month announced a significant increase in resources to remove the invasive snakes along with plans to make the python hunt a yearly event rather than every three years.