A Palm Beach County drawbridge operator is facing manslaughter charges in the death of a woman who fell from the bridge more than a month ago.

WEST PALM BEACH, Fla. - A Florida bridge tender has been arrested for manslaughter, one month after a 79-year-old woman fell to her death from a drawbridge that began rising while she was still walking on it.

West Palm Beach Police said they arrested 43-year-old Artissua Lafay Paulk at her home Thursday afternoon with the assistance of US Marshals, after obtaining an arrest warrant two days earlier, which said surveillance video and deleted text messages between Paulk and her supervisor showed she lied in her statement to police.

Paulk's arrest stems from the Feb. 6 incident, where 79-year-old grandmother Carol Wright fell to her death from the Royal Park Bridge.

Wright was not identified by authorities due to Marsy's Law, but her identity was released by Attorney Lance Ivey, who represents Wright's family, WPTV reports.

According to Ivey, Wright had taken her bicycle for a ride to a book shop in Palm Beach and was returning home when she began crossing the bridge.

"She legally and lawfully gets on the bridge. And without any expectation, unbeknownst to her, the bridge tender pushes the button that would ultimately turn out to be a slow, mental, and physical death sentence for Carol," Ivey said.

Previous coverage: Woman falls to her death from Florida bridge

Police said she was within 10 feet of the barrier arms that halt traffic when the drawbridge began to open.

"The woman tried to hang on. There was a bystander nearby who tried to help her, but tragically she fell five or six stories below where she died landing on concrete," West Palm Beach police spokesman Mike Jachles said.

RELATED: Police identify victim who fell to her death from Florida drawbridge as 79-year-old woman

Police said a man on a skateboard desperately tried to rescue Wright and help her hang onto the bridge.

"Despite those efforts, the woman was not able to hold on and she fell to the concrete landing below to her death," Jachles said. "From where the victim was to where she landed was approximately five to six stories or 50 to 60 feet." 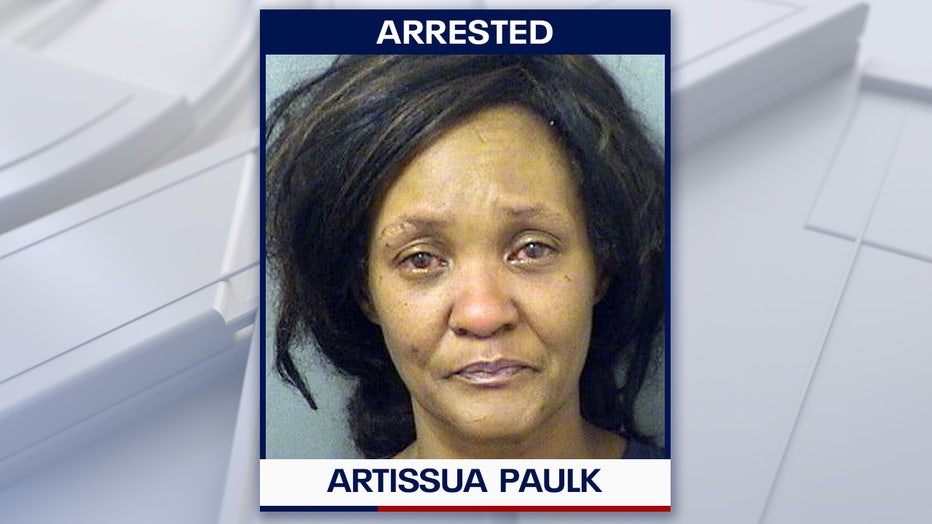 According to WPTV, West Palm Beach Fire Rescue's Technical Rescue Team had to use ropes and harnesses to lower firefighters beneath the bridge's surface to reach Wright, who landed on a concrete surface where the mechanical components of the drawbridge are located.

Police had described the bridge tender as "distraught," the Palm Beach Post reported.

PREVIOUS: Woman falls to her death from rising Florida drawbridge

A search of the phone showed Paulk was not using the device at the time of the incident, investigators said.

However, the arrest affidavit in Palm Beach County court records showed Paulk texted with her supervisor about lying to police, then deleted the texts.

3:20 p.m. from supervisor to Paulk: "When they talk to you make [expletive] sure you tell them you walked outside on balcony 3 diff times to make sure no one was past gates n delete this msg after one time to make sure card [sic] stop 2nd time after gates lowered and 3rd time before you raised spans ok now delete this I know ur upset but u gotta tell them step by step how u do opening" – this message was deleted

3:59 p.m. from supervisor to Paulk: "You have to write out step by step what you did ok up till time you were told someone fell" – this message was deleted

Police said video evidence contradicted her statement that she walked out onto the balcony and visually checked the bridge for vehicles or pedestrians prior to opening the bridge, saying her actions showed "reckless disregard of human life."

Paulk was charged with manslaughter by culpable negligence.