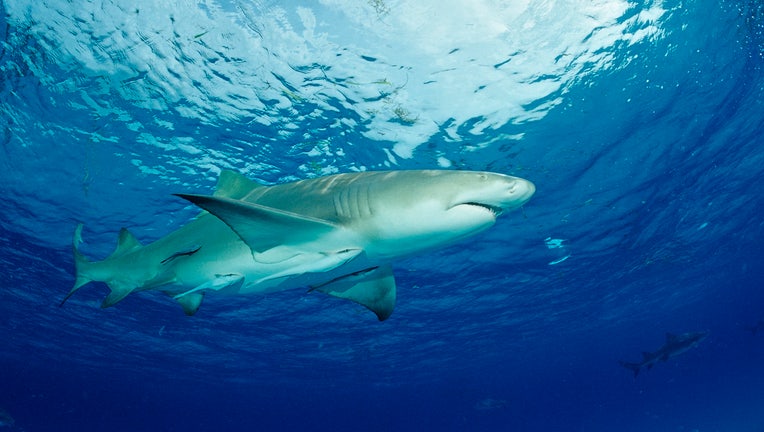 FILE: A lemon Shark in the Atlantic Ocean. (Photo by Reinhard Dirscherl/ullstein bild via Getty Images)

KEY WEST, Fla. - Apparently, everything wants to take a bite out of this guy.

An experienced fisherman was on a trip with his family when he was bitten by a shark. According to the angler, this isn’t the first time he’s felt a predator’s teeth on his skin.

Justin Stuller was on a  trip with his family for some swimming, fishing and lobstering in the Florida Keys when the incident occurred, Yahoo News reports. The bite reportedly resulted in Stuller receiving two dozen stitches and left him walking with a small limp.

While this was his first shark bite, he was previously bitten by an alligator (apparently hard enough to leave scars on his leg).

According to Yahoo News, Stuller had noticed an injured fish while out on his boat and decided to dive down to retrieve it. He says he moved the fish to a safer area, but as he surfacing, an eight-foot lemon shark appeared.

"I felt the skin more than the shark,” he told Yahoo News. “It rolled me over and I saw it swimming away.”

Stuller says that his first thought was to get his kids, who were swimming nearby, out of the water.

Fortunately, the experienced fisherman says he keeps a complete medical and first-aid kit on the boat. Once his wife and friends pulled him out of the water, however, they reportedly decided that the wound was bad enough that he needed to get to a hospital.

Stuller said, “I tied it off and actually lost very little blood. It was pretty deep, but no bone. I was very lucky, no tendons.”

The experience apparently didn’t scare Stuller away from the water, however. Yahoo News reports that after getting stitched up, he and his family went back out on the boat the next day. This time, however, Stuller didn’t do any diving.