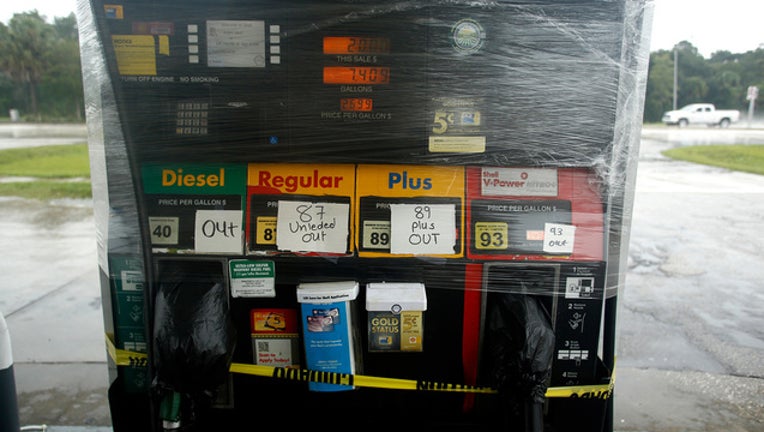 The few motorists remaining on the roads pass empty fuel pumps at a closed gas station ahead of Hurricane Irma on September 10, 2017 in Tampa. (Photo by Brian Blanco/Getty Images)

TALLAHASSEE (NSF) - Florida could be moving closer to stockpiling fuel for future hurricanes or other disasters.

Sen. Gary Farmer, D-Fort Lauderdale, filed a proposal (SB 700) Tuesday that would establish a task force within the state Division of Emergency Management to come up with recommendations for a strategic fuel reserve.

The proposal, filed for the 2018 legislative session, doesn't outline costs or how much fuel could be stored for a rainy day, but it would require the recommendations to be completed by April 30, 2019.

“It is our obligation to ensure the safe and timely evacuation of our citizens and guests who are in harm's way leading up to a natural disaster,” Farmer said in a statement. “In the days prior to Hurricane Irma, it became readily apparent that our fuel supplies could simply not keep up with the demand for gasoline. This created a situation where many Floridians were unable to travel to safety, or to properly prepare for the storm.”

The measure was filed as the House Select Committee on Hurricane Response and Preparedness has included among its charges the exploration of a centralized state gasoline reserve.

“Gas wasn't readily accessible,” House Speaker Richard Corcoran, R-Land O' Lakes, said Sept. 19, when creating the committee. “Having a committee that looks at why does a state, in the richest country in the world, the third largest (state), why don't we have a significant gas reserve in the central part of the state so that's not an issue moving forward for our citizens?”

Select Committee Chairwoman Jeanette Nunez, R-Miami, said last week she expects bills to come out in mid-December that could include fuel depots or distribution points.

“I think the onus is on the state to prepare for the worst-case scenarios,” Nunez said Thursday.

Florida strained to keep up with fuel demand as Hurricane Irma neared the state in early September.

As 6.5 million people were ordered to evacuate their homes, others scrambled for last-minute hurricane supplies. Motorists reported spending up to 12 hours on routes that typically are covered in six or seven hours.

The situation grew worse as ports, where fuel is delivered to the state, were closed due to storm winds.

Rushing fuel to South Florida before the storm, the Florida Highway Patrol served as escorts for tanker trucks.

A month later, when Hurricane Nate threatened the Gulf Coast, Gov. Rick Scott acknowledged that Florida was better prepared for Nate than Irma because there weren't concerns about fuel shortages.

“With regard to Irma it was right after (Hurricane) Harvey, the refineries were shut down, so going into Irma we were low on fuel,” Scott said on Oct. 6. “We were worried that we wouldn't have enough fuel to make sure everybody could evacuate.”

On Thursday, Scott directed the Florida Department of Transportation to work with other state agencies, Florida ports, law enforcement and fuel retailers to determine how to increase fuel capacity during emergencies.

Scott gave the transportation agency until January to complete its findings.

“Increasing the availability of fuel for evacuations at Florida gas stations is a top priority,” Scott said in a prepared statement.