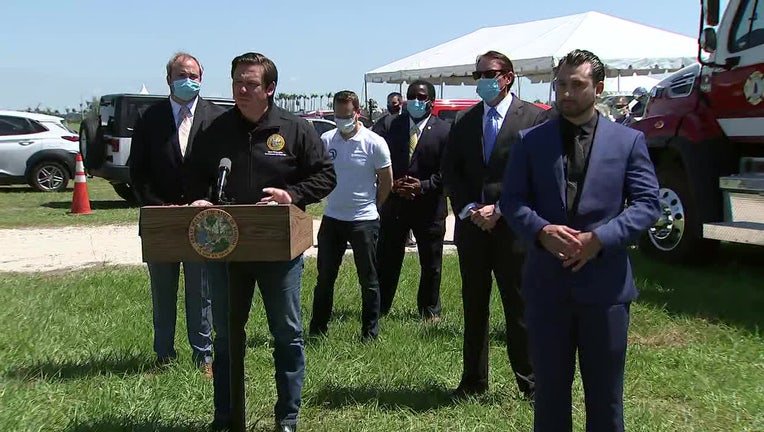 Gov. DeSantis speaks about COVID-19 at a Sarasota testing site.

TALLAHASSEE, Fla. - As Florida slowly reopens, officials are now contemplating what they should do if the coronavirus outbreak lingers into hurricane season.

Republican Gov. Ron DeSantis said Tuesday that the virus will be around in some form during hurricane season, and the state needs to rethink how to provide shelter for evacuees without spreading the disease.

Hurricane season begins June 1 and usually peaks from late August through September. Florida is often a target for storms, forcing thousands of people to evacuate with many fleeing to shelters.

“This virus really thrives and transmits when you have close sustained contact with people inside an enclosed environment,” DeSantis said. “As you're looking at sheltering for a hurricane, you have to keep that in mind. If you pile people into a place, under normal circumstances that may be fine, but that would potentially allow the virus to really spread if somebody is in fact infected.”

Florida emergency management Director Jared Moskowitz is working with the Federal Emergency Management Agency on potential changes to how the state handles evacuations and sheltering.

Moskowitz said that might include shelters that only accept people infected with the virus, or orders for people to shelter in place depending on the strength of the building and the power of the storm.

Moskowitz also said the state will stockpile personal protective equipment in preparation for the storm season, including 10 million masks.

Among other topics DeSantis focused on were:

— The state will announce Wednesday details of a mobile testing facility that will do rapid testing at long-term care facilities. It will be a recreational vehicle equipped with a lab.

— The state is getting ready to begin serological testing to see if people have antibodies that indicate they were infected, recovered and didn't know they had the disease. Florida has 200,000 test kits that will be sent to hospitals and be available at driveup testing sites. “Antibody testing is finally here. We’re going to get many more coming down the line, but those 200,000 I think will be a really good start.”

— DeSantis said one of the biggest problems the state faced when trying to obtain masks, gloves and other personal protective equipment is that much of it was manufactured in China and was slow to arrive in the United States. “All this stuff should be made in the United States and not in China. We don’t want our health destiny resting in the hands of a communist dictatorship.”

— DeSantis allowed restaurants to deliver alcoholic beverages during the stay at home order. He said he'd like that to become permanent. “I think that's been pretty popular. We're probably going to keep that going. Maybe we'll have the Legislature change the law on that.”