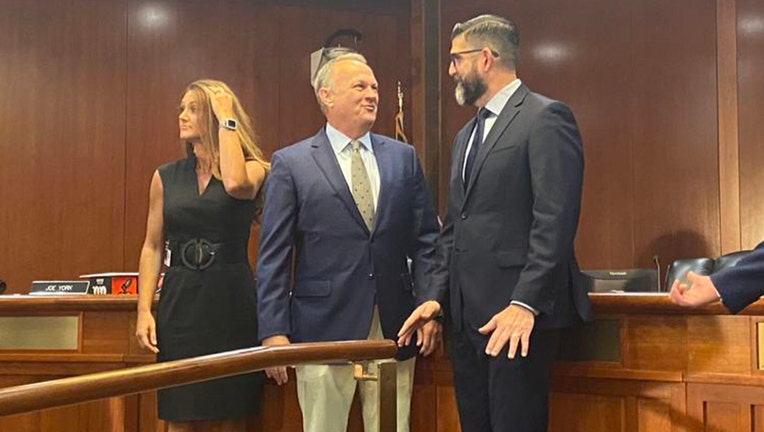 Courtesy of the News Service of Florida

TALLAHASSEE, Fla. - Following through on a recommendation from Gov. Ron DeSantis, the State Board of Education on Friday appointed Sen. Manny Diaz Jr. as Florida’s next education commissioner.

Diaz, a Hialeah Republican, will replace Commissioner Richard Corcoran, who is stepping down effective Sunday.

Diaz will assume the role June 1 and become the state’s first Hispanic education commissioner. In the meantime, Department of Education Senior Chancellor Jacob Oliva will serve as interim leader of the agency.

"This is not about me. This is about the students in our state, the parents in our state and our governor’s thrust to keep education in the forefront," Diaz told reporters after receiving the appointment.

DeSantis, who picks members of the state board, recommended Diaz’s appointment last week.

That backing came after Diaz carried out two of the governor’s legislative priorities during this year’s legislative session. Diaz sponsored a bill aimed at phasing out the state’s current standardized-testing system and replacing it with a "progress monitoring" system (SB 1048), and a bill (HB 7) that will restrict the way race-related issues are taught in public schools and in workplace training.

DeSantis has signed both bills.

"Manny Diaz has done a great job in the Legislature on education issues ranging from teacher pay to parental rights and choice," the governor said last week in announcing the recommendation.

Elected to the Senate in 2018 after serving in the House for six years, Diaz is a former classroom teacher who works as an administrator for Doral College, a private school that is a part of Miami-based charter school company Academica.

As he steps into the job, Diaz will face an ongoing teacher shortage in the state and the task of implementing the new testing system to replace the current Florida Standards Assessments.

"I think the first thing that comes to mind, obviously, is we have progress monitoring. And there’s going to be a transition to testing. And having that happen right away, that’s going to be a big part of the agenda. But I’ve said it already publicly, the teacher shortage is an issue that we’re going to have to confront," Diaz told reporters.

Diaz also will start the job shortly before several controversial education laws go into effect in July. Those include the Diaz-sponsored measure on race-related instruction, dubbed by DeSantis as the "Stop Wrongs Against our Kids and Employees Act," or Stop WOKE Act, and a measure that will bar classroom instruction about sexual orientation and gender identity in early grades. Both of those measures have been challenged in federal court.

The law about sexual orientation and gender identity (HB 1557) was formally named the "Parental Rights in Education" law by supporters but was given the moniker "don’t say gay" by detractors.

Speaking alongside Corcoran, Diaz said they have "different styles," but that he "wouldn’t do anything differently" from Corcoran as the two share the same philosophy on education.

As commissioner, Corcoran has played an instrumental role in carrying out DeSantis’ directives on contentious issues such as a push to bar schools from requiring students to wear masks during the COVID-19 pandemic.

Corcoran, a former Republican speaker of the Florida House, announced in March that he would resign as commissioner to "return to private life" and spend more time with family. Corcoran on Friday described a long-standing relationship with Diaz.

"When I took over as commissioner, on every go-to issue that we’ve had over the last four (legislative) sessions, Manny Diaz has been front and center on every single one of them. So my advice is, be Manny. Go out there and be Manny and keep doing what you’re doing, because he’s accomplished a heck of a lot and he’s made us look really good over the last four years," Corcoran said.

Diaz is a vocal proponent of charter schools and has been the architect of legislation that provided significant expansions of school-voucher programs. His appointment was backed by organizations that promote the expansion of school choice, such as American for Prosperity and the Foundation for Florida’s Future, which was founded by former Gov. Jeb Bush.

Diaz, responding to criticism that he is too closely tied to the charter-school industry, pointed to his legislative support for traditional public schools, including efforts to boost teacher pay.

Diaz supporters packed the Cabinet meeting room in the state Capitol, with the crowd including two state college presidents and the Collier County superintendent of schools. Along with public schools, the Department of Education oversees state colleges.

"He will continue to champion teachers, champion our students as well as champion our colleges. He has the experience not only in the classroom, but legislative and policy experience and the higher-education experience," Miami Dade College President Madeline Pumariega said.

Diaz will remain in the Senate until he begins the education job June 1. He said he will take part in a special legislative session starting May 23 to address the state’s ailing property-insurance system.