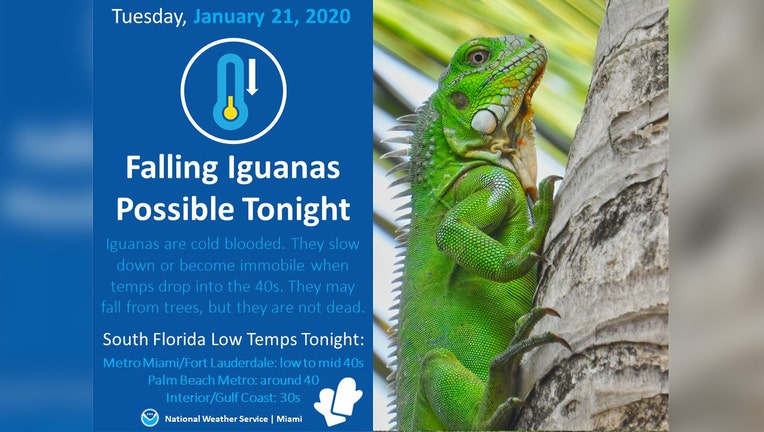 MIAMI, Fla. - The National Weather Service usually sticks to atmospheric weather events, but the agency made a special exception and expanded forecasting criteria to include things falling from above.

The National Weather Service in Miami issued an alert about the possibility for falling iguanas Jan. 21.

"This isn't something we usually forecast, but don't be surprised if you see iguanas falling from the trees tonight as lows drop into the 30s and 40s," NWS Miami wrote on Twitter.

It's not the first time South Floridians have witnessed seemingly-dead iguanas fall from the trees during a cold snap.

Iguanas become stunned in cold conditions and sometimes appear dead. However, as some learned in January 2018 in West Palm Beach, the giant green lizards are just waiting - perfectly still - for the warm weather to return.

According to the Florida Fish and Wildlife Conservation Commission, green iguanas are an invasive species and are not native to the Sunshine State.

They have caused damage to infrastructure, including seawalls and sidewalks, according to agencies in charge of managing the hundreds of miles of canals that channel water throughout South Florida

A prolonged cold spell in 2010 reduced the number of green iguanas in South Florida, but the population has exploded since then.