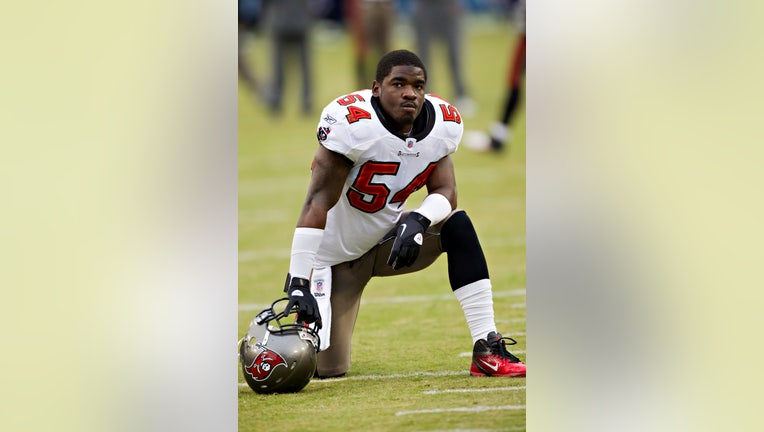 Geno Hayes #54 of the Tampa Bay Buccaneers watches the team warm up before a game against the Tennessee Titans at LP Field on November 27, 2011 in Nashville, Tennessee. (Photo by Wesley Hitt/Getty Images)

His high school coach, Frankie Carroll, told the Tallahassee Democrat that the Hayes family informed him of the player's passing.

"It's one of those things where you have to make sure you tell them you love them," said Carroll, who coached Hayes at Madison County High School in Florida.

Hayes, a former FSU standout, had been in hospice care at his parents’ home in Georgia after battling liver disease for two years, according to reports. Carroll told the paper, in an interview published last week that Hayes was "fighting for his life."

The former linebacker told ESPN last month before he went into hospice care that he was placed on a waiting list for a transplant at the Mayo Clinic and Northwestern Medicine. At the time, Hayes noted that he has been to the hospital more than 20 times in the last year.

"The first diagnosis they gave me was alcoholic cirrhosis," he said. "But when we dug in deeper, it became just chronic liver disease, because I don't drink like that. If I did drink, it was just like wine or something like that. But my body is made different. And that's what [my doctor] said -- 'Everybody's made different.'"

Hayes said he believes that years of taking non-prescription pain medications, coupled with his family history of liver disease, led to his condition. He decided to speak out on his condition -- which he kept private for a long time -- with hopes that he could help others.

"I'm enjoying life, I'm spending more time with my kids and I really want to help people," he said. "My main goal is to just inspire, to inspire the next person, no matter what they're going through, no matter what who talks bad about them -- family, friends, social media, all of that crap -- it don't matter. You take care of you. Make sure you're straight. That's all I want to do."

Hayes and his wife Shevelle have two children, ages 8 and 13.

Hayes was regarded as a four-star recruit by rivals.com coming out of Madison. He committed to FSU in 2005 and tallied 139 tackles during his three years playing for the team. Hayes declared for the NFL Draft after the 2007 season and was picked in the 6th round by the Tampa Bay Buccaneers in 2008.

Hayes played seven seasons in the NFL with the Bucs, Chicago Bears, and Jacksonville Jaguars. He finished his career with 401 total tackles, 10 sacks, and six interceptions.

His last appearance in the league came in Jacksonville's 2014 season finale against the Houston Texans.

"Geno was a beloved teammate and often the first player to volunteer his time to our efforts in the community," the Bucs said in a statement. "He frequently visited schools and had a remarkable ability to connect with children. Losing him at such a young age is heartbreaking."