Teaching kids about significance of 9/11

TAMPA, Fla. - No student currently enrolled at Tampa's Franklin Boys Preparatory Academy was alive to witness the September 11th attacks, but on Friday, hundreds will commemorate the 20-year mark of the day that changed America.

Students will place 2,977 flags on the front lawn of the school. On each flag, there will be the name of a person who lost their life. Each student will choose one name and learn about that person to learn more about that day.

Similar commemorative events are being held in schools all across Tampa Bay. At Nelson Elementary School in Dover, teachers are showing a 15-minute video in every classroom called Ribbons to Remember.

The video pays tribute to the victims, thanking the heroes who responded, and teaching the youngest students about the events of September 11. Students will hear from local first responders as they remember where they were when the towers fell, as well as teachers. 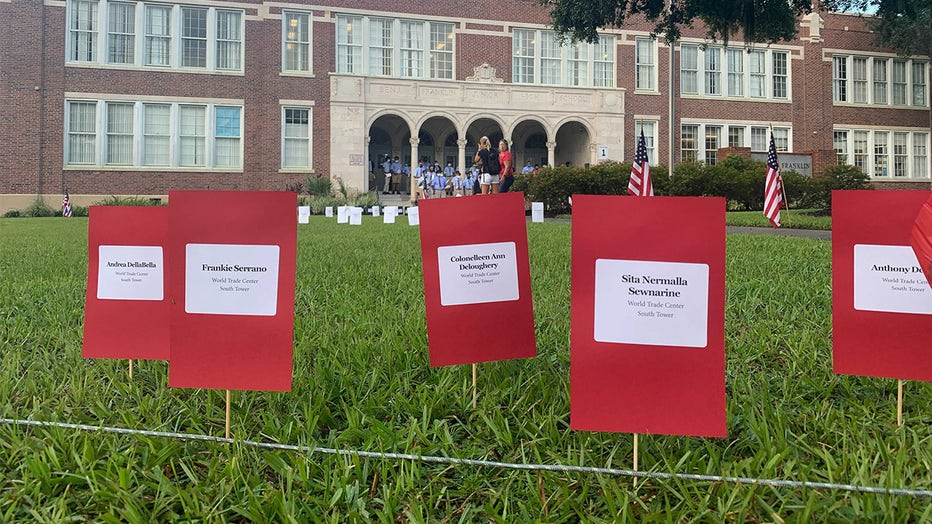 "Throughout the morning, parents came and picked up their students and took them home and the schools closed early that day," an unidentified teacher says in the clip. "All the planes stopped flying overhead. All the soccer practice was canceled and everybody just stayed home and held each other and watched the news."

You can hear the teacher's voice break as she goes back to that day. She can be seen placing a white ribbon on a tree, a symbol to remember the victims aboard the second plane used in the attacks.

At Strawberry Crest Elementary School on Thursday, American Government teacher Lauren Leto read to her students a letter she'd written to herself as a 7th grader at Burnett Middle School in the wake of the attacks.

Teacher pens letter to students not yet born on September 11

She vividly remembers being a middle-schooler on that day, and how her teachers were able to help her and other students make sense of what was happening.