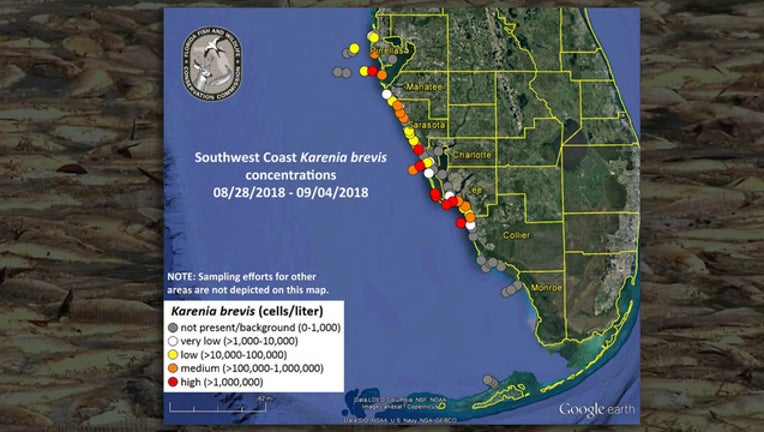 TAMPA (FOX 13) - State officials say the persistent red tide bloom off the coast of Southwest Florida has drifted slightly away from shore, but it’s not clear if this week’s tropical storm had anything to do with that.

Red tide is an algae bloom that is toxic to marine life and can be harmful to humans. The current bloom has lingered along the coast for months, killing everything from fish to manatees to tortoises – and sending beachgoers fleeing in the process.

According to the Florida Fish and Wildlife Conservation Commission’s mid-week red tide update, the overall concentration of the Karenia brevis organism appears to be lower in many places, including Pinellas, Manatee, and Sarasota counties. In particular, the state singled out Sarasota and Collier counties as showing the largest drop.

Tropical Storm Gordon blew across Florida over Labor Day and made landfall along the northern Gulf Coast at near-hurricane strength.   Historically, tropical systems have helped disrupt long-running algae blooms, but it’s too early to tell if Gordon was strong enough to do that.

“Persistent surface currents over the past several days have likely played a role in transporting cells of K. brevis to the northwest,” the FWC report noted.  “At this time, we don't know what the impacts of the tropical storm are/were on the red tide, but we continue to work with partners and staff to better assess this.”

The next full red tide report will be released Friday afternoon.