'Just to be clear, Gabby had four parents,' her father, Joseph Petito, said at the beginning of Sunday's funeral services for his daughter. Joseph and her stepfather, Jim Schmidt, spoke at the start of the service, recalling and describing Gabby, saying she had a positive spirit. After, Joseph and Jim hugged each other.

HOLBROOK, N.Y. - One week after her remains were found in Wyoming, the Petito family, community and loved ones have gathered in in New York to say farewell to Gabby.

Both Joseph Petito, Gabby's father, and her stepfather, Jim Schmidt spoke at the beginning of the memorial service.

"Just to be clear," Joseph said at one point, "Gabby had four parents. They weren’t step-parents. She had four parents who genuinely loved her as if she were their own, and this man is one of them."

The family is using an empty urn during the funeral service today in Blue Point, New York. The service is being held at the Moloney Funeral Home. The FBI has not released Gabby's body to her family, nor have they provided a timeline as to when they might do so.

"If there is a trip you want to take – do it now while you have the time," Joseph said.  "If there is a relationship that might not be the best for you – leave it now." 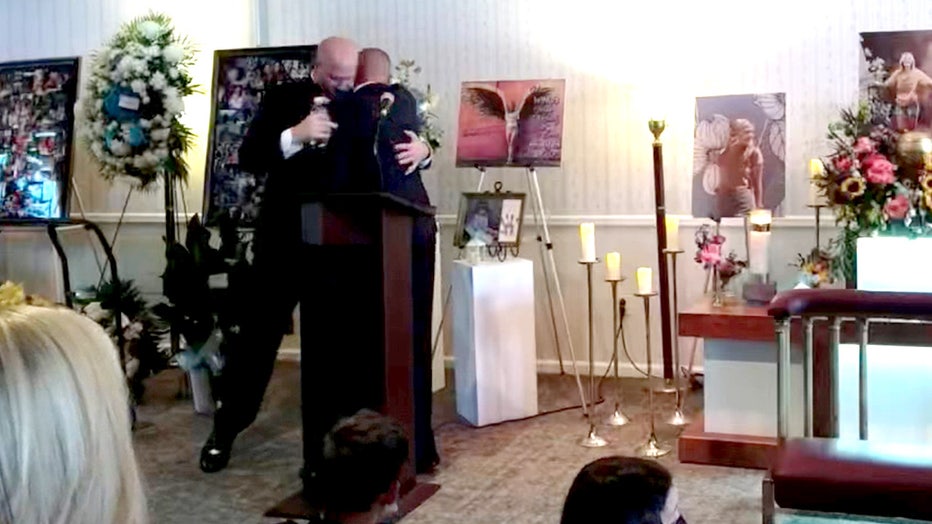 Gabby Petito's father, Joseph, and her stepfather, Jim Schmidt, hugged after speaking during her memorial service.

"I don’t want you guys to be sad," her father, Joseph, said to begin the service. "Gabby didn’t live that way…I’m asking you guys be inspired the way she treated people. She didn’t care she genuinely loved people. I couldn’t be more proud as a father."

Both gave each other a hug after speaking. 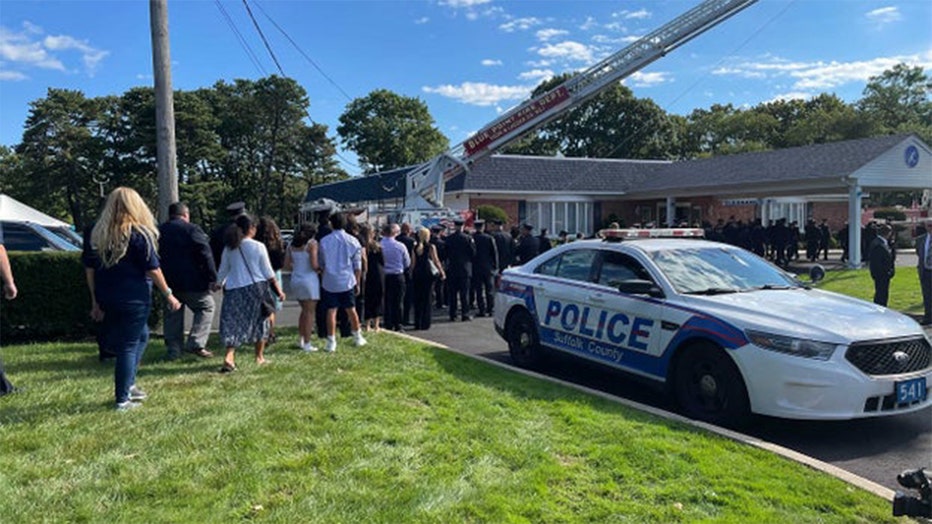 Mourners wait in line to enter the funeral home. (Photo by FOX News)

"I’ve been in denial about it from the start," Corissa Ambrose told FOX News. Ambrose said Petito dated her cousin for about a year between 2013 and 2014.

"Since she first went missing, I did not want to believe that anything bad could have happened to her, and I’m still kind of in denial. It’s hard to take in." 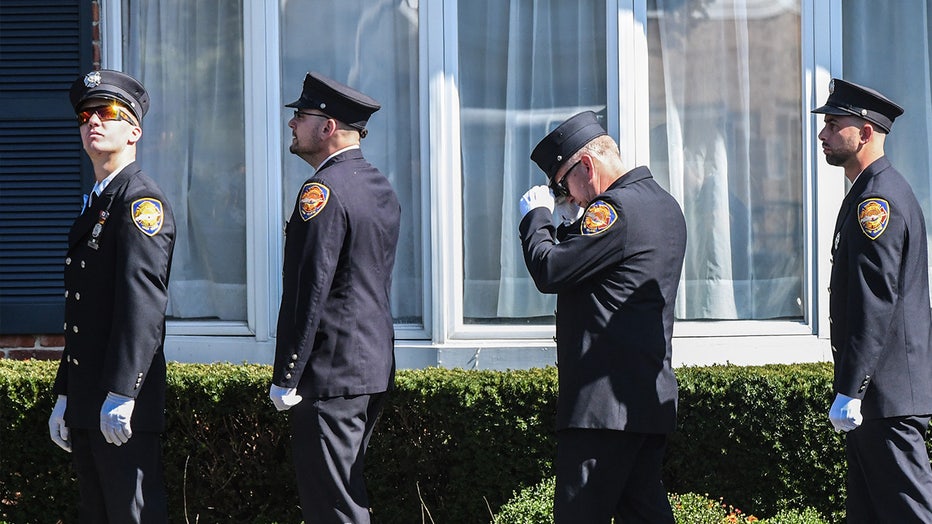 HOLBROOK, NY - SEPTEMBER 26: First responders gather at a funeral home to pay respects to Gabby Petito on September 26, 2021 in Holbrook, New York. As the search continues into a second week in Florida to find Brian Laundrie, who is a person of inter

Ambrose described Petito as the most "free-spirited, kind-hearted soul" who saw the best in everybody.

"You could do no wrong for her," Ambrose said. "No person deserves this, but her – she didn’t deserve this." 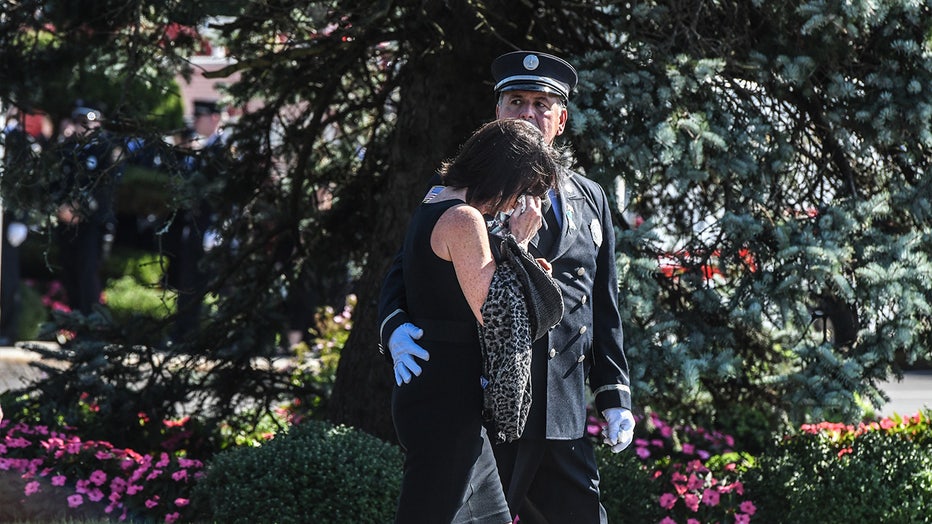 HOLBROOK, NY - SEPTEMBER 26: A person cries outside of a funeral home after paying respects to Gabby Petito on September 26, 2021 in Holbrook, New York. As the search continues into a second week in Florida to find Brian Laundrie, who is a person of

In lieu of flowers, the Petito family is requesting donations for the future Gabby Petito Foundation. Additional information can be found here.

The foundation is aimed at helping families with resources and guidance to help bring missing children home.

Search crews in Florida will return to Carlton Reserve for the eighth day as they search for any signs of Brian Laundrie. The funeral for Gabby Petito is also scheduled to be held Sunday in New York.

The memorial service takes place over two weeks since Gabby was reported missing. One week later, her body was discovered in Wyoming with the medical examiner ruling her death as a homicide.

While she will be laid to rest in New York, hundreds in North Port held their own vigil for Gabby. In fact, the city has held several since she was first reported missing. 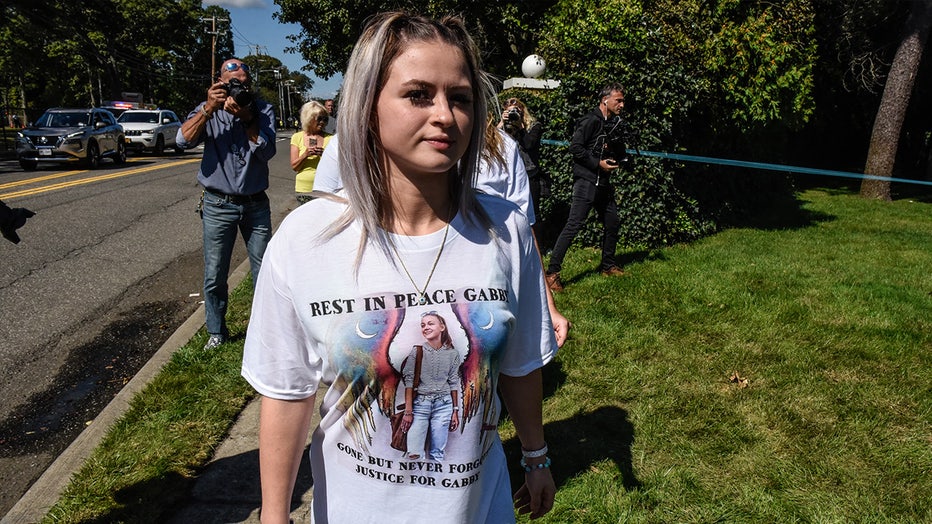 HOLBROOK, NY - SEPTEMBER 26: Mourners wearing t-shirts dedicated to Gabby Petito gather at a funeral home to pay respects to Gabby Petito on September 26, 2021 in Holbrook, New York. As the search continues into a second week in Florida to find Brian

On Saturday night, North Port residents gathered by city hall for the first time since she was found dead. It started with a butterfly release, then a silent prayer, and a candlelight vigil.

Approximately 200 people gathered outside city hall on Saturday evening to honor the life of Gabby Petito.

About 200 people attended, all to honor Gabby's life.

"It’s just very heartbreaking being a mom myself," said Niki Doe, a North Port resident. "I can’t even imagine what her parents are going through, it’s just an experience a parent should never have to go through."

The night before, residents New York's Blue Point community lit up Blue Point Avenue with candles and luminaires at the edges of their driveway in honor of Gabby. 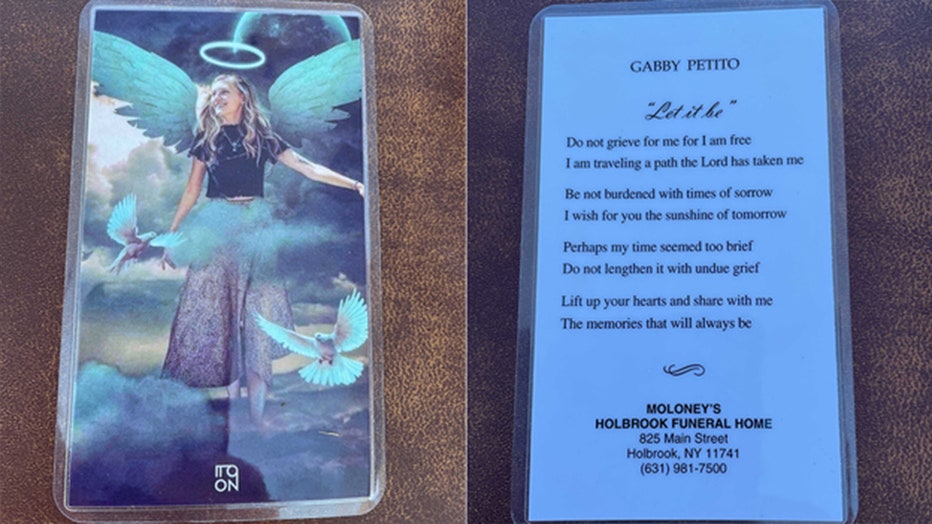 A coroner confirmed that a body found Sunday in Wyoming was indeed Gabby. They said the manner of death was homicide. Investigators believe Brian – Gabby's fiancé – is the last person to see her alive.

Petito's exact cause of death has not yet been revealed, and the final autopsy report remains to be completed.

The remains were discovered one week ago in the Bridger-Teton National Forest after a national search for the 22-year-old. Video captured by a vacationing Tampa family accidentally caught what appeared to be the couple's van parked at the Spread Creek Dispersed Camping Area in the forest; Gabby's body was later found nearby.

Gabby had been documenting the trip across the country on social media. Her last post was made August 25, the same day that she last spoke with her family by phone. The posts abruptly stopped, and Brian returned to his parents' North Port home in the van — alone, according to investigators.

A federal arrest warrant has been issued for him in connection to the case, but the manhunt for Brian has so far proved fruitless.