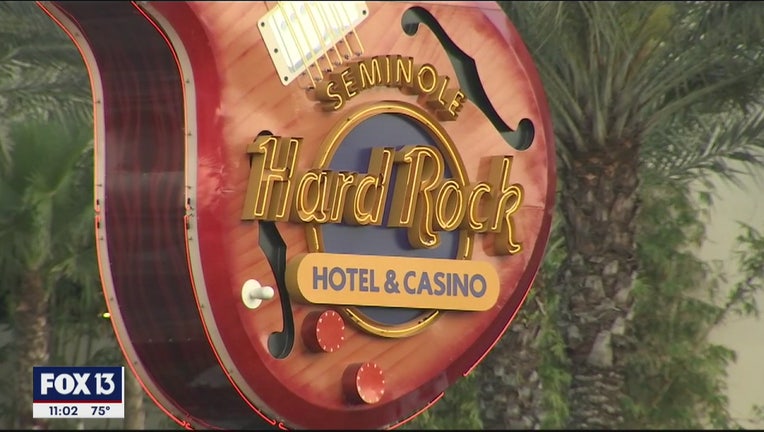 TALLAHASSEE, Fla. - The Seminole Tribe would be able to operate sports betting and add roulette and craps to its casinos and Florida would potentially receive $20 billion over the next 30 years, under legislation signed by the governor Tuesday.

Gov. Ron DeSantis had worked out the gambling compact with the tribe last month, and the Florida House and Senate approved the deal last week. It still needs to be approved by the U.S. Department of the Interior, which oversees tribal gambling operations, and even lawmakers supporting the deal expect legal challenges.

Democrats opposing the bill have argued that the compact violates Amendment 3 passed by voters in 2018. The amendment to the state constitution prevents the expansion of gambling outside of tribal lands without voter approval. Opponents questioned whether the compact will survive a legal challenge.

In 2018, the U.S. Supreme Court struck down a federal law that barred states from authorizing sports betting. Since then, about a dozen states have legalized the activity, with more states poised to enact similar laws.

PREVIOUS: Deal could open doors to new casinos in Florida

Under the agreement, the Seminoles could begin sports betting Oct. 15 and sports wagering at horse tracks, jai alai frontons and former dog tracks for a share of the income. Online sports betting operated by the tribe also would be allowed.

Critics of the compact assert that it violates the state constitution, partly because bets on sports can be made off tribal land. Supporters argued that because the servers that process bets would be located on property owned by the Seminole Tribe, it would be legal.

Florida’s original compact with the Seminoles gave the tribe exclusive rights to slot machines and blackjack. In exchange, the tribe paid the state several billion dollars. Payments stopped in 2019.

DeSantis also signed a bill Tuesday that will create a gaming commission to regulate pari-mutuels and investigate illegal gambling in the state.

Another bill signed by the governor allows jai alai frontons, dog tracks and a harness racing track in Miami-Dade and Broward counties to keep operating slots and card rooms without holding live events. Other pari-mutuels in the state will be able to continue operating card rooms without live events, with the exception of thoroughbred horse tracks, which would have to hold live racing.