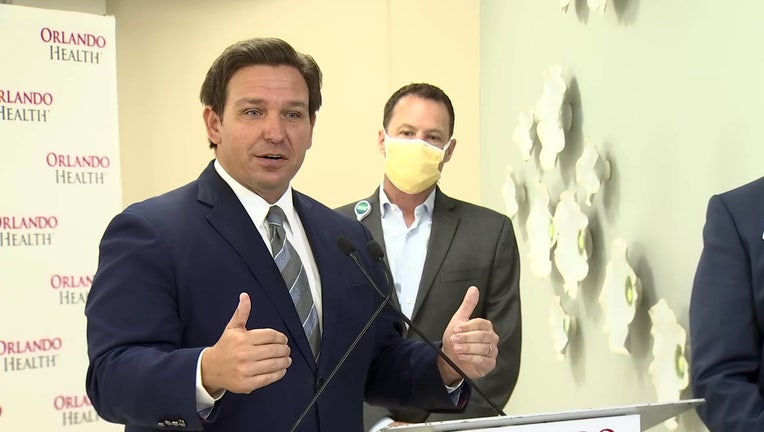 TALLAHASSEE, Fla. - Gov. Ron DeSantis, dealing with a frantic demand for COVID-19 vaccinations across the state, promised Monday that he would strip allotments from hospitals that don’t use them quickly enough and shift the doses to other health-care providers.

Appearing at an Orlando Health hospital in Seminole County, DeSantis outlined several other steps the state plans to take to amplify vaccination efforts, including converting state-run testing sites into vaccination centers, having the state hire 1,000 extra nurses to administer shots and using churches as part of an effort to target underserved communities.

DeSantis also said sites that provide vaccinations should do it seven days a week.

The flurry of moves came after days of long lines, jammed phone systems and overwhelmed websites as Florida seniors who, along with health care workers, were designated as eligible for vaccinations scrambled to get doses from county health departments and hospitals.

A federal Centers for Disease Control and Prevention website showed that 1.13 million vaccine doses had been shipped to the state, and 264,512 had been administered. That’s a rate of 1,232 vaccinations per 100,000 population, according to the website. Florida’s vaccination rate lags behind New York and Texas.

The Florida Department of Health says the number of known cases of COVID-19 in the state rose by 11,256 Monday. According to the state's daily update, the total number of cases in Florida is now 1,376,692

While the state’s distribution efforts have received criticism, DeSantis on Monday defended the approach, noting that the majority of hospitals didn’t receive vaccine shipments from the drugmaker Moderna until just before the holidays.

"What we tried to do in Florida is say, ‘We trust, obviously, our health care delivery system. That’s who's going to do the best at this. And we are going to constantly evaluate,"  DeSantis said. "I think we want to see a healthy competition of where we are getting this out in the community and doing it in a really good way."

DeSantis also contended there has "never been a hitch in the giddy-up."

Yet at the same time, the governor said that if hospitals are unable to quickly dispense their vaccine allotments, the state will decrease future shipments to those hospitals and instead turn the drugs over to hospitals that are distributing them faster.

DeSantis tells hospitals to administer COVID-19 vaccines or lose them

Florida Agriculture Commissioner Nikki Fried, a Democrat who has been a persistent critic of DeSantis during the pandemic, threw a dart at the governor following his announcement.

"Throughout #COVID19, @GovRonDeSantis has blamed Hispanic farmworkers, the media, and young people. Now he’s blaming hospitals for his botched #CovidVaccine rollout. Fix this now — or let the @FLGuard handle it," Fried said on Twitter.

Under DeSantis’ lead, Florida has parted from federal guidelines on how to use the vaccines. On Dec. 23, the governor issued an executive order that made people 65 and older a priority for vaccinations, as opposed to "essential" workers such as teachers, first responders and grocery-store employees.

As COVID-19 vaccines are distributed throughout the state of Florida, individual counties are beginning to release information about how and to whom the two-dose vaccine will be distributed.

Florida has more than 4.4 million people age 65 and older, which drives up the demand for vaccinations. But DeSantis defended the decision to move away from the federal guidelines, which also included vaccinating people 75 and older.

"Florida’s approach, I think, is the better approach. If you have a 73-year-old parent, 73-year-old grandparent, in the vast majority of states in this country, they are simply not eligible to be vaccinated. And we don’t believe that’s right," DeSantis said, adding, "We believe that the seniors have to be put first."

DeSantis said he intends on bringing essential workers into the fold of people eligible for vaccinations after a Johnson & Johnson vaccine candidate receives emergency use authorization from the federal government. Unlike vaccines from Pfizer and Moderna, which require two shots, the Johnson & Johnson vaccine, if approved, would be a one-time shot, which would be easier for employers to deliver, DeSantis said.