Messages appearing on their accounts showed statements about bitcoin and promised to “double” payments sent to a bitcoin wallet address. 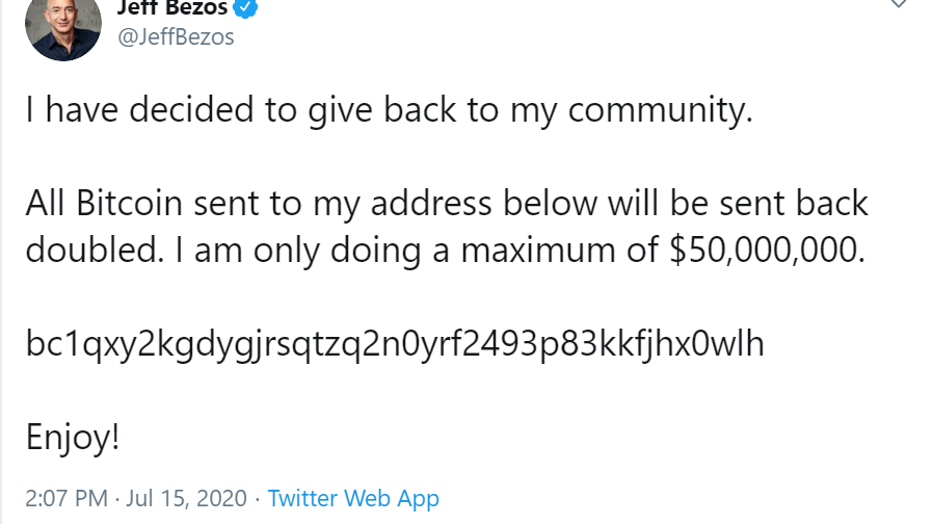 SAN FRANCISCO - The Twitter accounts of several major companies and notable individuals were compromised on Wednesday in an apparent widespread hack involving a bitcoin scam.

Messages appearing on their accounts showed statements about bitcoin and promised to “double” payments sent to a bitcoin wallet address.

One of the posts on Musk’s account appeared at 4:17 p.m. ET reading: “I‘m feeling generous because of Covid-19. I’ll double any BTC payment sent to my BTC address for the next hour. Good luck, and stay safe out there!” 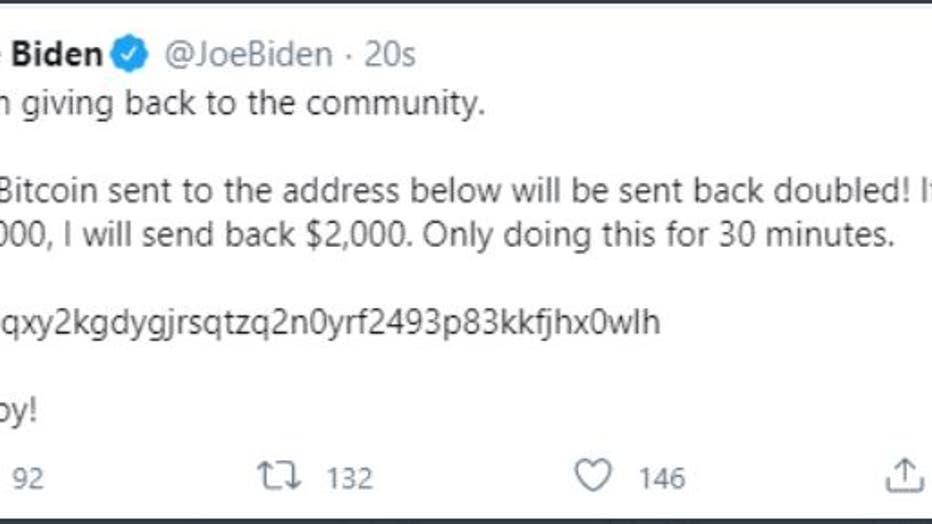 Similar posts on the accounts of Gates, Bezos and others echoed these messages, with an identical BTC address attached.

Bezos, Gates and Musk are among the 10 richest people in the world, with tens of millions of followers on Twitter. The three men are worth a combined $362 billion, according to the latest calculations by Forbes magazine.

Among the political figures targeted, the hack mostly appeared to target Democrats or other figures on the left, drawing comparisons to the 2016 campaign. U.S. intelligence agencies established that Russia engaged in coordinated attempts to interfere in those U.S. elections through social media tampering and various hacks, including targeting the various campaigns and major party organizations.

The Biden campaign said that Twitter's integrity team “locked down the account within a few minutes of the breach and removed the related tweet.”

In a tweet, Twitter noted only that it was aware of a “security incident impacting accounts on Twitter.” The San Francisco company said it is investigating and promised an update shortly. It did not reply immediately to requests for comment.

A spokesperson for Gates told Recode, “We can confirm that this tweet was not sent by Bill Gates. This appears to be part of a larger issue that Twitter is facing. Twitter is aware and working to restore the account.”

Within hours of the tweets appearing, nearly 300 people had fallen for the scam and sent more than $100,000 to the wallet, according to the New York Times.

Twitter told users that they may not be able to tweet or reset their passwords while the incident was being reviewed. One Twitter user noted that verified accounts "are now on lockdown and unable to tweet."

Tom Warren of The Verge later posted saying that verified users were able to tweet again.

This story was reported from Cincinnati. The Associated Press contributed to this report.