Some crimes that appear to fit the government’s definition of a hate crime were not classified as such, while others confirmed as hate crimes by local law enforcement are missing from the federal records.

For example, Rev. Andy Oliver leads Allendale United Methodist -- a gay-friendly church in St. Petersburg. Last year, someone spray-painted 'gay pastor' on it. He reported this as a hate crime.

“If we can start with having an accurate reporting of what hate looks like when action is put to it, then we can know how we can go about trying to dismantle it,” he noted.

Pastor Candace Shultis leads King of Peace Metropolitan Community Church, which someone defaced with a swastika in 2016.

"So we called police. Police came and took a report. We were targeted by someone who knows we are a predominately LGBT community here,” said Rev. Shultis.

Those would both be hate crimes by the federal government’s definition: A “criminal offense against a person or property motivated in whole or in part by an offender’s bias against a race, religion, disability, sexual orientation, ethnicity, gender, or gender identity.”

However, these reports do not show up as hate crimes in our public records requests. These are just two examples of a statewide pattern we discovered that caught state lawmakers by surprise.

Some crimes that appear to fit the government’s definition of a hate crime were not classified as such, while others confirmed as hate crimes by local law enforcement are missing from the federal records. For example, Orlando confirmed five cases from 2015 that do not appear in the official federal reports.

We have a problem in Florida that is acute and different from the other states.

— Professor Brian Levin, the Center for the Study of Hate and Extremism

Professor Brian Levin leads the Center for the Study of Hate and Extremism at the University of California San Bernadino. We asked him to analyze our findings.

"In Florida, the major cities have generally either not reported or underreported,” he said. “We see a lot of zero, zeroes, zeroes. There's no way in a state this large and this diverse that we would have that per-capita number of hate crimes. Any criminologist will tell you so. So we have a problem in Florida that is acute and different from the other states.”

Levin said it's costing Florida because support to fight hate crime is largely based on the stats, and under-reporting could also encourage more extremists.

“They’re not responding to crimes affecting large swaths of their population,” said Levin.

Levin said there are couple of reasons why hate crimes appear to be underreported in Florida.

First, Florida's hate crime law does not protect people based on gender or gender identification. He also said Florida lacks state-driven training and policies other states have to improve reporting.

"The FBI recommends a two-tier level of scrutiny where not only the responding officer but some supervising officer gets to make the call,” Levin explained. “We need a model policy and we need a change in state law.” 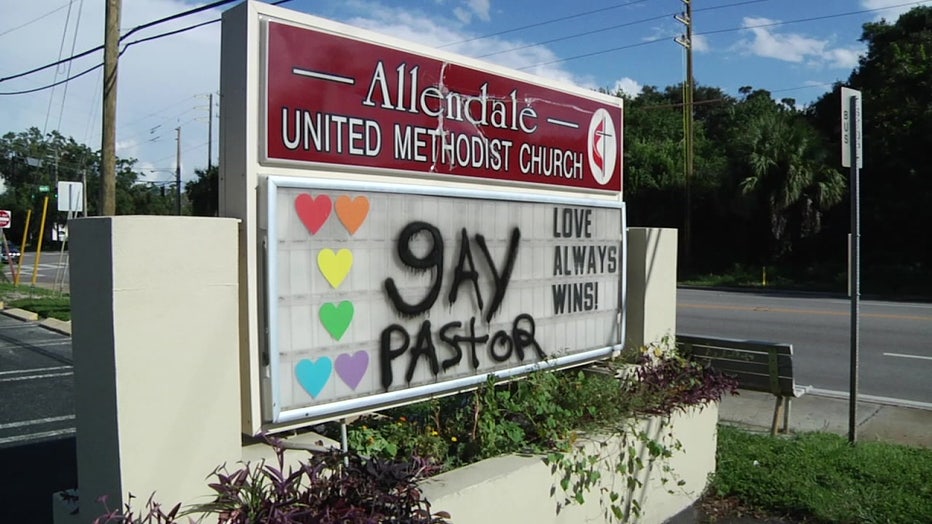 Allendale United Methodist Church responded to once such attack with the phrase "Love always wins."

State representatives Anna Eskamani and Carlos Smith told us they have tried to expand Florida’s hate crime statute and will continue to do so.

This issue personal for Representative Smith, as a victim of hate violence himself years ago.

“I was called homophobic slurs. I was assaulted, beat up, given a black eye, a busted lip, a busted chin. My face mangled,” recalled Smith. It’s a serious problem!”

Meanwhile, Pastor Andy Oliver is concerned about more than his vandalized sign at his church. Shortly after we left our interview with him in August, someone fired a bullet into the church building where staff cares for pre-school children.

Police can't say they were targeted.

"I think the reason they haven't is because the voters haven't made it clear that's something they want,” he said. "People at the top can wash their hands of it and say there is no problem here.”