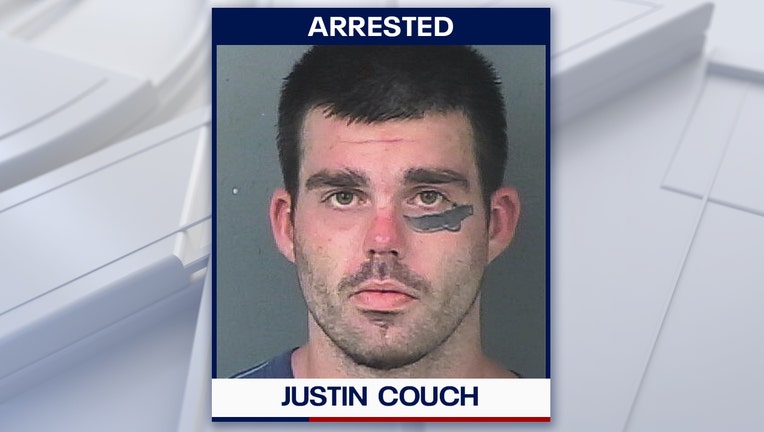 SPRING HILL, Fla. - A Hernando County man with a tattoo of a machete on his face is accused of attacking someone -- with a machete.

According to the Hernando County Sheriff's Office, the incident happened around 10 p.m. Saturday at a home on Tarrytown Drive.

The adult male victim told deputies that 25-year-old Justin Couch kicked him out of the house, where he had been living, after producing a machete and arguing with the victim "for no reason."

When the man asked if he could grab his wallet and cell phone before leaving, he told deputies Couch replied, "There's nothing here for you, leave."

The victim insisted on trying to get his belongings from the home; that's when he said Couch began hitting him in the arm and leg with what he believed was the flat side of the machete's blade.

"Couch then swung the machete at the victim's face," deputies said, noting the victim tried to block the strike by putting his left arm in front of his face.

The sheriff's office said the blade of the machete struck the victim's forearm, causing him to pass out after feeling "severe pain."

Couch took the victim to a friend's house, who took the man to the hospital.

"The victim is currently unable to use or move his left hand due to the severity of the injury he sustained," investigators said.

After speaking with a person who witnessed the attack and with the friend who took the victim to the hospital, deputies arrested Couch for aggravated battery.

Couch is being held on $20,000 bond. If he posts bond, he is ordered to not have any contact with the victim.