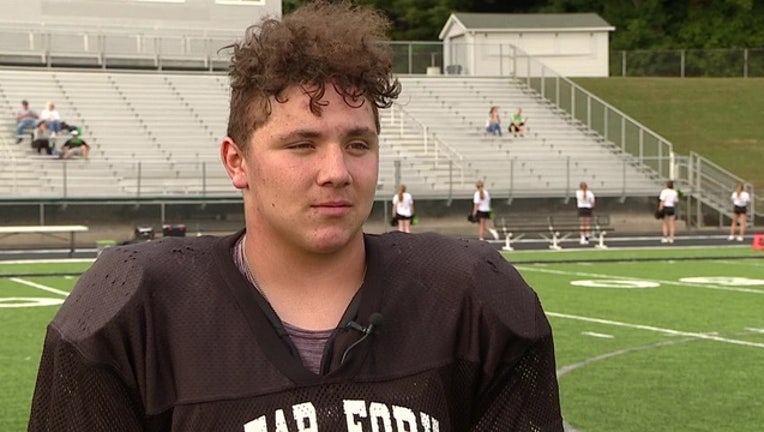 BUTLER, Ohio (FOX 13) - A high school football player in Ohio helped save his neighbor's life when a car fell on top of the man as he was working on it.

Sixteen-year-old Zac Clark was helping his mother do yard work outside their home when they heard their neighbor's wife calling for help, FOX 8 reports.

“Without even hesitation, he darted, like sprinted right over to the house,” the teen's mom, Lora Clark, said.

That's where he found the 39-year-old father pinned underneath a Volkswagen sedan in the driveway.

“I guess the jack broke or slipped and the car fell on top of him from his waist up,” Zac recalled. “Only thing I could see was his legs and he was struggling.”

The neighbor, who did not want to be identified, said the car's bumper was crushing his chest, while part of the car pressed down on his head. He said he usually uses braces, but wasn't that day.

"I just got my forearms underneath of it and just lifted," he said, getting the vehicle enough off the ground that his mother and the man's wife were able to pull him to safety.

The man was rushed to the hospital, where doctors told him Zac had saved his life. He is now back at home, recovering from broken ribs and bad bruising.

"I was thankful that I was like put in the opportunity to be able to save someone's life and, like I thank God for letting me be able to do that," the teen said.

Zac says he believes he found the strength to lift the car from his dad, who passed away last year.

"I wanted to be able to save him, let him be with his family," the teen said of his neighbor.