Canadians who owed money on their credit cards with Chase Bank have a little less debt on their plate after the company recently forgave all outstanding balances as it exited the Canadian credit card market.

WASHINGTON - A group of House Democrats from New York called on JPMorgan Chase to return overdraft fees collected during the COVID-19 pandemic and to stop charging them altogether in the future.

"During the pandemic, the largest banks in the United States charged billions of dollars in overdraft fees at a time when millions of Americans were struggling financially," the lawmakers wrote in a letter dated June 16. It was signed by Reps. Carolyn B. Maloney, Kathleen Rice, Gregory Meeks and Tom Suozzi.

The letter states that JPMorgan Chase collected nearly $1.5 billion in overdraft fees in 2020, which was "more than any other bank." It cites reporting based on FDIC filings.

"The overwhelming majority of overdraft fees are paid by consumers who tend to carry low balances and have relatively low monthly deposits. These fees also cause disproportionate harm to low-income consumers and communities of color," the lawmakers wrote.

"It is deeply troubling that financial institutions, including our nation’s largest banks, profited off fees charged to those struggling the most as the COVID-19 economic crisis left many families in severe financial distress," they continued.

The representatives also pointed out that New York was one of the hardest-hit states by the pandemic and noted a recent analysis that showed Long Island and New York City were among the top regions with the most overdraft fees in the state.

"On Long Island, data indicates that banks charged nearly $70 million in overdraft fees. JPM operates one-hundred and forty locations on Long Island, and estimates show that the bank was responsible for nearly forty percent of the total fees charged to consumers in the region during the pandemic," the letter states.

It also noted that in March 2020, federal banking regulators recommended that banks work with customers and waive overdraft fees during the pandemic.

The lawmakers urged JPMorgan Chase to refund the overdraft fees charged to customers during the pandemic and to change its overdraft policies "to stop charging these predatory fees in the future."

JPMorgan Chase declined to comment directly on the letter but said it waived fees and delayed payments on about 3 million accounts for customers who said they were affected by the COVID-19 pandemic, "with no questions asked."

The company said it waived more than $650 million in fees, including $430 million in overdraft fees.

"Our regulators encouraged banks to do things like waive fees and delay/defer payments for AFFECTED customers – which is exactly what we did," a JPMorgan Chase spokesperson said in a statement.

The company also pointed to a number of improvements made related to overdraft fees over the last few years. JPMorgan Chase has an account called Secure Banking with no overdraft fees and says it makes other accommodations to customers in specific situations. This includes showing check transactions as "pending" during the day to give customers a chance to make deposits to prevent over-drafting their accounts. 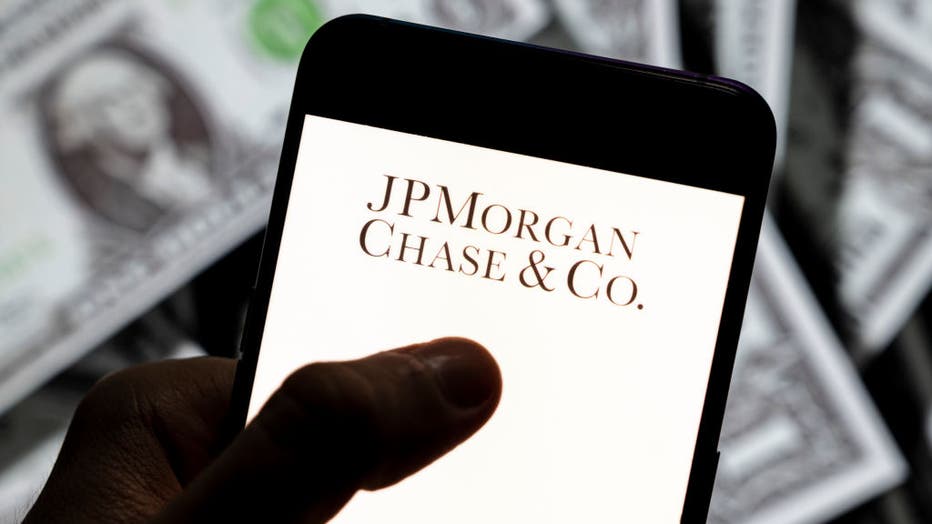 FILE - In this photo illustration, a JPMorgan Chase logo is displayed on a smartphone. (Photo Illustration by Budrul Chukrut/SOPA Images/LightRocket via Getty Images)

The lawmakers’ letter was addressed to JPMorgan Chase CEO Jamie Dimon, who also testified at a Senate hearing last month and got into a tense exchange with Democratic Sen. Elizabeth Warren of Massachusetts.

Warren, a longtime critic of the big banks, pushed hard on why they collected overdraft fees on checking accounts during the pandemic. She called Dimon "the king of the overdraft fee," maintaining that JPMorgan collects more than seven times in fees per account than its competitors. Dimon disputed the accuracy of Warren’s figures.

Dimon, along with the CEOs of Citigroup, Wells Fargo, Bank of America, Morgan Stanley and Goldman Sachs, appeared before the Senate panel as the U.S. economy is recovering from the recession. Big banks’ profits surged in the first three months of 2021 as the recovery took hold. They were able to release billions of dollars from their loan-loss reserves originally set aside in the early days of the pandemic last year.

The industry, which was blamed for the Great Recession more than a decade ago, has spent most of 2020 and this year trying to appear helpful and willing to work with borrowers and businesses. Banks across the country waived fees and put millions of mortgages into forbearance to shore up Americans’ distressed finances in the pandemic.

Earlier this month, Ally Financial announced that it is ending overdraft fees — becoming the first large bank to do so across its entire business. In its announcement, the Charlotte, North Carolina-based bank cited specifically the impact that overdraft fees have on Black and Latino households, which are historically poorer than their White counterparts and are hit with overdraft fees more often.

"Overdraft fees can be a major cause of anxiety," said Diane Morais, president of consumer and commercial banking at Ally Bank, in a statement. "It became clear to us that the best way to relieve that anxiety was to eliminate those fees."

But banks are still heavily reliant on overdraft fees for revenue. The industry collected more than $12 billion in overdraft fee revenue last year alone, according to industry research.