For the third time in four years, a Georgia woman is having to have hundreds of thousands of bees removed from the ceiling of her home.

DECATUR, Ga. - A Decatur homeowner is dealing with some unwanted tenants she can't seem to get rid of.

Lisa Ohrmundt had a colony of at least 100,000 bees removed from the ceiling of her living room Wednesday afternoon.

This seems like a homeowner's nightmare, but unfortunately, it's not the first time she's had this problem.

She's had two other colonies removed since 2017.

"Most people go their entire lives without colonies of bees set up camp," Ohrmundt said. "I think we're going to have to burn the house down because this is the third time Bobby has come to remove bees and they just keep coming back to a little bit different spot."

Bobby Chaisson is a bee removal expert and the operations director for Georgia Bee Removal.

"There were about 100,000 bees living in this one. It's a pretty good-sized colony that was living in the house," he said. 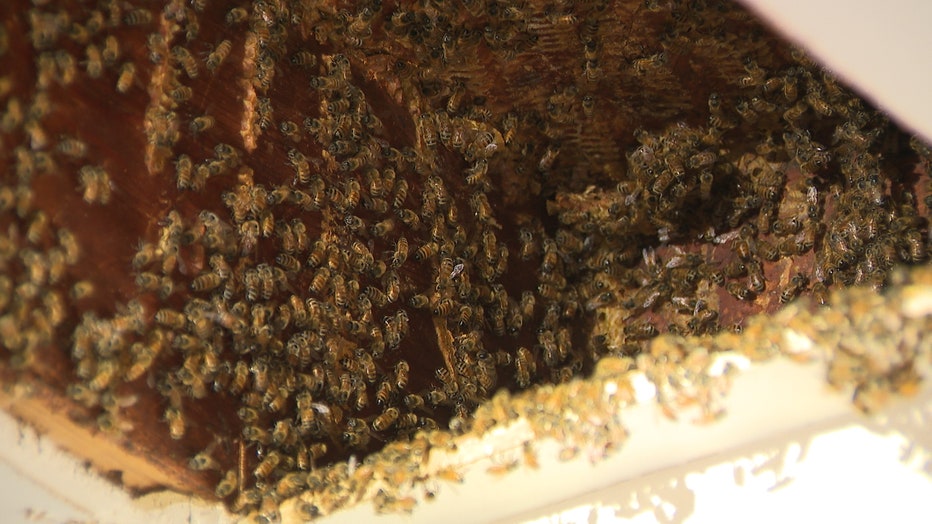 Even for someone who spends his days relocating these insects, a hive this size is not your everyday find.

"They were about four and a half, five feet long and then the full width of the floor joist, so about 18 inches wide and 12 to 15 inches deep. So that was a big space they were in, they were doing really well," Chaisson said.

Believe it or not, this is a little smaller than the first hive found back four years ago. That one had about 120,000 residents.

Chaisson said the bees picking this spot is really by chance. He likens the process to humans house hunting.

"It's the space. A bee flew by and went up inside and basically measured the house and decided this is the perfect spot," Chaisson said.

While these tenants are not welcome in her home, Ohrmundt said she can't help but be fascinated by what the insects are capable of creating.

"I thought that was it. I didn't think we'd be out here doing this again," Ohrmundt said. "But I'm not going to lie, I got kind of excited when I knew Bobby was coming. I was like, 'I gotta get home for this.'"