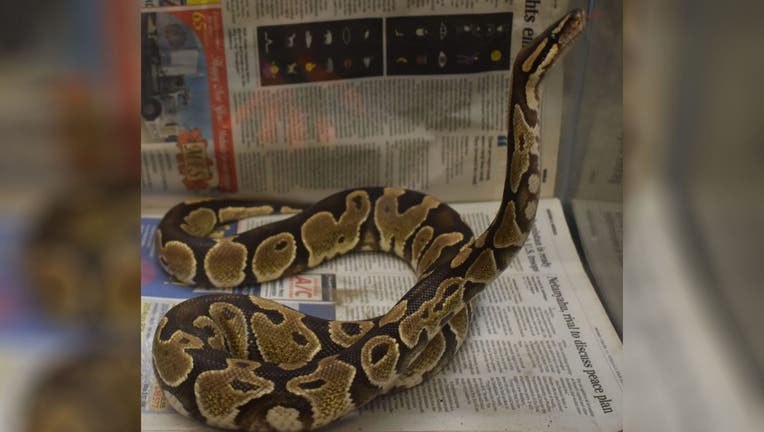 According to the DOA, these snakes may grow up to six feet in length and are native to Western and West-Central Africa. (Hawaii Department of Agriculture)

KAHALUU, Hawaii - Even snakes like to take trips to Hawaii.

A hunter captured a python during a trip to one of the islands’ forested areas. It’s unclear how the animal got there, as it’s not native to the state. Fortunately, it was turned over to authorities, because it could pose a serious threat to the area’s environment.

The four-foot-long snake was turned over to authorities last week after it was discovered near the area of Kahaluu, O’ahu, according to the Hawaii Department of Agriculture. It was reportedly captured by a resident who was out on a hunting trip, although he likely wasn’t expecting to find the python as Hawaii has no native snakes.

According to the DOA, these snakes may grow up to six feet in length and are native to Western and West-Central Africa. They are also common in the pet trade. Ball pythons are not venomous, instead killing their prey by coiling themselves around the other animal and suffocating it.

As they are not native to Hawaii, these snakes have no natural predators and the DOA labeled the animal as “a serious threat to Hawaii’s environment.” This is because they prey on birds and bird eggs, which is a problem since Hawaii is home to several endangered species.

Snakes like this can also pose a threat to “humans, pets and other domestic animals.”

Pythons and other snakes are “illegal to import and/or possess in Hawaii,” according to the DOA. Possessing an illegal snake can come with serious consequences and is labeled as a Class C felony.

The python is being safeguarded at the Plant Quarantine Branch of the DOA.