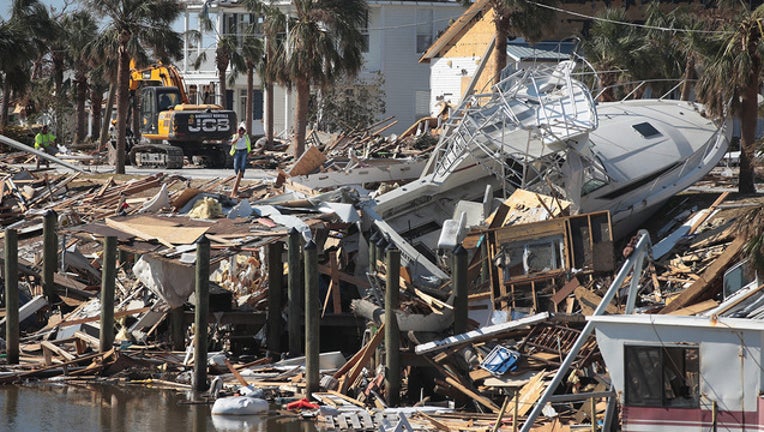 PANAMA CITY, Fla. (NSF) - Gov. Ron DeSantis directed the state Division of Emergency Management to speed money to Panhandle communities that are being swamped financially by “massive” amounts of debris from Hurricane Michael.

Emerging from a closed-door meeting Wednesday with Federal Emergency Management Agency Administrator Brock Long and local officials, DeSantis said that, in addition to upfronting disaster relief money to local governments, he will push the White House to increase federal reimbursements for debris cleanup.

“I think that this warrants it,” DeSantis said after the meeting at A.D. Harris Learning Village in Panama City. “Obviously, there is a lot of stuff going on in Washington right now, it’s not the best of times. But I think that would be very good for the local community.”

DeSantis and Long later planned to tour Tyndall Air Force Base, Mexico Beach and a site where temporary housing was being put up in Panama City.

In addition to receiving the concerns from local officials about debris removal, Long said additional temporary housing is on the way.

“I think we have to take a deep breath and understand large-scale disaster recovery takes many years. It’s not just a matter of months,” Long said. “While a lot’s been accomplished, we realize we have a long way to go.”

Long also said he doesn’t expect Michael’s recovery to require a request for additional emergency funding from Congress or that the response for Michael will be impacted by the federal shutdown, which has halted paperwork for people seeking reimbursements from 2017’s Hurricane Irma.

Florida Emergency Management Director Jared Moskowitz said the state understands the needs of local governments that are burning through their annual budgets responding to Michael.

“It’s an impossible task when you have a $5- or $10- or $20-million annual budget, but yet the debris is two or three times your annual budget,” Moskowitz said.

State officials have estimated the Oct. 10 hurricane created about 20 million cubic tons of debris, as the Category 4 storm barreled a path from Mexico Beach into Georgia. Much of the debris is still strewn across the region.

By comparison, Hurricane Irma, which cut a path from the Florida Keys to Jacksonville, resulted in about 2 million cubic tons of debris.

Local governments expect to eventually receive 75 percent reimbursement from the federal government for debris removal. DeSantis said his request is to bump that figure to 90 percent on the federal side.

“I’m just constantly surprised at the scale of the debris,” DeSantis said. “For a storm that hit a relatively small portion of our state to have 10 times the debris of a storm (Irma) --- that, granted, wasn’t as powerful but really ran up the whole state --- that is a huge, huge undertaking.”

DeSantis said he’s seen progress in the clean-up and that the quicker the debris is cleared, other steps in the recovery will follow, such as reopening businesses and being able to better welcome tourists.

Wednesday was the second time DeSantis has gone to Bay County to view the recovery effort since he took office Jan. 8.

Patronis has also urged the Triumph Gulf Coast Board to work with the state Division of Bond Finance to assist in establishing loans that local governments could use for rebuilding. Triumph Gulf Coast administers settlement money from the Deepwater Horizon disaster in the Gulf of Mexico.

“My team has reviewed the law governing Triumph funds, and it seems to provide many allowable uses,” Patronis wrote to the board Friday. “Specifically, we believe these funds are an appropriate funding source to help rebuilding efforts by making secured loans to local governments.”

The Triumph board is awaiting a report from Bay County about the economic impacts of the storm.