BRADENTON, Fla. - IMG's Elijah Green and Jackson Ferris are two of the best high school prospects in the country. They are believed to be the first teammates ranked among the top 10 who are eligible for this year's MLB Draft. When IMG takes the field opponents are on notice.

"We know, me and E.G. know, when we step on the field we always have a target on our back and we're going to get everybody's best game," said Ferris. "We just have to make sure we bring it every time too."

Green is a power-hitting 6-4 outfielder committed to the University of Miami. He's projected as the second-best high school player in the country and he will hear his name called early on Draft Day.

"Just seeing that me and Ferris are being recognized and showing that they can put their trust in their organization to pick us," commented Green.

Ferris is also 6-4, but brings heat from the mound. The left-handed pitcher has a fastball that has reached 97 miles per hour. He's ranked seventh among high school players. 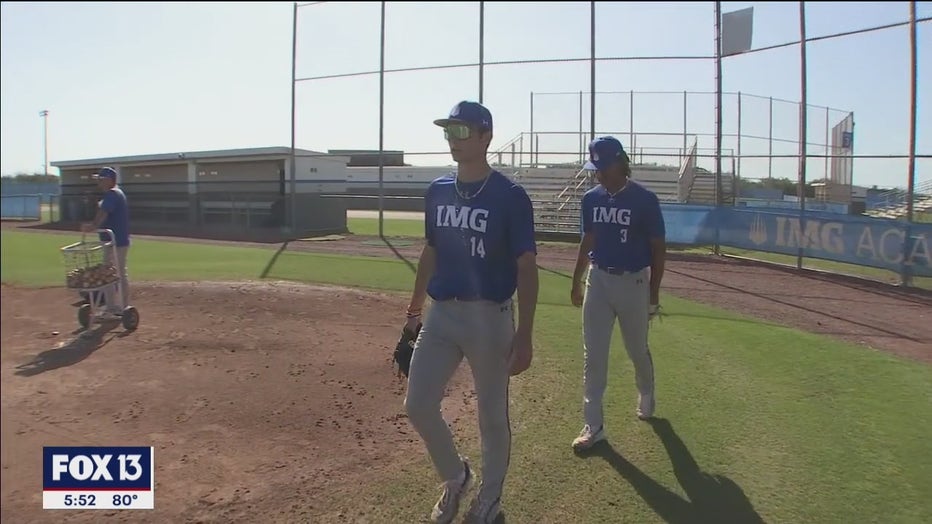 Both Green and Ferris grew up in athletic families. Green's father played professional football (four different NFL teams). Jackson's father played college basketball. When it came time to decide which sport to focus on neither followed in their father's footsteps.

"I told my mom first," admitted Green. "It was a little hard to tell him."

"It was weird," said Ferris. "I had my grandpa do it, breaking the news to him. My dad's dad. He was kind of surprised because I was better at football than baseball. It was kind of weird for me to choose a sport that I was not the best at. I think he kind of knew it was going to happen eventually because of me being a lefty pitcher, said Ferris."

The draft is still a few months away. Right now, their short-term goal is to finish their senior year undefeated and bring a national title to IMG.