How dosage is determined for the COVID-19 vaccine

Kawsar Talaat, a vaccinologist at the Johns Hopkins Bloomberg School of Public Health explains how vaccine scientists determine the correct dose for the COVID-19 vaccine.

WASHINGTON - More than 200 million Americans are now fully vaccinated against COVID-19, a notable milestone reached as cases and hospitalizations increase again in the U.S. and the worrisome omicron variant continues rapidly spreading across the globe.

The new figure accounts for about 60.5% of the total population and encompasses all ages who are eligible to receive a vaccine, which is currently individuals as young as 5. The data from the U.S. Centers for Disease Control and Prevention also shows that nearly 50 million people have already received a booster dose.

New cases in the U.S. climbed from an average of nearly 95,000 a day on Nov. 22 to almost 119,000 a day this week, and hospitalizations are up 25% from a month ago. The increases are due almost entirely to the delta variant, though the omicron mutation has been detected in about 20 states and is sure to spread even more. 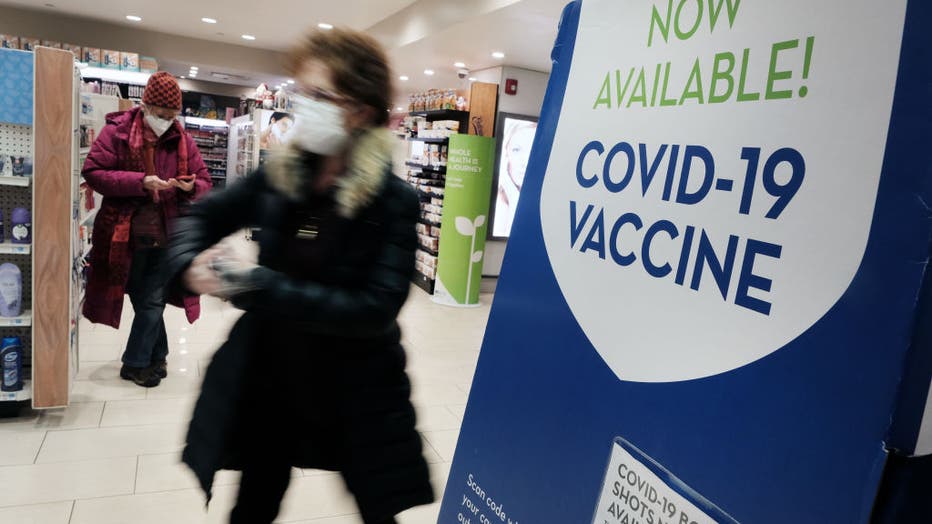 Deaths are running close to 1,600 a day on average, back up to where they were in October. And the overall U.S. death toll less than two years into the crisis could hit another heartbreaking milestone, 800,000, in a matter of days.

The situation is not as dire as last year’s holiday-season surge before the public had access to COVID-19 vaccines, but 60.5% of the population who are fully vaccinated have not been enough to prevent hot spots. The cold weather, Thanksgiving gatherings and a big rebound in holiday travel are all believed to be playing a role, along with public weariness with pandemic restrictions, health officials say.

RELATED: TSA anticipates surge in air travel through December holidays, here's how you can prepare

At the same time, some states, notably in highly vaccinated New England but also in the Midwest, are grappling with some of the worst surges since the start of the pandemic. Hospitals are filling up and reacting by canceling non-urgent surgeries or taking other crisis measures, while states are strongly promoting boosters.

Despite one of the highest vaccination levels in the country — over 74% of the population fully vaccinated — Vermont is coping with its biggest surge yet. In the last week, new cases per day are up 54%, and the number of people in the hospital with COVID-19 has climbed 18%.

The virus is preying on those who haven't gotten their shots: As of Tuesday, 90% of the COVID-19 patients in intensive care were unvaccinated.

"Obviously, it’s not where we want to be," Gov. Phil Scott said Tuesday, calling the situation "extremely frustrating."

Indiana has seen COVID-19 hospital admissions double in the last month and is approaching levels not seen since this time a year ago before vaccines were widely available.

RELATED: Oxford scientist behind COVID-19 vaccine says next pandemic may be worse

Still, U.S. officials have continued to urge people to get vaccinated and to receive booster shots, as well as take precautions such as wearing masks when among strangers indoors, saying anything that helps protect against delta will also help protect against other variants.

Last week, Biden appealed for Americans to get their boosters and unveiled a plan that would require private insurers to cover the cost of at-home COVID-19 tests.

"Experts say the COVID-19 cases will continue to rise in the weeks ahead this winter, so we need to be ready," Biden said during a visit to the National Institutes of Health in suburban Maryland after a briefing with scientific advisers.

The rule that private insurers cover at-home testing was being drafted, and details were still being worked out, officials said.

People insured by Medicare and Medicaid would not be eligible, but the White House said as many as 150 million people with private insurance would see easier and cheaper access to the at-home tests. The administration said it is making 50 million COVID-19 tests free for older people and other vulnerable groups for pickup at senior centers and community sites.

Meanwhile, the World Health Organization this week reiterated its advice to governments against the widespread use of boosters in their populations so that well-stocked countries instead can send doses to low-income countries that have largely lacked access to them.

"What is going to shut down disease is for everybody who is especially at risk of disease to become vaccinated," said Dr. Kate O’Brien, head of WHO’s department of immunization, vaccines and biologicals. "We seem to be taking our eye off that ball in countries."