SAN FRANCISCO - A fire engulfed a warehouse on San Francisco's Fisherman's Wharf early Saturday, sending a thick plume of smoke over the waterfront and threatening to spread to a historic World War II-era ship before firefighters brought the flames under control.

One firefighter is reported to be injured, but is in stable condition.

Firefighters were making multiple searches to ensure no one was inside the building on Pier 45, San Francisco Fire Lt. Jonathan Baxter told news reporters from the scene.

Baxter said fire investigators were trying to determine whether homeless people were inside. Earlier in the morning, Baxter told KTVU that no one was living at the warehouse.

“That is something of grave concern, that is why we're actively trying to confirm if anybody saw anybody in this building,” said Baxter.

“To our knowledge ... nobody is supposed to be in the building and we are hoping ... that there is no victim,” he said.

However, at least two workers told the San Francisco Chronicle they were inside the fish processing and storage warehouse when the fire broke out before dawn.

Alejandro Arellano, who works for La Rocca Seafood, was cleaning out a fish storage locker when the fire began, shortly after 4 a.m..

“I saw a lot of smoke. A few minutes later, fire everywhere,” he said. “It was very, very scary. I’ve never seen anything like it.”

The fire tore through the warehouse near the end of the concrete pier, causing its walls to collapse, Baxter said. The flames singed the first fire truck to respond to the scene, forcing firefighters to turn their hoses on the vehicle to save it, he said. 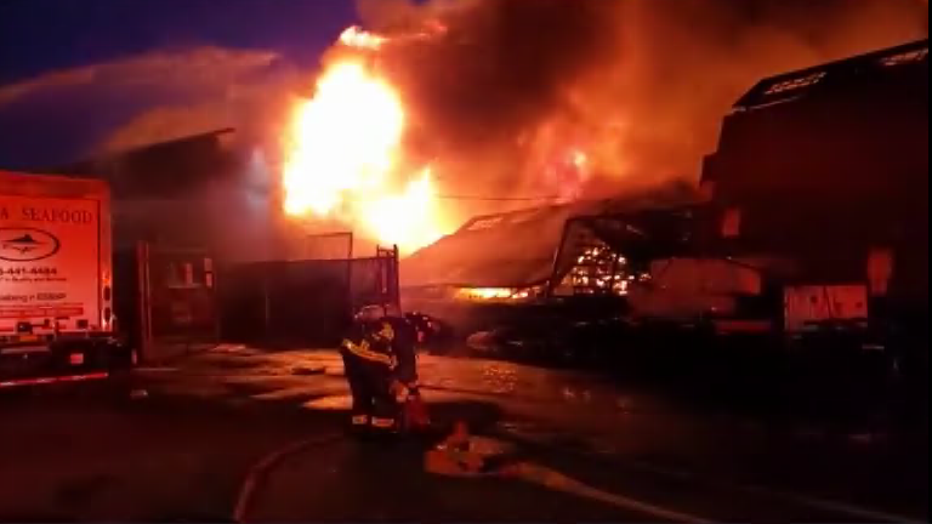 More than 130 firefighters fought the flames, with some using ladder trucks to drench the warehouse from above. A fire boat was used to protect the SS Jeremiah O'Brien, a liberty ship that stormed Normandy on D-Day in 1944.

“Our firefighters absolutely saved the SS Jeremiah O'Brien during this fire as flames were pinching on the side of this vessel,” Baxter said.

The ship docks by Pier 45 and is among numerous tourist attractions on the wharf, a maritime hub for cruises around San Francisco Bay as well as fishing boats hauling in the catch of the day. Visitors come for the Dungeness crabs, clam chowders served in sourdough bread bowls, the sea lions that hang out on the floating docks and shops and curiosities on Pier 39. Shops and restaurants on the wharf have been shut by the city’s stay-at-home order to slow the spread of the coronavirus and were expected to reopen on May 31. Fishing companies that have been operating out of Pier 45 said the fire exacerbated an already tough business climate caused by the pandemic.

Kenny Belov, owner of the seafood wholesaler TwoXSea, told the Chronicle his building near the warehouse was not damaged but he worried a power outage on the pier could ruin the fish in his freezer. 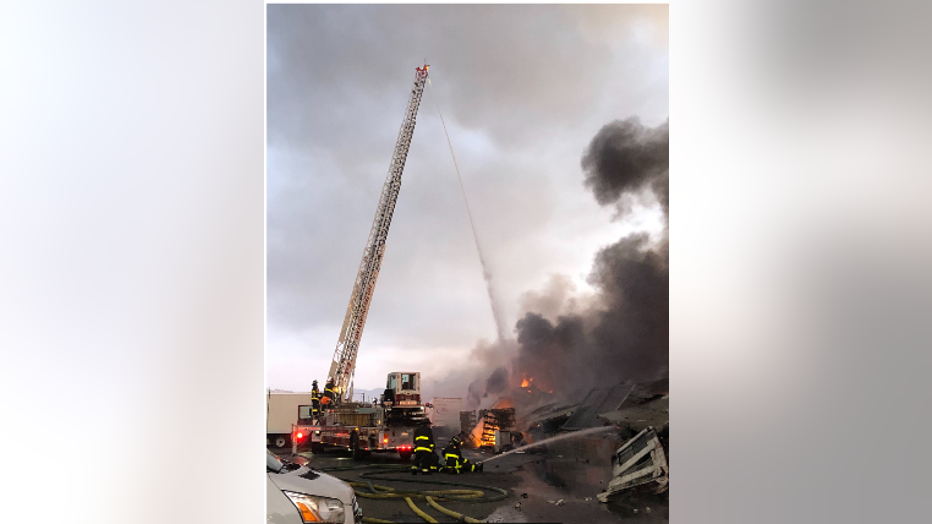 “Not that it would ever need this, but the seafood industry didn’t need this now,” Belov said. “It’s surreal. We’ve obviously had a tough go the last couple months, with restaurants (closed). … Of all the problems in the world, this is not a big one. But it’s frustrating.”

Coast Guard crew members and police assisted by keeping other vessels away from the pier. 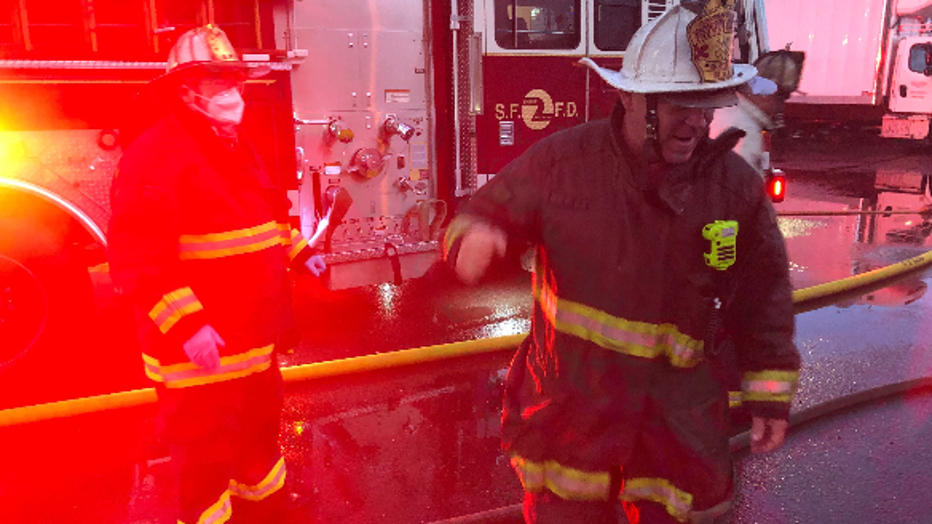 Fire investigators were assessing any damage to the pier and were looking into the cause of the blaze, Baxter said.

Firefighters had to pull back, as the scene became too dangerous, because flames had consumed so much of the building, and the walls were collapsing. 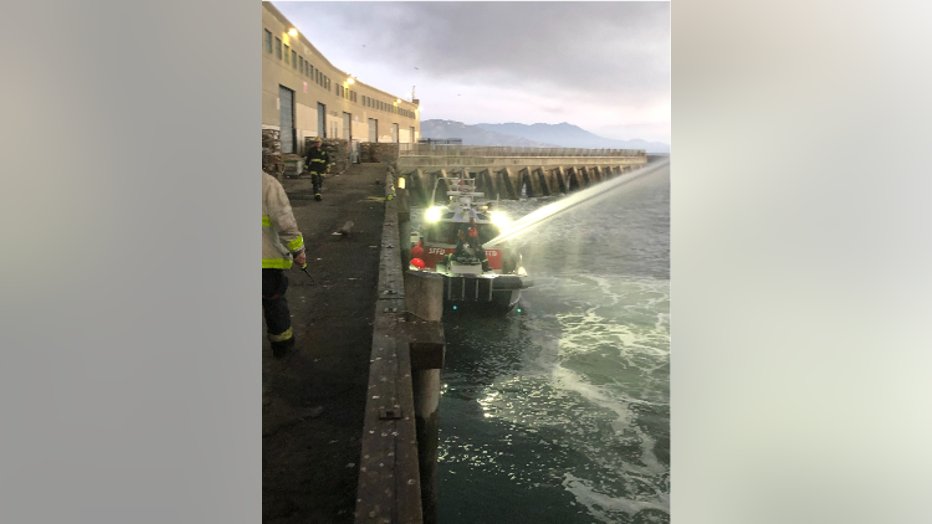 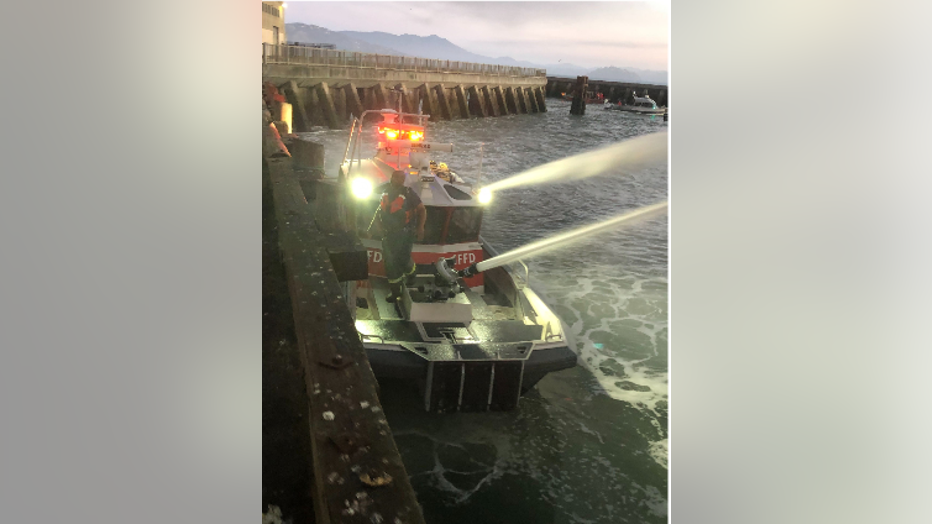 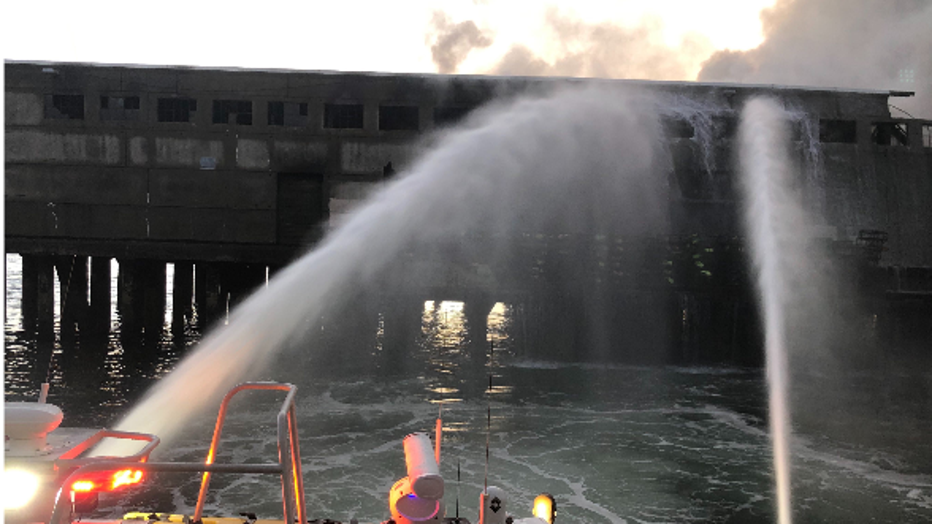