The 2022 Bucs break training camp started with a reloaded roster. It's a mix of Super Bowl Champs with an injection of young fresh talent.

TAMPA, Fla. - It costs big bucks to be a Buccaneers fan.

A recent survey by Bookies.com compared the cost for a family of four to attend games at each NFL stadium this season. It turns out, that it's more expensive to go to a Tampa Bay Bucs game this year than it is in 30 other NFL cities.

The report took into account the cheapest admission tickets, parking, two beers, two sodas, and four hot dogs. Across the league, the average price for a family of four to attend a game was $536.77.

They found that the average family of four will pay roughly $947 to attend a Tampa Bay game, making Raymond James Stadium the second-most expensive place for a family to catch a game.

RELATED: Tampa Bay Buccaneers ready to kick off the season as the team to beat 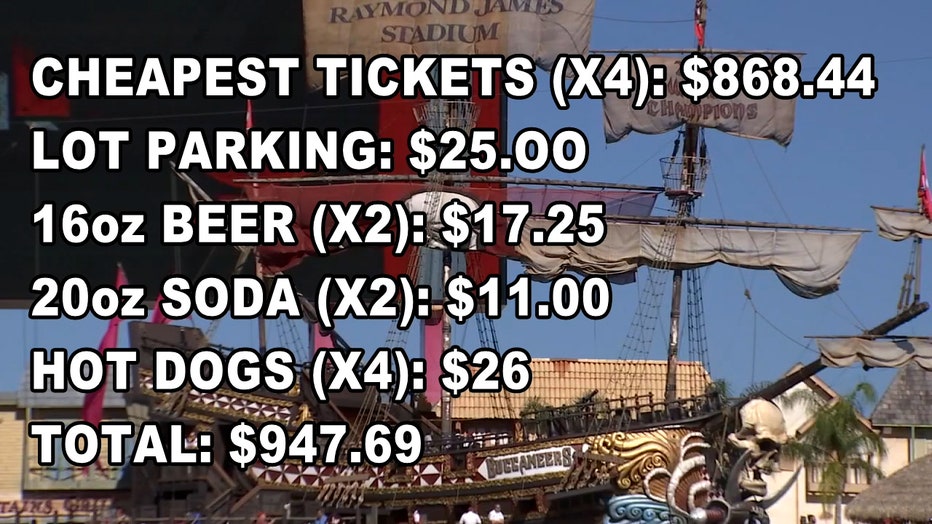 Experts said inflation and the size and location of RayJay are contributing to the high prices – plus, the opportunity to watch a Super Bowl championship team and the GOAT, Tom Brady.

"You're going to see higher ticket prices," explained Daniel Kaplan, sports business writer for The Athletic, "and higher parking prices and higher concessions of teams that do better."

The San Francisco 49ers are the most expensive team to watch, according to the report. Game tickets alone will set a family back $888.89. When factoring in the price of parking and concessions, the total cost of attending a game would be $1,028.34.

In comparison, the cheapest team in the league, according to the survey, is the Arizona Cardinals. Four tickets cost just $169, with the total to attend the game being $228.05.

Games at home stadiums for the Cardinals, Jacksonville Jaguars, Indianapolis Colts, New York Jets, and Denver Broncos average out to under $325.

Read more here about the cost to attend an NFL game.