NASA’s James Webb Space Telescope, the world’s largest and most powerful, rocketed away from South America into the sky Christmas morning.

It took off from French Guiana on South America’s northeastern coast to fewer spectators than expected, given the launch fell on Christmas after a series of untimely delays and amid a global surge in COVID-19 cases.

Around the world, astronomers had eagerly waited to see Webb finally taking flight after years of setbacks. Last-minute technical snags bumped the launch nearly a week, then gusty wind pushed it to Christmas. Inside Launch Control, there was a smattering of Santa hats.

Cheers and applause erupted in and outside Launch Control following Webb’s flawless launch, with jubilant scientists embracing one another amid shouts of "Go Webb!" and signs that read: "Bon Voyage Webb." Cameras on the rocket’s upper stage provided one last glimpse of the shimmering telescope, before it sped away.

Around the world, astronomers had eagerly waited to see Webb finally taking flight after years of setbacks. Last-minute technical snags bumped the launch nearly a week, then gusty wind pushed it to Christmas. Inside Launch Control, there was a smattering of Santa hats. Cheers and applause erupted in the center following Webb's flawless launch, with jubilant scientists embracing one another and repeated exclamations of "Go Webb!"

"We launch for humanity this morning," said Arianespace CEO Stephane Israel. "After Webb, we will never see the skies in quite the same way."

The telescope, intended as the successor to the aging Hubble Space Telescope, is on its way on its high-stakes quest to behold light from the first stars and galaxies and scour the universe for hints of life. 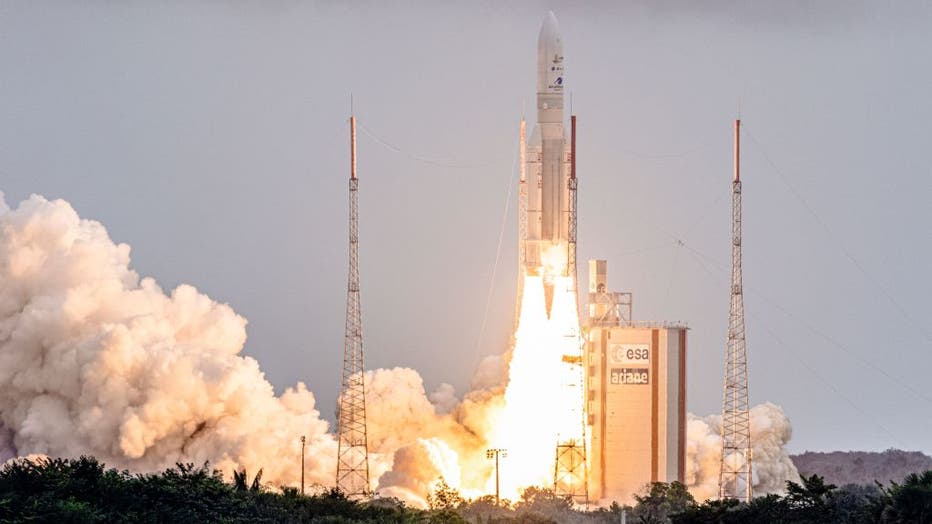 Arianespace's Ariane 5 rocket with NASAs James Webb Space Telescope onboard lifts up from the launchpad, at the Europes Spaceport, the Guiana Space Center in Kourou, French Guiana, on December 25, 2021. - The telescope, the most powerful space observ

Where is the James Webb Space Telescope going?

Its destination is 1 million miles away, or more than four times beyond the moon.

It will take a month to get there and another five months before its infrared eyes are ready to start scanning the cosmos.

NASA is shooting for 10 years of operational life from Webb. Engineers deliberately left the fuel tank accessible for a top-off by visiting spacecraft, if and when such technology becomes available.

What will the James Webb Space Telescope see?

Its infrared telescope will directly observe parts of space and time that have never been seen before, gazing into a period when the very first stars and galaxies were formed — more than 13.5 billion years ago. It will stare down black holes and hunt for alien worlds, scouring the atmospheres of planets for water and other possible hints of life.

NASA Administrator Bill Nelson called Webb is a time machine that will provide "a better understanding of our universe and our place in it: who we are, what we are, the search that's eternal."

"We are going to discover incredible things that we never imagined," Nelson said following liftoff, speaking from Florida's Kennedy Space Center. But he cautioned: "There are still innumerable things that have to work and they have to work perfectly."

First, the telescope’s enormous mirror and sunshield need to unfurl; they were folded origami-style to fit into the rocket's nose cone.

If all goes well, the sunshield will be opened three days after liftoff, taking at least five days to unfold and lock into place. Next, the mirror segments should open up like the leaves of a drop-leaf table, 12 days or so into the flight.

In all, hundreds of release mechanisms need to work — perfectly — in order for the telescope to succeed.

Don’t ask astronomers to choose between Hubble and the new kid on the cosmic block.

"Comparing Hubble and Webb is like asking if you will love your second child as much as your first," said Susan Mullally, Webb’s deputy project scientist. "Hubble will always be loved for its awe-inspiring images of our universe and will continue to collect important data for astronomers. Webb gives us new and unique eyes of places that we have never been able to reach."

Specifically, Webb is designed to peer deeper into space to see the earliest stars and galaxies that formed in the universe and to look deep into nearby dust clouds to study the formation of stars and planets, NASA says. To do this, Webb has a much larger primary mirror than Hubble — 2.7 times larger in diameter — which gives it more light-gathering power.

Hubble has stared as far back as 13.4 billion years, disclosing a clumpy runt of a galaxy that is currently the oldest and farthest object ever observed. Astronomers are eager to close the 300 million year gap with Webb and draw ever closer in time to the Big Bang, the moment the universe formed 13.8 billion years ago.

"It’s like looking at the picture book of my kids and missing the first two years, right? Trying to figure out where they come from," said NASA science chief Thomas Zurbuchen.

Overall, NASA says it prefers to call Webb the "successor," rather than replacement, because its science goals were motivated by results from Hubble.

The Space Telescope Science Institute in Baltimore operates Hubble and will also oversee Webb. At least five to 10 years of observing are planned.

Who is the James Webb Space Telescope named after? 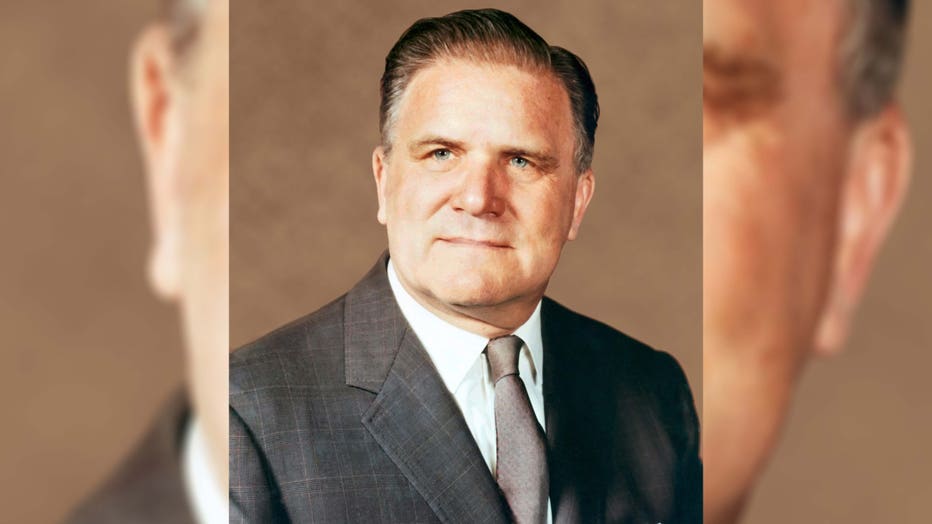 James E. Webb ran the fledgling space agency from February 1961 to October 1968. He believed that NASA had to strike a balance between human space flight and science. (Credit: NASA)

The space-based observatory is named after James E. Webb (1906-1992), NASA's second administrator. Webb is best known for leading the Apollo program, a series of lunar missions that ultimately landed the first humans on the Moon.

"Many believe that James E. Webb, who ran the fledgling space agency from February 1961 to October 1968, did more for science than perhaps any other government official and that it is only fitting that the Next Generation Space Telescope would be named after him," the space agency states on its website.

By the time Webb retired just before the first moon landing in July of 1969, NASA had launched more than 75 space science missions — studying everything from the stars and galaxies, the sun and the environment of space above Earth's atmosphere.

How much did the James Webb Space Telescope cost?

Hubble was years late and millions over budget by the time it rocketed into orbit in 1990. Webb also is years late with huge cost overruns.

NASA’s tab for Hubble from its 1970s development until now: $16 billion, adjusted for inflation. That doesn’t include all the shuttle flights for launch and repairs.

Webb’s price tag is an estimated $10 billion; that includes the first five years of operation. The European Space Agency is picking up the launch costs, with the French-built Ariane 5 rocket providing Webb’s liftoff.

"We chose Ariane in the early 2000's for a combination of reliability (it was the only launch vehicle that met NASA's requirements for launching a mission like Webb) and for the value it brings via our international partnership," the space agency explains on its website.

By "value," NASA means that the European Space Agency provides it with a launch vehicle and associated services at no cost — while the U.S. space agency guarantees European scientists a fraction of observing time on Webb (roughly 15%).

This story was reported from Detroit and Cincinnati. The Associated Press contributed.