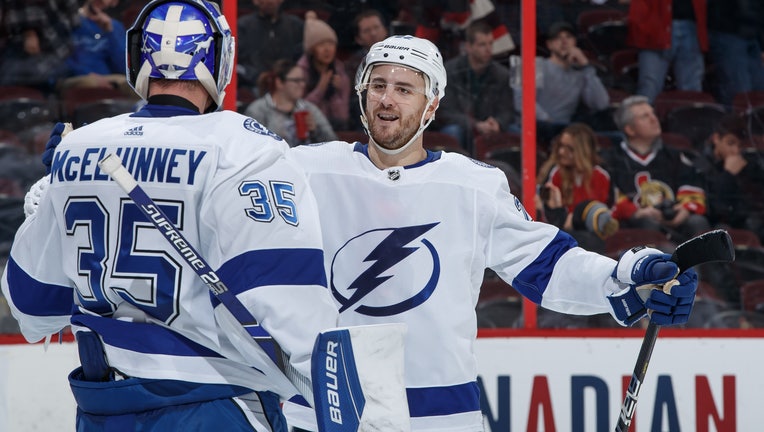 OTTAWA, ON - JANUARY 4: Kevin Shattenkirk #22 and Curtis McElhinney #35 of the Tampa Bay Lightning celebrate their win over the Ottawa Senators at Canadian Tire Centre on January 4, 2020 in Ottawa, Ontario, Canada. (Photo by Andre Ringuette/NHLI via

OTTAWA, Ontario - Johnson scored with 1:30 left in regulation, and the Tampa Bay Lightning beat the Ottawa Senators 5-3 on Saturday night for their sixth straight win.

Chris Tierney, Jean-Gabriel Pageau and Mark Borowiecki had goals for the Senators, and Craig Anderson finished with 23 saves.

After Johnson’s tiebreaking goal, the final minute of play had the home fans on their feet as many believed the Senators had tied the score again, but the goal was called off because Colin White deliberately head-butted the puck past McElhinney.

Killorn sealed the win with an empty-netter with 7 seconds remaining.

Borowiecki beat McElhinney with a slap shot on his glove side to give the Senators a 3-2 lead with 9 seconds to go in a wild second period that followed a scoreless first.

Point tied it at 8:37 of the third as he showed some patience to handcuff Borowiecki and fire a shot past Anderson.

Tierney missed a great chance in the final minute of play in the first period, but made up for it by scoring short-handed in the first minute of the second to open the scoring. On an odd-man rush, Tierney deflected a shot off Victor Hedman’s stick and in at 46 seconds. It was the Senators’ eighth short-handed goal of the season.

The Lightning scored twice in 65 seconds to take the lead. First, Hedman found Verhaeghe in the slot and he buried the puck into an empty cage at 2:40. Then, just over a minute later, a trailing Shattenkirk picked up a loose puck and fired it past Anderson.

Pageau matched his career-high with his 19th on a one-timer that beat McElhinney blocker side to tie it 2-2. It was also his first power-play goal of the season.

NOTES: D Mike Reilly, acquired from Montreal on Thursday, made his debut for the Senators. ... Ottawa’s Anthony Duclair is day-to-day after blocking a shot in Thursday’s game against Florida. ... Scott Sabourin was a healthy scratch for the Senators as Mikkel Boedker entered the lineup for the first time since Nov. 25. ... Ottawa lost for just the second time in 14 games when leading after two periods. ... The Lightning won for just the fourth time in 13 games in which they trailed after two periods. ... Tampa Bay has now allowed seven short-handed goals. ...

UP NEXT
Lightning: At Carolina on Sunday to wrap up a four-game trip.
Senators: At Washington on Tuesday night.
___