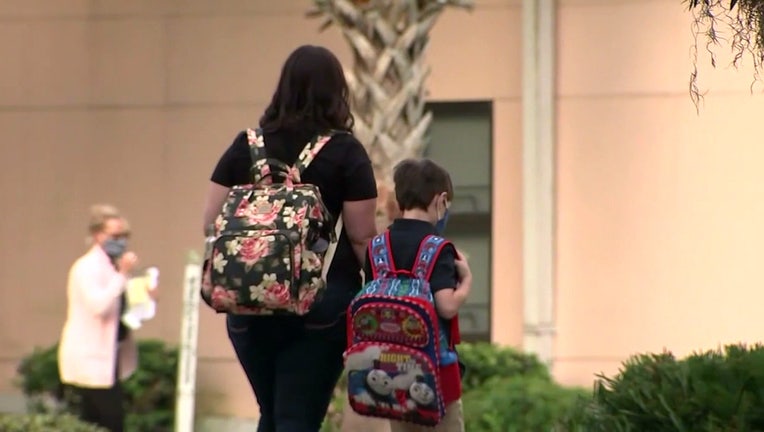 TALLAHASSEE, Fla. - A Leon County circuit judge Thursday lifted a stay of his earlier ruling that a state order requiring schools to reopen in August is unconstitutional. In response, Hillsborough County announced an emergency meeting for Friday morning.

Late Tuesday, attorneys for the Florida Education Association and the Orange County teachers union asked Dodson to lift the stay. The following day, the state’s lawyers argued the stay should remain in place, saying that failing to do so would “sow confusion and disarray” among students, local school officials and families.

But in a three-page order Thursday, Dodson rejected the state’s arguments, writing that they were essentially a rehash of the state’s case presented during a 2 ½-day hearing last week.

“The equities are overwhelmingly tilted against maintaining the automatic stay,” the judge wrote.

More than 711,000 schoolchildren had resumed in-person instruction as of Wednesday, according to court documents. All school districts outside of Broward, Miami-Dade and Palm Beach counties, which were exempted from Corcoran’s mandate, have either opened or plan to reopen on Monday.

Hillsborough County, which played a large role in the lawsuit because of the county's thwarted attempt to delay on-campus classes, announced an emergency school board meeting for 8 a.m. Friday in response to the ruling.

RELATED: Despite judge's ruling, no changes to Hillsborough back-to-school plan -- yet

DeSantis and Corcoran have staunchly maintained that families need to be able to choose whether to send children back to school or continue with distance learning, which began in March when schools were shuttered statewide as the coronavirus began spreading in Florida.

The governor shrugged off the legal setbacks when speaking to reporters Thursday afternoon.

“Here’s what I was telling the commissioner when he was telling me about the ruling. I said, you know if the appeals court rules against the state in three weeks … the parents are going to still want to have that (schooling) option, so functionally it’s not really going to change,” DeSantis said during an appearance in Tampa. “I think we will win the appeal, obviously, otherwise we wouldn’t be doing it. But I think a lot of parents have been very, very happy to have that meaningful choice and that is what we have worked hard to deliver.”

RELATED: State of Florida ordered health directors not to give yes-or-no input on school reopenings

The fight over schools reopening in Florida has garnered national attention, with the leader of the country’s largest teachers union this week saying that the Sunshine State case could be a blueprint for other states.

President Donald Trump’s eldest son, Donald Trump Jr., waded into the issue Tuesday in a Fox News opinion in which he slammed Dodson and the unions.

“It is unacceptable for Democrats and the activists who control teachers’ unions to put their pursuit of power ahead of the educational needs of our children,” Trump Jr. wrote.

In Thursday’s order, Dodson scolded the state for misrepresenting his temporary injunction.

“It did not order that Florida’s schools statewide be closed. This court does not have authority to enter such an order. What the order did, for the reasons stated, is require that local school districts be given authority under their individual circumstances to open or close the local schools, based on local conditions,” the judge wrote.

In its lawsuit challenging Corcoran’s July 6 order, the Florida Education Association alleged that the mandate violates the Florida Constitution’s guarantee to a “safe” and “secure” public education. The Orange County teachers union filed a similar legal challenge, and Dodson combined the cases. The NAACP joined the consolidated case as a plaintiff later.

Dodson noted that the plaintiffs, who include parents, “face irreparable injury” if Corcoran’s order is permitted to remain in effect during the state’s appeal, while the harm to the state “would be negligible” if his Monday ruling stays in place.

“Potential irreparable injury will be suffered by hundreds of thousands of school children, many teachers, and the community at large if the temporary injunction order is stayed,” the judge wrote.

“Teachers are resigning or retiring due to the risk of exposure to COVID-19. Young students are being exposed to the virus while there is uncertainty as to the long-term effects of the virus and whether children can transmit the disease to adults. The record reflects that medical determinations must be made at the local level to determine if and when it is safe to reopen a county’s brick-and-mortar schools,” the judge wrote.

The immediate impact of Dodson lifting the stay, however, was unclear.

A little less than half of the state’s 2.8 million schoolchildren had signed up to return to schools in person as classrooms reopen this month, according to Jacob Oliva, chancellor of Florida’s K-12 school system.