OKLAHOMA CITY - Oklahoma's governor spared the life of Julius Jones on Thursday, just hours before his scheduled execution that had drawn widespread outcry and protests over doubts about his guilt in the slaying of a businessman more than 20 years ago.

Gov. Kevin Stitt commuted the 41-year-old Jones’ death sentence to life imprisonment. He had been scheduled for execution at 4 p.m.

"After prayerful consideration and reviewing materials presented by all sides of this case, I have determined to commute Julius Jones’ sentence to life imprisonment without the possibility of parole," Stitt said in a news release.

A crowd of Jones' supporters at the Oklahoma Capitol broke out into loud applause and cheers when the decision was announced shortly after noon Thursday, and more than 100 supporters who had gathered outside the prison in McAlester erupted in cheers.

"Today is a day of celebration. It’s a day to recognize all the people who have come together to be able to fight for Julius," said Rev. Keith Jossell, Jones' spiritual adviser. 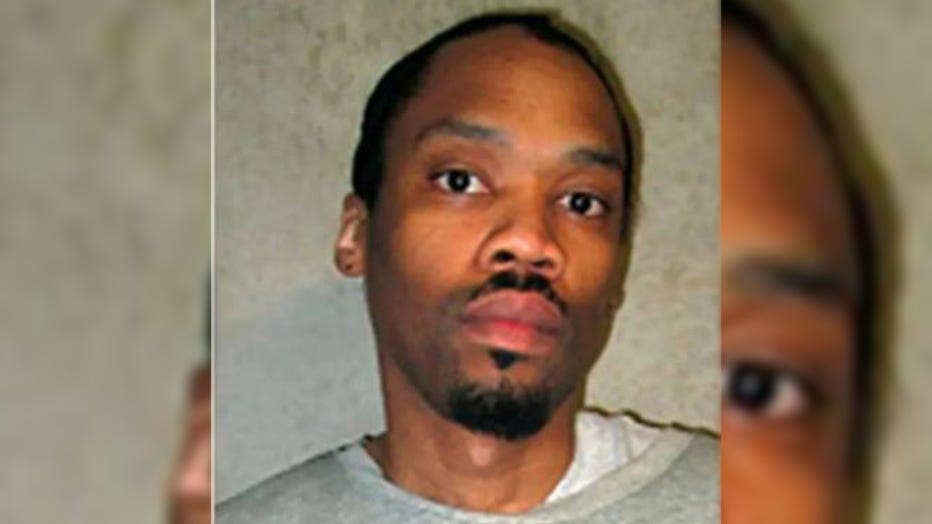 "For over twenty years, I have been haunted by the idea of watching my baby boy die in an execution chamber for a murder that occurred when he was home with his family," Madeline Davis-Jones said. "I still believe that every day Julius spends behind bars is an injustice, and I will never stop speaking out for him or fighting to free him. But today is a good day, and I am thankful to Governor Stitt for that."

Earlier Thursday, Jones' attorneys filed a last-minute emergency request seeking a temporary stop to his execution, saying Oklahoma’s lethal injection procedures pose a "serious and substantial risk of severe suffering and pain to prisoners." The lawyers cited last month’s execution in which John Marion Grant convulsed and vomited as he was put to death.

Oklahoma's methods for capital punishment have been a concern for years. Just Wednesday, in a separate death row case, the state's Pardon and Parole Board voted 3-2 to grant clemency, citing lethal injection protocols.

Earlier this month, that same board also recommended in a 3-1 vote that Stitt commute Jones’ sentence to life in prison with the possibility of parole. Several panel members said they doubted the evidence that led to his conviction.

Amanda Bass, a lawyer representing Jones, said the team had hoped Stitt would grant Jones a chance at parole, but they were grateful that he wasn't being executed.

"Governor Stitt took an important step today towards restoring public faith in the criminal justice system by ensuring that Oklahoma does not execute an innocent man," Bass said in a statement.

Jones' looming execution — and Stitt's silence on his decision — prompted high school students across Oklahoma City to walk out of their classes Wednesday, and protests had been planned Thursday in Los Angeles; Washington; Newark, New Jersey; and Saint Paul, Minnesota. Prayer vigils were held at the Oklahoma state Capitol, and barricades were erected outside the governor’s mansion.

Jossell said Jones sounded overwhelmed by the support when they talked earlier Thursday.

"Julius has always been so amazed by the fact that so many people God has brought together, Republicans and Democrats, Black, white, gay, straight, Native," Jossell said. "He is so grateful that all of these people have come together."

Oklahoma Gov Kevin Stitt commuted the sentence of Julius Jones, who was due to be executed, on Thursday, November 18. (Credit: @nhshelby via Storyful)

At the Capitol, Devona Willis, 45, an Oklahoma City woman, described the announcement as "a celebration."

"It’s kind of like somebody gave you a million dollars. You’re not just gonna say ‘Yay!’ and be done with it," she said.

Jones was convicted of first-degree murder and sentenced to die for the 1999 shooting death of Paul Howell, a businessman from the Oklahoma City suburb of Edmond, during a carjacking.

The profile of Jones’ case grew significantly after it was featured in "The Last Defense," a three-episode documentary produced by Oscar-winning actress Viola Davis that aired on ABC in 2018. After that, reality television star Kim Kardashian West and other professional athletes with Oklahoma ties, including NBA stars Russell Westbrook, Blake Griffin and Trae Young, and NFL quarterback Baker Mayfield, urged Stitt to commute Jones’ death sentence and spare his life.

Kardashian West said Thursday on Twitter that she spent much of Wednesday on the phone with Jones between his visits with lawyers and his family. She also thanked Stitt and the parole board.

"I’m so grateful to everyone who used their voice and helped to save Julius’s life today," she said.

Jones alleges he was framed by the actual killer, a high school friend and co-defendant who was a key witness against him. He and his family maintain he was at home the night of Howell’s murder, eating dinner and playing games with his siblings, and that the jury was never heard this information at trial.

Oklahoma Gov Kevin Stitt commuted the sentence of Julius Jones, who was due to be executed, on Thursday, November 18. (Credit: Terence Crutcher Foundation via Storyful)

But Oklahoma County District Attorney David Prater and the state’s former attorney general, Mike Hunter, have said the evidence against Jones is overwhelming. Oklahoma's current attorney general, John O’Connor, said Thursday that he respected Stitt’s decision to commute the sentence but that he remained convinced of Jones' guilt.

"We are greatly disappointed that after 22 years, four appeals, including the review of 13 appellate Judges, the work of the investigators, prosecutors, jurors, and the trial Judge have been set aside," O'Connor said.

Information from trial transcripts shows that witnesses identified Jones as the shooter and placed him with Howell’s stolen vehicle. Investigators also found the murder weapon wrapped in a bandanna with Jones’ DNA in an attic space above his bedroom. Jones claimed in his commutation filing that the gun and bandanna were planted there by the actual killer, who visited Jones’ house after the killing.

Howell’s sister, Megan Tobey, and two young daughters were in Howell’s SUV when the carjacking happened in his parents’ driveway. Tobey testified before the board that she saw Jones shoot her brother.

"We know Governor Stitt had a difficult decision to make," the Howell family said Thursday in a statement. "We take comfort that his decision affirmed the guilt of Julius Jones and that he shall not be eligible to apply for, or be considered for, a commutation, pardon or parole for the remainder of his life."

Last month, Oklahoma ended a six-year moratorium on executions brought on by concerns over its lethal injection methods. Grant, 60, convulsed and vomited as he was being put to death Oct. 28.

He was the first person in Oklahoma to be executed since a series of flawed lethal injections in 2014 and 2015. Richard Glossip was just hours away from being executed in September 2015 when prison officials realized they had the wrong lethal drug. It was later revealed that the same wrong drug had been used to execute an inmate in January 2015.

The drug mix-ups followed a botched execution in April 2014 in which inmate Clayton Lockett struggled on a gurney before dying 43 minutes into his lethal injection — and after the state’s prisons chief ordered executioners to stop.