PARKLAND, Fla. - Roses brought to honor love on that Valentine's Day in 2018 lay withered, their dried and cracked petals scattered across classroom floors still smeared with the blood of victims gunned down by a former student more than four years ago.

Bullet holes pocked walls, and shards of glass from windows shattered by gunfire crunched underfoot at Parkland’s Marjory Stoneman Douglas High School, where shooter Nikolas Cruz killed 14 students and three staff members. Nothing had been changed, except for the removal of the victims' bodies and some personal items.

Twelve jurors and 10 alternates who will decide whether Cruz gets the death penalty or life in prison made a rare visit to the massacre scene Thursday, retracing Cruz's steps through the three-story freshman building, known as "Building 12." After they left, a group of journalists was allowed in for a much quicker first public view. 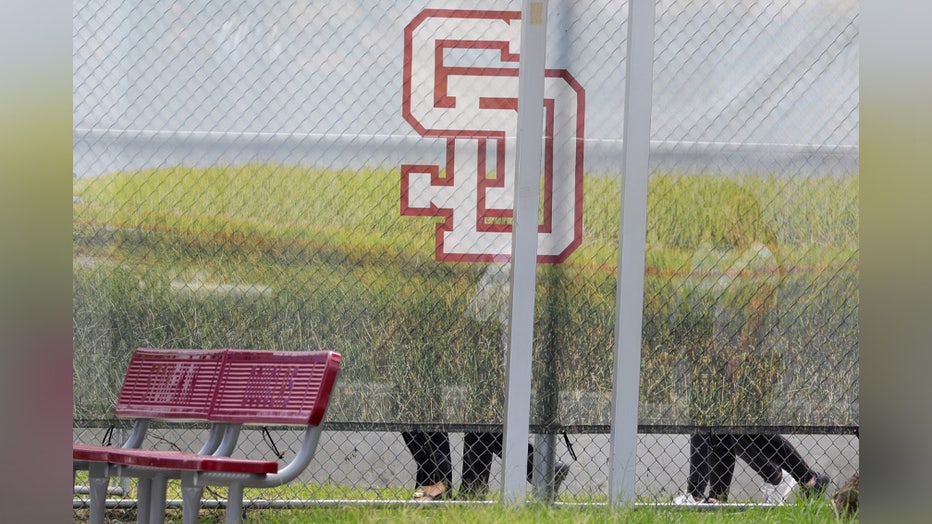 Jurors walk in and around the 1200 building, the crime scene where the 2018 shootings took place, at Marjory Stoneman Douglas High School in Parkland on August 4, 2022 in Parkland, Florida. Confessed shooter Nikolas Cruz waived his right to be presen

The sight was deeply unsettling: Large pools of dried blood still stained classroom floors. A lock of dark hair rested on the floor where one of the victims' bodies once lay. A single black rubber shoe was in a hallway. A stuffed teddy bear lay abandoned in a stairwell while browned rose petals were strewn across a hallway where six people died.

In classroom after classroom, open notebooks displayed uncompleted lessons. A blood-coated book called, "Tell Them We Remember" sat atop a bullet-riddled desk in the classroom where teacher Ivy Schamis taught students about the Holocaust. A sign attached to a bulletin board read: "We will never forget." Two students died there.

In the classroom of English teacher Dara Hass, where the most students were gunned down, there were essays about Malala Yousafzai, the Pakistani teenager shot by the Taliban for going to school, and who has since become a global advocate for educational access for women and girls.

"A bullet went straight to her head but not her brain," one student wrote. "We go to school every day of the week and we take it all for granted," wrote another. "We cry and complain without knowing how lucky we are to be able to learn."

The door of Room 1255, teacher Stacey Lippel's classroom, was pushed open — like others to signify that Cruz shot into it. Hanging on a wall inside was a sign reading, "No Bully Zone." The creative writing assignment for the day was on the whiteboard: "How to write the perfect love letter."

And still hanging on the wall of a second-floor hallway was a quote from James Dean: "Dream as if you’ll live forever, live as if you’ll die today."

In slain teacher Scott Beigel's geography classroom, a laptop was still open on his desk. Student assignments comparing the tenets of Christianity and Islam remained, some graded, some not. On his whiteboard, Beigel, the school's cross-country coach, had been writing the gold, silver and bronze medalists in each event at the Winter Olympics, which had begun five days earlier.

The Sun-Sentinel reports that after Cruz shot and killed his last two victims, he then turned his attention to two windows on the third floor, where six bullet holes are visible.

Had the windows shattered, Cruz would have had a clear shot at hundreds of students as they fled the campus, according to the report. 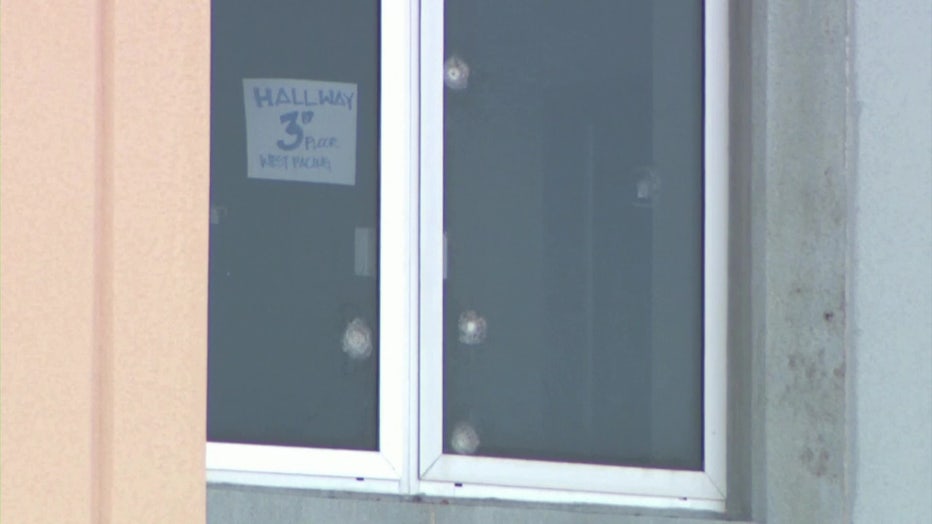 Multiple bullet holes riddle a third-floor window in the 1200 building at Marjory Stoneman Douglas High School in Parkland, Florida, where 17 students and staff were murdered in 2018.

Building to be demolished

Prosecutors, who rested their case following the jury's tour, hope the visit will help prove that Cruz's actions were cold, calculated, heinous and cruel; created a great risk of death to many people and "interfered with a government function" — all aggravating factors under Florida's capital punishment law.

Under Florida court rules, neither the judge nor the attorneys were allowed to speak to the jurors — and the jurors weren't allowed to converse with each other — when they retraced the path Cruz took on Feb. 14, 2018, as he moved from floor to floor, firing down hallways and into classrooms. Prior to the tour, the jurors had already seen surveillance video of the shooting and photographs of its aftermath.

The building has been sealed and was surrounded by a 15-foot chain-link fence wrapped in a privacy mesh screen fastened with zip ties. It looms ominously over the school and its teachers, staff and 3,300 students, and can be seen easily by anyone nearby. The Broward County school district plans to demolish it whenever prosecutors approve. For now, it is a court exhibit. 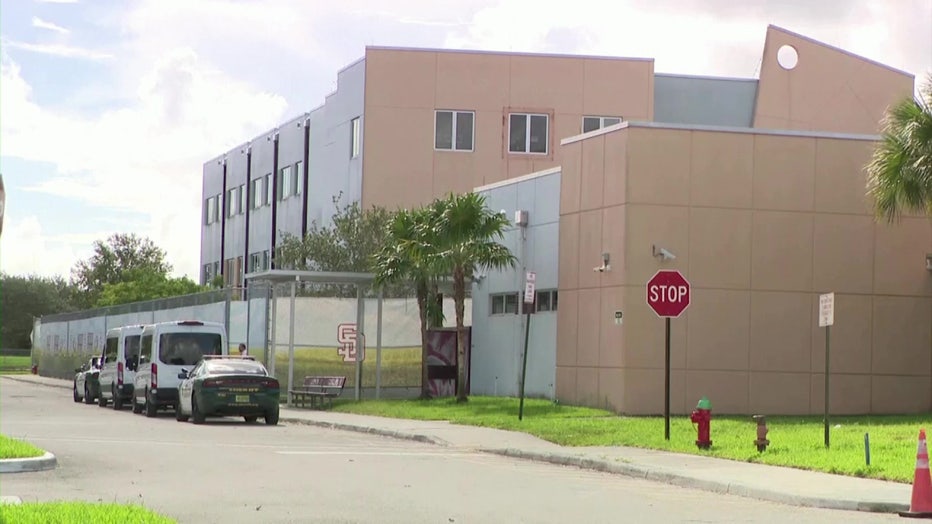 The 1200 building at Marjory Stoneman Douglas High School in Parkland, Florida, which has been fenced off since the mass shooting on Feb. 14, 2018. Nothing inside has been changed, except for the removal of the victims' bodies and some personal items

"When you are driving past, it's there. When you are going to class, it's there. It is just a colossal structure that you can't miss," said Kai Koerber, who was a Stoneman Douglas junior at the time of the shooting. He is now at the University of California, Berkeley, and the developer of a mental health phone app. "It is just a constant reminder ... that is tremendously trying and horrible."

Cruz, 23, pleaded guilty in October to 17 counts of first-degree murder; the trial is only to determine if he is sentenced to death or life without parole.

Miami defense attorney David S. Weinstein said prosecutors hope the visit will be "the final piece in erasing any doubt that any juror might have had that the death penalty is the only recommendation that can be made."

Such crime site visits are rare. Weinstein, a former prosecutor, said in more than 150 jury trials dating back to the late 1980s, he has only had one.

In most trials, a crime scene visit wouldn’t even be considered because years later it's not the same place as when the crime occurred and can give a false sense of what happened. But in this case, the building was sealed off so it could be done.

Cruz’s attorneys have argued that prosecutors have used what they assert is provocative evidence, including Thursday's visit, not just to prove their case, but to inflame jurors’ passions. 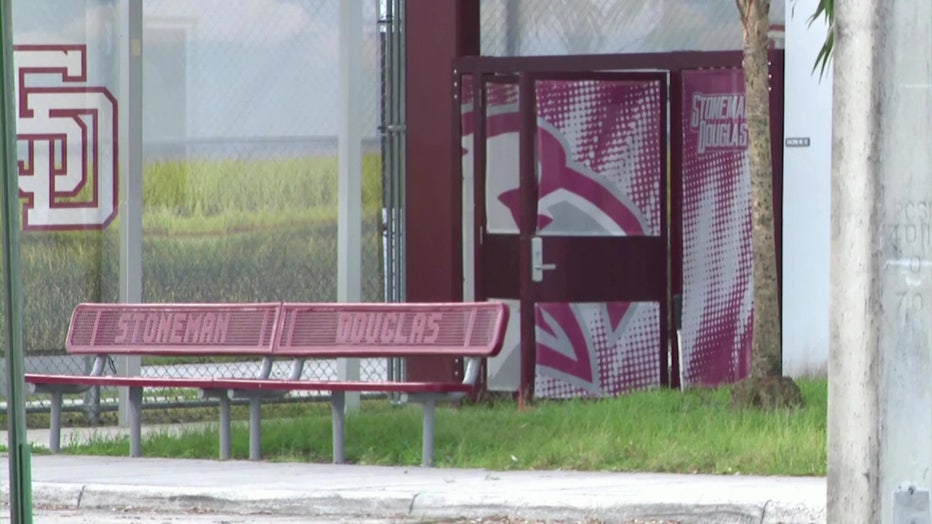 The front door of the 1200 building at Marjory Stoneman Douglas High School in Parkland, Florida, which has been fenced off since the mass shooting on Feb. 14, 2018. Nothing inside has been changed, except for the removal of the victims' bodies and s

After jurors returned to the courtroom Thursday, the mothers of two victims testified that the massacre permanently cast a pall over not only every Valentine’s Day but other important family celebrations.

Helena Ramsay, 17, died on her father’s birthday. "That day will never be a celebration and can never be the same for him," her mother, Anne Ramsay, said.

Hui Wang, whose 15-year-old son Peter was killed, said the shooting occurred the day before Chinese New Year. A planned celebration was canceled that year and every year since then.

"This day of unity became a day that hurts the most," she said.

RELATED: At Parkland shooter's trial, grieving father erupts in anger on the stand: 'This is not normal' 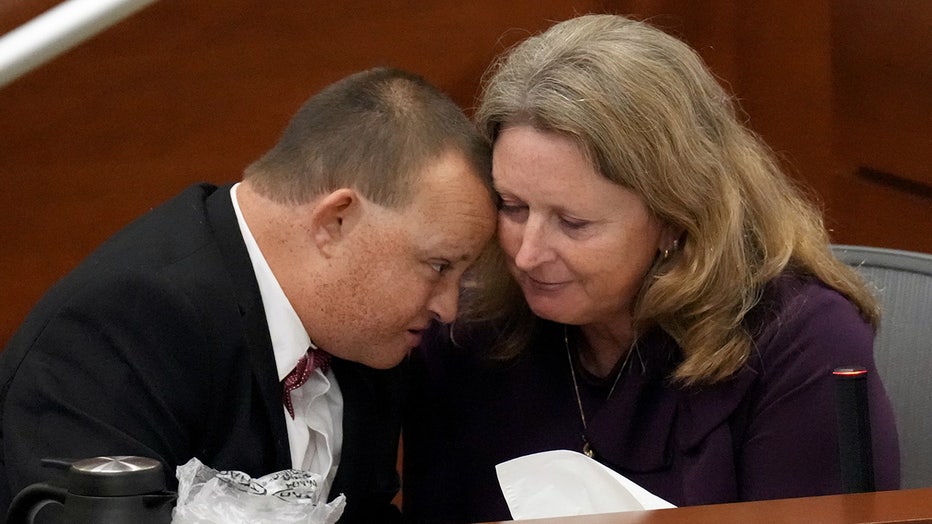 Corey Hixon leans in close to his mother, Debbie Hixon, while giving his victim impact statement during the penalty phase of the trial of Marjory Stoneman Douglas High School shooter Nikolas Cruz at the Broward County Courthouse August 4, 2022 in For

The wife of athletic director, Chris Hixon, and their 26-year-old son, who has special needs, also spoke on the fourth and final day jurors heard from victims’ families. Hixon, a 49-year-old Navy veteran, died charging into the building trying to stop Cruz and protect the students.

Corey Hixon described a weekly ritual of getting donuts with his dad.