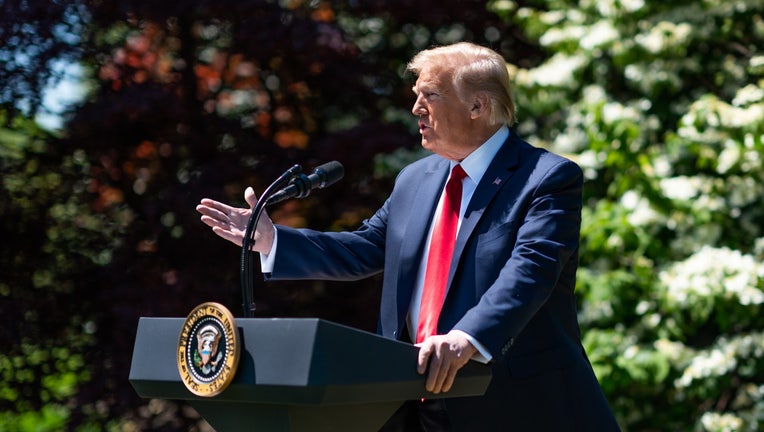 WASHINGTON - As America grapples with racism in its past, President Donald Trump lined up squarely Tuesday with those who argue that the pendulum has swung too far in favor of removing statues and other symbols of that flawed history, saying mistakes will be repeated if not learned from and understood.

Trump's campaign also sees the divide over this latest cultural flash point as a way to boost the president's standing, which has suffered during his handling of the coronavirus outbreak and the protests over racial injustice that followed George Floyd's death in Minneapolis.

After weeks spent demanding “law and order” in response to the protests sparked by Floyd's death by police, Trump began to draw a line in the sand.

He promised executive action to protect monuments after some statues of Confederates and other historical figures with checkered life stories were angrily brought down from parks and other places of public prominence.

Trump said he wants the maximum punishment available under federal law — up to a decade in prison — for those who destroy or tamper with statues on public property that commemorate anyone who served in the U.S. military. He said the executive order would “reinforce” existing law.

“We are looking at long-term jail sentences for these vandals and these hoodlums and these anarchists and agitators,” Trump said, referring to protesters who have vented their anger over racial injustice by toppling statues of figures tied to America's racist history.

He spoke out after an attempt Monday night to bring down a Lafayette Park statue of Andrew Jackson, one of Trump's favorite presidents, was foiled by police in the park across from the White House. Trump called it a “sneak attack” on the statue of Jackson, who owned slaves and was ruthless in his treatment of Native Americans.

“We should learn from the history,” he told Fox News in a taped interview broadcast Tuesday. “And if you don’t understand your history, you will go back to it again."

Trump's campaign sees the attempts to remove statues as a potential presidential lifeline. The campaign argues that liberals are dramatically overreaching by embracing calls to “defund the police” and remove statues of American icons taught in history books.

Related: Pelosi orders removal of Confederate portraits from US Capitol

At his Tuesday address in Phoenix to a gathering of Students for Trump, the president sought to tie the “radical left” to efforts to demolish monuments, while praising police for thwarting the Monday night attempt to topple the Jackson monument.

“If you give power to people that demolish monuments and attack churches and seize city streets and set fire to buildings, then nothing is sacred,” Trump said. “And no one is safe."

Trump’s prior defense of Confederate statues and military bases named after such figures amounted to a political risk in the current climate. But aides now believe the president has found an unexpected new attack line against Democrats as the effort to remove symbols has spread in some places to include the likes of Presidents Ulysses S. Grant, Jackson and George Washington.

Though all three figures were flawed individuals, Trump's campaign believes he can use them to wage a culture war and position the president as the defender of a way of life that is threatened by demographic change and generational shifts in views on issues from marriage to racial justice.

Calls to overhaul policing and confront lingering racial inequality may be bipartisan, but Trump's reelection team believes the most aggressive steps being pushed by some Democrats will turn off centrists and energize the president’s base -– many of whom share his avowed commitment to safeguard symbols of the nation’s past. A White House official and a campaign aide outlined the president’s thinking speaking on condition of anonymity because they were not authorized to discuss the matter publicly.

Senate Majority Leader Mitch McConnell on Tuesday cast the “lawlessness” of the attacks on statues as a cultural phenomenon among “far-left radicals” in need of a history lesson.

“Our founding fathers are being roped to the ground like they were Saddam Hussein,” McConnell said, referring to Iraq's former authoritarian leader. Iraqis celebrated the end of Hussein's government by toppling a statue of Hussein in Baghdad in April 2003.

McConnell, R-Ky., criticized protesters for doing the same to statues of Washington and Thomas Jefferson. And he marveled at efforts to take down statues of Grant, the “general who crushed the Confederacy, the president who used federal force to fight the Klan. They, too, have been placed on the historical hit list for this new Red Guard that nobody elected.”

Sen. Tim Scott of South Carolina, the chamber's only Black Republican, also decried the toppling of statues but said celebrating “all of our history would be crazy.”

“I’m not going to celebrate all of our history because all of it shouldn’t be celebrated,” Scott told Fox News on Tuesday. “But we should remember it.”

Wenola Wade, a white resident of the District of Columbia, said she’s frustrated that “we’re not far enough along” in dealing with systemic racism but added that “we can’t take down every single statue. That's stupid."

“To me, that takes away from what the real message is,” said Wade, 75, who was walking near Lafayette Square around midday hoping to see some of the protesters' posters.

Daryl Colter, an African American who lives in a Maryland suburb, brought his 5-year-old daughter to a street near the White House that the city has renamed as Black Lives Matter Plaza as an educational moment.

He said he wants leaders from the government and the protest movement to get together and have discussions about the Jackson statue and others, but “you can’t just go around taking it into your own hands and just tear something down.”

“Defacing, tearing it down, it’s going against the cause,” Colter said.

Related: Petition calls for all Tennessee Confederate monuments to be replaced with statues of Dolly Parton

American University history professor Alan Kraut said he and some of his colleagues have used the statues as teaching tools but that a more appropriate question amid the renewed scrutiny is whether their physical destruction makes society better.

"Do you enrich society and social opportunity and social justice by tearing down these statues or is this just a feel-good moment?” Kraut asked.

The White House declined comment on when Trump would issue the executive order.