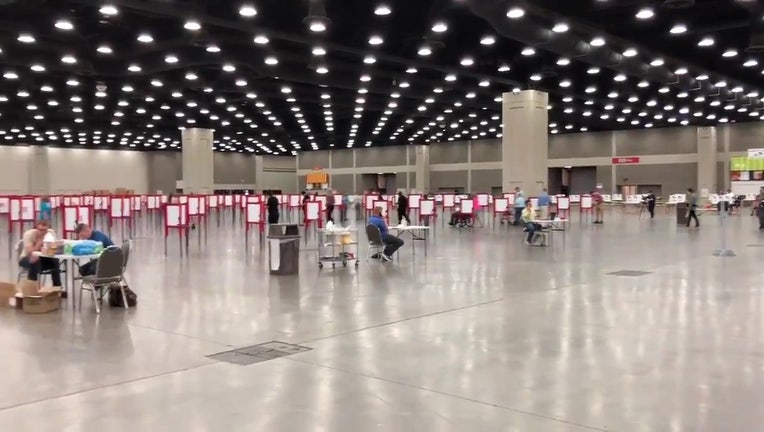 LOUISVILLE, Ky. - With only one polling place designated Tuesday for Louisville, a city of 600,000 people, voters who didn’t cast mail-in ballots or show up early could face long lines in Kentucky’s primary, the latest to unfold as the pandemic triggers unprecedented election disruptions across the country.

The outcome of a competitive Democratic U.S. Senate primary could hang in the balance if Election Day turnout is hampered in Louisville — the hometown of Charles Booker, who’s mounted a strong late challenge against presumed front-runner Amy McGrath.

“If Charles Booker barely loses, I think the integrity of that election is in question,” Republican state Rep. Jason Nemes said Monday.

The primary’s winner will go against Senate Republican leader Mitch McConnell, who isn’t expected to see a serious GOP primary challenge, in November.

Nemes sued to get more in-person voting locations in the state’s most populous counties. A federal judge denied the request days before the election.

The surge of absentee ballots could cause waits of another sort Tuesday, as some counties have said they won’t release vote totals before June 30.

Kentucky turned to widespread mail-in absentee voting in an agreement between the Democratic governor and Adams in response to the coronavirus outbreak. But many voters not requesting absentee ballots will head to the polls Tuesday.

Many states pushed their elections back to manage an onslaught of poll worker cancellations and consolidation of polling places. They also sought time to push more voters to cast absentee ballots.

State board of elections spokesman John Conklin said he hopes the consolidation plan will have “minimal” impact on voter turnout and access.

State election workers were trying to get 1.8 million absentee ballots to New Yorkers. County boards of elections have scrambled to process 11 times as many ballot applications as they did for the 2016 primaries without extra state funding, Conklin said.