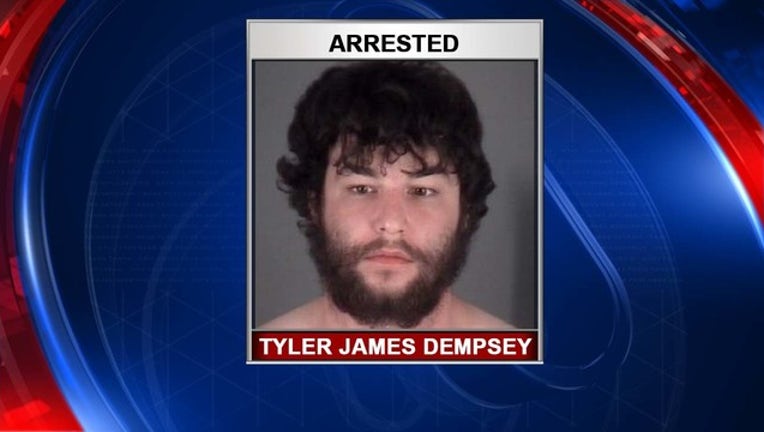 SPRING HILL (FOX 13) - A Spring Hill man has been accused of having sex with at least one 12-year-old girl, deputies say, after meeting her, and two teenagers through a new cell phone app called, Whisper.

Pasco County deputies announced the arrest of 23-year-old Tyler James Dempsey on Wednesday morning. During a press conference, Sheriff Chris Nocco said the incident occurred over the weekend. The three girls, ages 12, 14, and 15, created a post in the Whisper app, and that's where Dempsey made contact with them.

“The scary thing about Whisper is you can be anonymous. You can post things, basically on a chalkboard," he said during the press conference, "and nobody knows whose communicating but then they can directly go to each other after they look at the board.”

Dempsey asked them if they wanted to party, Nocco said. They said they did, and advised them they were all 15 years old. Dempsey picked them up and took them to his sister's boyfriend's apartment on Little Road. While they were there, he gave them drugs and they smoked weed, Nocco added.

In a form of street slang, Dempsey asked the 12-year-old if she wanted to have sex, Nocco said, but the "12-year-old didn't know what that slang was."

The enter another part of the apartment where the sexual intercourse occurred, the sheriff said, and after the act was done, Dempsey transported the girls back to where he picked them up.

On Monday, the 12-year-old reported the incident to a school counselor, and that's when Pasco County investigators became involved, they said. At first, Dempsey denied the allegations, but when investigators approached him with evidence, he admitted to the sexual act, they say.

Dempsey has been charged with sexual battery, detectives say, and are still trying to determine if there are other victims

Investigators say the Whisper app is fairly new and has been used by children in the past two months. They said that although posts may appear to be anonymous, geolocation can help anyone determine the identity and location of the poster.

Nocco warns parents to be alert with phone apps that allow communication with strangers, and compares these apps to any suspect who may driving around a neighborhood trying to lure children.

“It’s scary to think that somebody can just be picking up these young girls," he said, "it should be no different in our day and age with social media. They make it much easier now.”

Detectives say Dempsey was discharged from the U.S. Army, and he told them he worked as a military police officer while stationed in Germany. Investigators are not sure the cause of the discharge.