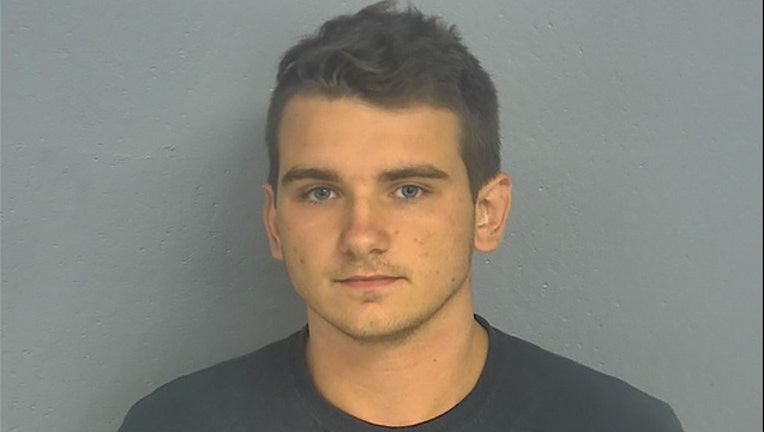 SPRINGFIELD, Mo. (AP) - Five days after 22 people were killed at a Walmart store in El Paso, Texas, panicked shoppers fled a Walmart in Springfield, Missouri, after a man carrying a rifle and wearing body armor walked around the store before being stopped by an off-duty firefighter.

Police on Friday identified the man as 20-year-old Dmitriy Andreychenko, who lived in the Springfield area. Andreychenko was being held in the Greene County jail on suspicion of first-degree making a terrorist threat.

Police did not immediately offer further details about the nature of the possible charge and said no further information would be available while the case is under prosecutorial review.

No shots were fired during the incident on Thursday. Andreychenko was arrested after he was stopped by an armed off-duty firefighter, Springfield police said. No one was injured.

The Springfield News-Leader quoted Lt. Mike Lucas as saying that Andreychenko arrived Thursday afternoon wearing body armor and military-style clothing. He walked inside the Walmart carrying a "tactical rifle," another gun and more than 100 rounds of ammunition, Lucas said.

Lucas said an off-duty firefighter held the suspect at gunpoint until police arrived about three minutes after receiving an initial call.

"His intent was not to cause peace or comfort to anybody that was in the business here," Lucas said. "In fact, he's lucky he's alive still, to be honest."

Security video from inside the store would be reviewed to determine Andreychenko's demeanor and a possible motive, he said.

"His intent obviously was to cause chaos here, and he did that," Lucas added.

Walmart issued a statement Friday that praised authorities for stopping the incident from escalating. It said Andreychenko is no longer welcome in its stores.

"This was a reckless act designed to scare people, disrupt our business and it put our associates and customers at risk," said spokeswoman LeMia Jenkins. "We applaud the quick actions of our associates to evacuate customers from our store, and we're thankful no one was injured."

The potential charges in the case will depend on Andreychenko's actions while he was in the store, said Dee Wampler, a longtime Springfield defense attorney and former Greene County prosecutor.

Carrying an assault rifle in public is not necessarily a crime, Wampler told The News-Leader.

"If he was looking at people in a menacing way or if he was saying something to other customers that was frightening to them - those would be factors" and could result in felony charges, Wampler said.

He also could be charged with a misdemeanor peace disturbance, or a different misdemeanor if he was told to leave the store and didn't, Wampler said.

Since January 2017, Missouri has not required a permit to openly or conceal carry a firearm for those 19 years or older. Roughly 30 states allow the open carrying of handguns and rifles and shotguns in public without a permit.

California, Florida and Illinois also generally ban the open carry of handguns, as do New York and South Carolina.

Springfield is about 165 miles south of Kansas City, Missouri.