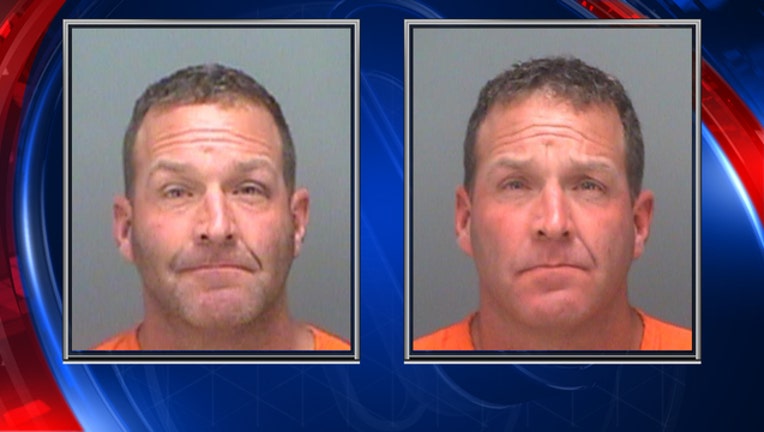 CLEARWATER, Fla. (FOX 13) - A man is facing charges for exposing and touching himself in public for the second time in one week.

Jason Tietz, 47, was first arrested on Wednesday January 9 following an incident at Hotel Zamora on St. Pete Beach. Police said Tietz was found naked and touching himself at the hotel's rooftop lounge.

Tietz was arrested but bonded out of the Pinellas County Jail shortly after.

Police said Tietz was caught again on Saturday, this time on Clearwater Beach.

"A group of teenage girls came up to me and told me that there was a gentleman fondling with himself in a cabana," Bauer said.

Bauer tried to approach Tietz to see what was happening.

"He just kind of walked off and started walking toward the street," Bauer said. "When I followed him and yelled 'Get back here, you're not going to get away with what you just did.'"

The teen chased the suspect into a nearby parking garage where he and a few good Samaritans were able to hold Tietz until police arrived. It wasn't all smooth sailing for Bauer though.

"We tried to pull him out and that's when I got punched by the gentleman," Bauer said. "I remember while I was laying on the ground the guy started to apologize."

Police responded and took Tietz into custody. He now faces several felonies, including lewd and lascivious exhibition and child abuse for punching Bauer.

Bauer's father said he was proud of his son, but hopes he doesn't make chasing suspects a habit.

"I'm proud of him, but he's got to be careful in the future of doing that because it could've gone wrong," C.J. Bauer said.

Arrest records show that the suspect is facing similar charges in South Dakota.