Jordan Baize plays the piano while surrounded by the destroyed home following a tornado in Bremen, Kentucky. Credit: Whitney Brown

BREMEN, Ky. - A man was captured sitting alone at a grand piano playing a melody while surrounded by his completely-destroyed home in Kentucky, a juxtaposition of beauty and tragedy.

Jordan Baize was recorded playing the piano keys at his home in the rural town of Bremen a day after a series of tornadoes slammed through parts of the state, killing dozens of people and leaving many others still unaccounted for.

His sister, Whitney Brown, posted the video to Facebook on Dec. 11, showing Baize sitting at his grand piano with the roof completely torn off overhead. Brown noted how she was at the torn apart residence helping to pack when she heard the peaceful soundtrack amid the chaos.

"I was standing in his bedroom packing anything I could salvage and I heard the most beautiful sound. Music. Jordan was sitting at his grand piano, playing the Gaither tune There’s Something About That Name. Everything around him was broken," Brown wrote on Facebook.

"The piano had water damage, it had missing keys, and he didn’t know I was filming, but still he used his gift to glorify his God the best way he knew how," she added. 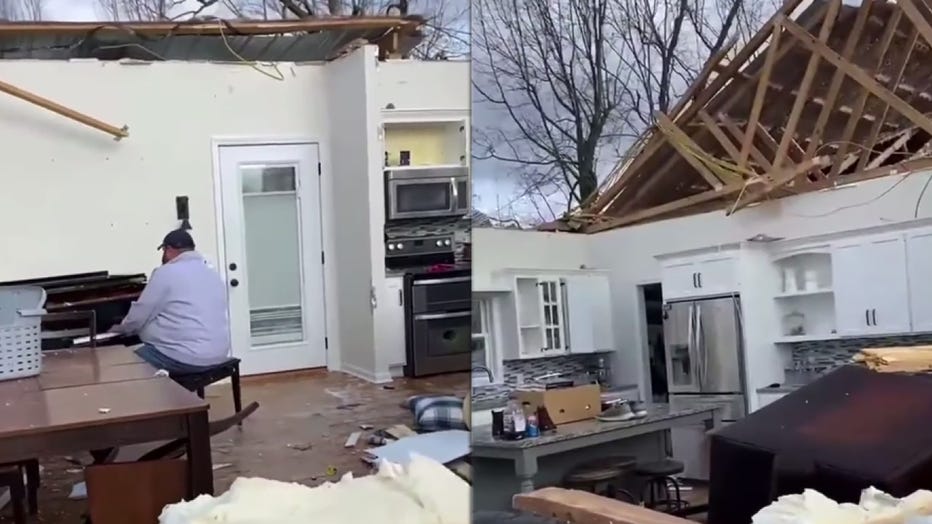 While Baize lost his home to the storms, Brown said he and his and his family "made it out safely."

The Dec. 10 tornado outbreak killed at least 88 people in five states — 74 of them in Kentucky — and cut a path of devastation that stretched from Arkansas, where a nursing home was destroyed, to Illinois, where an Amazon distribution center was heavily damaged.

The roof was ripped off an Amazon facility in Illinois during a possible tornado. Credit: RiverBender.com via Storyful

Kentucky Gov. Andy Beshear said the death toll could grow as authorities continued to work around debris that slowed recovery efforts. Nearly 450 National Guard members have been mobilized in the state, and 95 of them are searching for those presumed dead.

"With this amount of damage and rubble, it may be a week or even more before we have a final count on the number of lost lives," the governor said.

Debris from destroyed buildings and shredded trees covered the ground in Mayfield, a city of about 10,000 in the western part of the state. Twisted sheet metal, downed power lines and wrecked vehicles lined the streets. Windows were blown out and roofs torn off the buildings that were still standing.

Workers on the night shift at Mayfield Consumer Products candle factory were in the middle of the holiday rush when a tornado closed in on the facility. Initially, as many as 70 people were feared dead in the factory, but the company said Sunday that eight deaths were confirmed and eight people remained missing, while more than 90 others had been located.

Kentucky authorities said the sheer level of destruction was hindering their ability to tally the damage. Still, efforts turned to repairing the power grid, sheltering those whose homes were destroyed and delivering supplies.

A tornado ripped through Mayfield, Kentucky late Friday, leaving behind a trail of catastrophic and deadly destruction. Credit: Elora Harkness via Storyful

A fund set up by the state collected $6 million in donations, according to the governor. Kentucky First Lady Britainy Beshear launched a Christmas toy drive for children affected by the storm. She is asking for unwrapped toys, books, and gift cards of $25 that will be distributed to families in need.

State and local officials said it could take years for some of the hardest-hit areas to fully recover.

"This again is not going to be a week or a month operation, folks. This will go on for years to come. This is a massive event," Dossett said.

Five twisters hit Kentucky in all, including one with an extraordinarily long path of about 200 miles, authorities said.

In addition to the deaths in Kentucky, the tornadoes also killed at least six people in Illinois, where the Amazon distribution center in Edwardsville was hit; four in Tennessee; two in Arkansas, where the nursing home was destroyed and the governor said workers shielded residents with their own bodies; and two in Missouri.