TAMPA, Fla. - A Tampa father is opening up about his scary battle with COVID-19 in hopes of inspiring others to get vaccinated. The 40-year-old was perfectly healthy before contracting the virus but had to undergo a double lung transplant after it wiped out his ability to take in oxygen.

Vez Hang has a scar on his chest with a big message behind it. He is recovering at home with his girlfriend and their 5-year-old son. He's not quite at 100%, but he's feeling the best he's felt since his battle with COVID-19 began.

It was a scary months-long ordeal he now feels the vaccine may have been able to prevent.

"Get the vaccine. It's a matter of life or death," Hang said.

In April, he and his girlfriend of seven years, Yaneyri, with whom he shares a 5-year-old son, Mason, both tested positive for COVID-19.

A new study found that COVID-19 has wiped out years of progress made by several countries in improving life expectancy, including in the U.S. The report shows that life expectancy of American men has dropped by more than two years.

RELATED: COVID-19 lowers life expectancy, especially for men in the US, study shows

"One day I was in the shower and I couldn't smell my body wash and then I went on and looked in the mirror and my lips and my fingertips were blue," Hang recalled.

He rushed to the emergency room. The healthy 40-year-old father of one – who wasn't vaccinated – found himself struggling to breathe.

"If I didn't go in when I did, I probably would not have made it. It was like breathing concrete bricks for lungs," Hang said.

His situation was so dire, he needed a bi-lateral lung transplant. It's a procedure that involves removing both diseased lungs and replacing them with donor lungs. It was Hang's only option and something he needed as soon as possible. 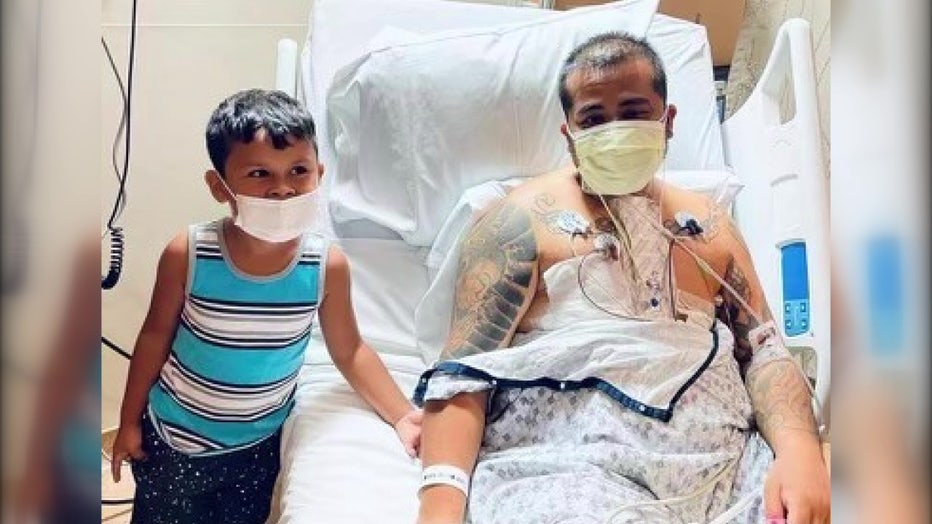 Vez Hang and his son, Mason

"His lungs had been damaged to the point where, without a maximum amount of oxygen only a hospital can provide, he was confined to a hospital setting," explained Dr. Kapil Patel, medical director for the Center for Advanced Lung Disease and Lung Transplant Program at Tampa General Hospital.

After weeks of searching, Hang found a donor in mid-June and underwent surgery at Tampa General Hospital, one of the busiest transplant centers in the country.

Hang is one of three TGH patients who've undergone COVID-19-related double-lung transplants. It's an experience that meant having to be away from his son for an extended period of time.

"He loves his daddy and his mommy, so for his dad to be away from him and Facetiming him and not being able to feel him, it took a toll on me, emotionally," Hang said.

Hang, who was initially hesitant to get the vaccine, wants people to know they shouldn't wait around and instead take action now to get the shot before it's too late.

"Not just for you, but for your family and loved ones. They deserve your presence so get the vaccination," he said.

Hang has since received both doses of the Pfizer vaccine. He hopes his story reaches people who are hesitant like he once was and motivate them to get the shot.